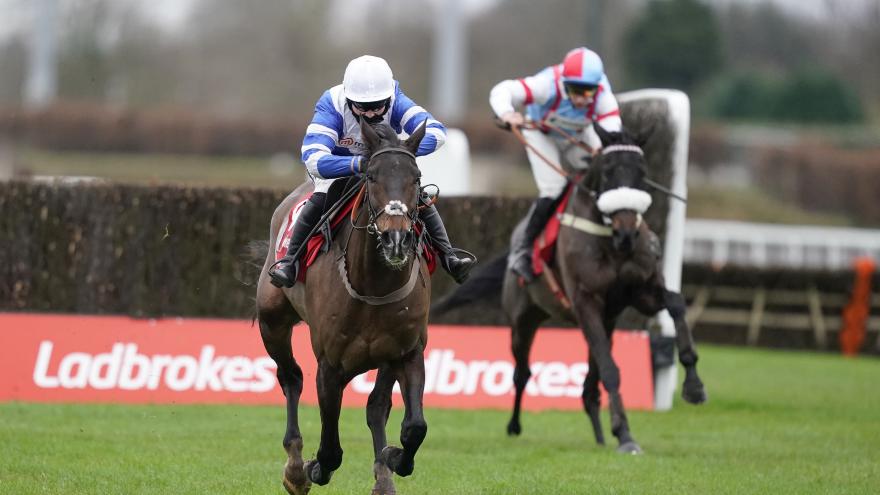 The 25-year-old Frost led from start to finish to give trainer Paul Nicholls his 12th success in the race at Kempton Park on the outskirts of London as more fancied contenders fell away.

"I have just won the King George!" said a clearly emotional Frost after crossing the finish line.

"He has just smashed everyone's expectations. I don't argue with him too much as he is his own personality," she told ITV Sport.

Frost had previously enjoyed a landmark Grade One success at the 2019 Cheltenham Festival on Frodon and the pair worked their magic again despite being the least fancied of Nicholls' four runners in the race.

"I cannot stress how much this horse means to me -- he is my life. You dream as a little girl to ride a horse like this," added Frost.

Victory in a race rated second only to the Cheltenham Gold Cup for quality has also made Frost the most successful female jockey over jumps as she was well aware.

"I talked to my brother in the United States last night and I said I was one away from being the woman jockey with the most winners over jumps.

"He said 'how cool would it be to do it in the King George?'"

Frodon's stablemate Clan Des Obeaux was bidding for a third successive win in the King George but could only finish third.

Cyrname, another fancied runner from the Nicholls' string, was pulled up under the hot pace set by Frodon, as was Real Steel.

It was left for Waiting Patiently under champion jockey Brian Hughes to provide the main challenge with a strong late burst. But Frost and Frodon were home by 2 1/4 lengths.

Due to coronavirus restrictions, the usual 20,000 crowd for the festive season special was absent, with Nicholls watching the race from the vacant Royal Box.

He had written off Frodon's chances before the race, particularly in view of a poor run by the 8-year-old at Aintree recently, but was proved wrong as he jumped brilliantly under Frost's skilled handling to pull off a stunning and historic triumph.