Female truckers have become TikTok influencers, and they're changing the transportation game 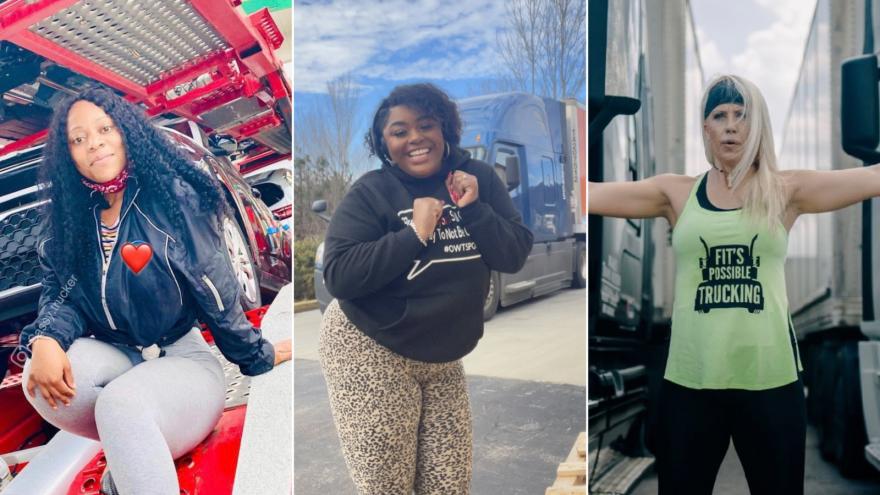 (CNN) -- Before Clarissa Rankin goes out on a job, a few things need to be in order. First up, a morning meditation. ("Dealing in transportation, you have to be calm to be a great driver," she says.) Then, she heads to the yard to hitch up Sparkle, her 2019 Freightliner Cascadia. Sparkle's a big girl: With a full load, the truck can weigh up to 80,000 pounds.]

In the back of the spacious cab, Rankin has set up what she calls her "mommy getaway apartment:" a twin bed, a stash of food, some decor, cleaning supplies, and a few wig stands. She occasionally likes to switch up her style on long hauls -- maybe long and wavy one day, and bright green or deep, curly red the next.

Once she wrangles Sparkle, she picks up her trailer and sorts out her first load. Rankin, 34, owns her own Charlotte-based trucking business, and typically travels within a 250 mile radius to Virginia, Tennessee, South Carolina and the like. Wherever she goes, she brings her nearly 1 million followers on TikTok with her, sharing the ups and downs of the job, giving motivational pep talks, and taking questions from fans.

"How in the world did you get into trucking?" is one she gets a lot. But there's another, better question she likes to answer:

It's a promising gig -- if you're ready to work hard

A growing number of women are entering the world of trucking at a time when demand for drivers is at a critical high. Many of them, like Rankin, are using their influence to educate other women and lay the groundwork for change in a crucial and often misunderstood industry.

They're also sharing an important message: Trucking is for everyone.

Women made up more than 10% of over-the-road truck drivers in 2019, according to a Women in Trucking survey. That's a sizeable increase over a reported 7.8% in 2018. Factor in different kinds of drivers and other non-executive transportation industry positions like technicians, driver managers and dispatchers, and the proportion of women rises to 43.4%.

This influx has been attributed to the work of inclusive industry groups like Women in Trucking, which spotlights women across the industry and recently partnered with the Girl Scouts of America to introduce a transportation badge.

It's also the result of women becoming keen to all the profession has to offer.

Rankin went into trucking after her first son was born with a heart defect. She was pursuing a criminal justice degree, but knew the money wasn't there.

"The bills were piling up, and I needed more income," she says. "Getting into trucking was a big gut decision."

Trucking is a tough business, and it requires plenty of training, education and hands-on experience to do well. Rankin says it's not unusual for a driver to make about $60,000 their first year. Her second year on the job, she passed six figures.

She now operates independently under a mega-carrier, and every evening she's able to come home and kiss her husband and two sons goodnight. Sometimes, for a change, she'll take a long-haul job to the northeast or down to Miami Beach.

Success stories show other women they can belong, too

The independence, the security, the income: There are a lot of benefits to being a truck driver. And for the social media-savvy, there's also the possibility of remarkable popularity. Truckers like Asmin de Loa, Shanya Urquidi and the women profiled here have five-to-six-figure followings on TikTok and other platforms.

Tierra Allen knew she wanted to get into trucking since she was a teenager, and enrolled in truck driving school at 18. Now 26, Allen travels all over the lower 48, logging 700 to 800 miles a day over 11 hours. She's known as the Sassy Trucker on social media, and like others in this burgeoning transportation sisterhood, she loves to poke holes in dusty trucking stereotypes.

Allen's TikTok is filled with videos of her working on her truck, or sharing tips on how to dress and eat healthy on the road. She says it's important for her mental health to stay nourished and take care of her appearance on long hauls. By sharing that side of herself, she's showing other women that you don't need to look or act a certain way to be a good truck driver.

"I like to show that you can still be feminine in a male-dominated field, and a lot of people like to see that," she says.

There are drawbacks to that, too. Rankin and Allen both say they get unwanted comments from men while on the job. Oftentimes, people don't believe they're really drivers. Rankin says a man even told her he wouldn't hire her as a driver, hypothetically, because of the way she dressed.

"I would say it takes a thick skin to work in the trucking industry, because we go through a lot," Young says. "But I want to motivate others and hopefully see more women get out of the road and start driving."

While it's a challenge, trucking influencers often use these difficult moments to speak on grander goals: Self-empowerment, confidence, resilience, and the courage to break into roles that aren't always welcoming to women.

The trucking industry is in a tough spot right now. Carriers were already being squeezed by a driver shortage before the pandemic, and everything that's happened since has just made it worse. The US was in need of about 60,000 drivers in 2019, according to the American Trucking Associations.

It's just one of the reasons companies and industry groups are trying to recruit more and more women and other underrepresented groups into the trucking fold.

But an increase in women means more for the industry than just warm bodies behind a wheel. If the female trucking influencers of social media are any indication, women could also be the key to solving age-old problems weighing the industry down, like driver health and retention.

Candace Rivers' involvement with trucking began, fittingly, on Interstate 20 not far from her hometown of Oxford, Alabama. Rivers, 37, is a fitness instructor and studio owner, but felt a sudden, spiritual call to extend her work to truckers.

She started researching health issues facing truckers, and was floored by what she found.

Long haul truck drivers are twice as likely to smoke or be obese compared to other US workers, according to research from the National Institute for Occupational Safety and Health. They report more instances of potentially life-shortening conditions like diabetes and high blood pressure, and are at constant risk of fatigue and chronic injury. Rivers explains they are also at high risk of blood clots from sitting for long hours, and that can lead to stroke or aneurysms.

Any of these risks could easily take drivers out of work and off the road -- bad for the driver, bad for the industry.

"It broke my heart," she says. "So many drivers are sacrificing their life and their bodies for their families and to get people what they need."

Now, Rivers runs Fit's Possible Trucking, a fitness company that helps truckers stay active and eat healthy on the road. Several companies have expressed interest in integrating her programs into their health initiatives, and she plans on getting her own truck and setting up wellness events across the country.

To do that, Rivers is currently in training to get her commercial driver's license. She says one reason women may not consider trucking as a career option is because they don't know how many opportunities there are.

"There are so many local jobs for CDL holders that make a lot of money, and women can drive just as well as men," she says. "This industry is built for more than just the people they think it's built for."

She's sharing her CDL journey, as well as wellness and fitness advice, with her large social media followings. Like other trucking influencers, she knows sometimes all people need is a little inspiration, "somebody that's speaking life into you," as she says, to pursue something new, something a little scary -- something that could change their lives for the better.

The key is showing people that they can do it, whether they wear old baseball caps or mink eyelashes. And if the road is opened to them, a new generation of truckers could come rolling in, with fresh ideas and fresh solutions in tow.