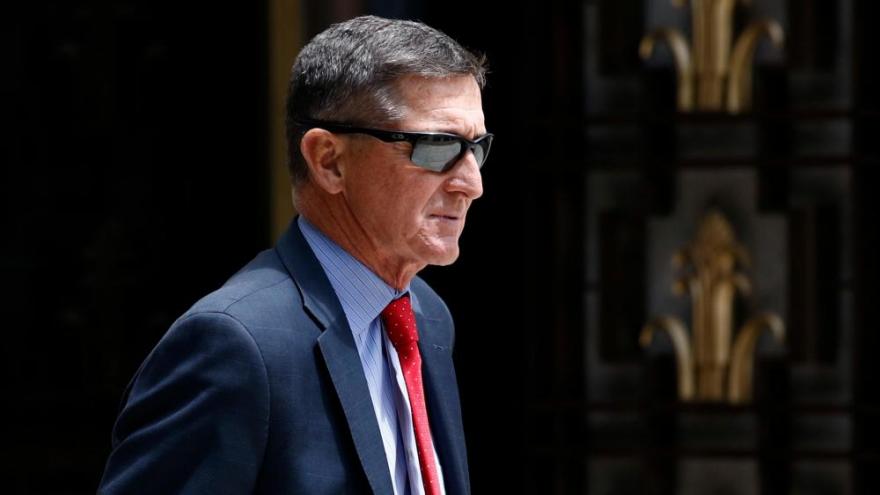 The court filing on Thursday to drop former national security adviser Michael Flynn's criminal case used the attorney identification number for the previous US attorney, a technical error that adds to the twists of the dramatic reversal by the government.

(CNN) -- The court filing on Thursday to drop former national security adviser Michael Flynn's criminal case used the attorney identification number for the previous US attorney, a technical error that adds to the twists of the dramatic reversal by the government.

The bombshell court filing was signed only by interim DC US attorney Timothy Shea, a political appointee who used the court identity number of his ousted predecessor Jesse Liu. The incorrect ID number is a technical error that may need to be fixed before the judge weighs in.

Shea's filing on Thursday -- undoing more than two years of work from special counsel Robert Mueller's team and his own office's work on the case -- shocked lawyers across the country, who alleged the undermining of the rule of law for President Donald Trump's political gain. Shea's signature on the document already raised questions about who within the Justice Department prepared it, why other prosecutors didn't sign the filing, and why the lead prosecutor on the case withdrew from it an hour before its submission.

A Justice Department official told CNN on Saturday that the ID number under Shea's name was a clerical oversight. The official said it was the mistake of a staffer who submitted the filing to the court on Shea's behalf -- but who didn't sign it herself. The official said Shea was part of a team who wrote the document, and declined to explain why the career prosecutor, Jocelyn Ballantine, who signed several other recent filings in the Flynn case, didn't sign it.

People close to the DC US attorney's office said the mistake isn't one trial lawyers in that office would likely make. And they pointed to the fact that no other lawyer in that office signed the dismissal request as a possible indicator the document was prepared elsewhere, perhaps at the Justice Department headquarters, where Attorney General William Barr was closely managing the Flynn review.

Shea has been previously criticized for doing Barr and Trump's bidding to go easy on associates of the President, first in the case of convicted Trump friend Roger Stone, where Barr directed Shea to override the sentencing recommendations of career prosecutors in Shea's office. The four prosecutors refused to sign Barr's sentencing revision. Now with Flynn, no career prosecutor stepped up to sign the document dropping the case.

Typically, the procedural filings of attorneys of record in court cases rarely draw public attention -- and the bar registration numbers even less so. But in the prosecutions of Flynn and Stone, which attorney is signing the filings has become a surprising signifier of unrest between career prosecutors and Trump's handpicked leadership in the main Justice Department and the Washington, DC, branch Shea leads.

The New York Times first noted the incorrect ID number on the filing.

A team of Justice Department prosecutors began putting the filing together early this week, according to a person familiar with the matter. Shea hadn't noticed the error until Friday night, more than 24 hours after it was filed, and the US Attorney's Office now plans to fix it, the Justice Department official said.

The flub now could draw the attention of the judge, Emmet Sullivan, who has yet to weigh in on the US Attorney's Office's attempt to drop Flynn's case even after the former national security adviser said under oath he was guilty of lying to the FBI. Though the Justice Department now says it doesn't want to prosecute Flynn, Sullivan has the authority to keep the case alive, asking for more explanations. He previously accepted Flynn's plea -- after Flynn told the judge he wasn't entrapped by the FBI and knowingly lied to them -- and reviewed evidence in the case, rejecting Fynn's assertions that the FBI acted inappropriately when agents interviewed him in the West Wing about his contacts with Russia in January 2017. Trump has seized on the Justice Department's change toward Flynn as a way to undermine the broader Russia investigation.

Last week, a US attorney from St. Louis assigned to review the Flynn case this year, Jeffrey Jensen, presented Barr and Flynn's defense team with evidence he'd collected about the FBI's approach to Flynn and recommended that the charges be dropped, Barr told CBS News in an interview Thursday. Barr and Shea both agreed with Jensen's recommendation, Barr said.

Democratic members of the Senate Judiciary Committee on Friday called the Flynn case development evidence of political manipulation within the Justice Deparment, and asked the department's independent watchdog to investigate.

"Every career prosecutor involved in the case declined to participate in this mockery of justice, and no Justice Department official or outside expert can find a precedent for such a blatant abdication of the Department's responsibilities," Democratic Sens. Sheldon Whitehouse and Richard Blumenthal wrote to Justice Department Inspector General Michael Horowitz, who previously found the FBI's Russia investigation was properly opened.

In the Flynn case this week, the two career prosecutors who were publicly handling it, Brandon Van Grack and Ballantine, didn't sign the document. Ballantine sent it to the court -- as a trial attorney in the office, she had access to the court's electronic filing system -- while Van Grack, who oversaw Flynn's plea deal during the Mueller investigation, withdrew from the case an hour before the Justice Department announced it would drop Flynn's lying charge. Two other prosecutors who previously appeared before the judge in the case are no longer with the Justice Department.

As the interim US Attorney, Shea's name is on every recent filing of prosecutors in his office -- but US Attorneys rarely, if ever, submit filings themselves.

Shea is a registered lawyer in the District of Columbia but hasn't been registered in the DC District Court, the trial-level federal court for the area, explaining at least in one aspect why he personally couldn't submit the document electronically on Thursday.

Liu is a member of the DC District Court and was assigned the bar number, according to the court's records.

Liu left the US Attorney's job in DC and was replaced by Shea in January. She was twice nominated for other positions in the executive branch before the White House pulled those nominations in the wake of the Stone case, and she no longer works for the government. She declined to comment on Saturday.

Shea has not been confirmed by the Senate, so he is leading the office as an interim appointee selected by the President. He's been a practicing attorney in Washington, DC, since 1993, according to lawyer records. The legal industry largely regulates itself, and courts enforce their own strict procedural rules when attorneys come before them.