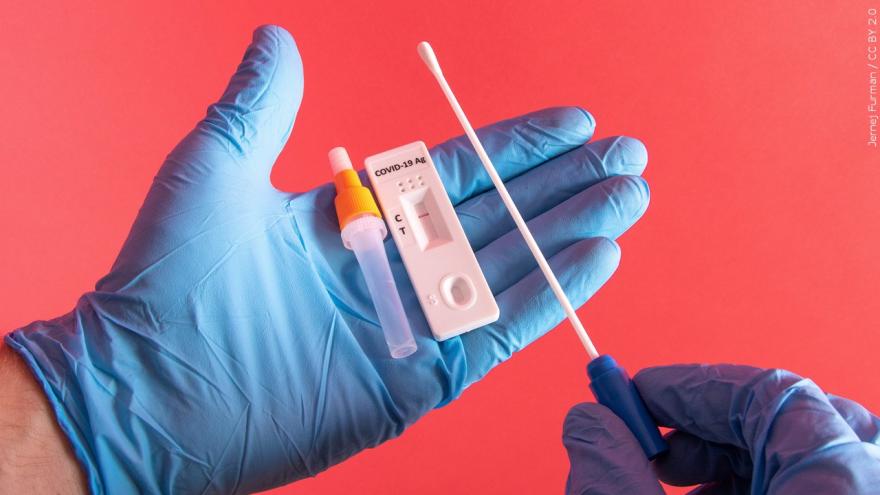 (CNN) -- With coronavirus cases surging once again, frustrated Americans are struggling to get tested days before Christmas as long lines and increased demand overwhelm some facilities across the country.

The catalyst has been the rapid spread of the Omicron variant, which has become the dominant strain in the US in a matter of weeks and has led to a slew of new measures to combat the spread.

With millions traveling or planning to join large family gatherings, there is a rush to get tested -- and many people are running out of luck, either with getting tests at clinics or with buying at-home test kits.

Long lines were seen this week in New York City, Boston and Miami, as well as Ohio and Minnesota.

At the same time, CVS Health and Walgreens -- the two largest pharmaceutical chain stores in the US -- are limiting the number of at-home Covid kits customers can buy due to significant demand, they announced.

The demand is only going to grow, said Michael Osterholm, director of the Center for Infectious Disease Research and Policy at the University of Minnesota.

"We do have some testing. But what we're going to need, I think, over the course of the next two to eight weeks is going to be remarkable. We are going to see this big surge nationwide," he predicted.

And while the Biden administration plans to provide 500 million new tests by next month, the holiday test surge is happening now.

A former assistant secretary of the US Health and Human Services Department is concerned the co pledge on tests will not meet the demand, he said.

"Unless we have a billion or 2 billion a month, I think we're still going to have to be selective to make sure that we keep people who can die from the disease from dying from the disease," Adm. Dr. Brett Giroir told CNN.

While experts urge more test availability, physicians are getting another tool to fight Covid-19: The US Food and Drug Administration on Wednesday authorized Pfizer's antiviral pill, Paxlovid, to treat the disease.

This is the first antiviral Covid-19 pill authorized for ill people to take at home, before they get sick enough to be hospitalized. It's authorized for people age 12 and older who weigh at least 88 pounds.

Paxlovid combines a new antiviral drug named nirmatrelvir and an older one called ritonavir. Pfizer last week released updated results that showed the treatment cut the risk of hospitalization or death by 89% if given to high-risk adults within a few days of their first symptoms. If given within the first five days of symptoms, the efficacy was similar: 88%.

Covid-19 cases in the US are rising: The country averaged more than 148,000 new cases a day over the last week, 23% higher than a week ago and back to levels last seen in mid-September, according to Johns Hopkins University data.

The Omicron variant has been identified in every US state, in addition to Washington, DC, and Puerto Rico, according to public statements from hospital systems and state officials in their respective states.

More than 69,700 Covid-19 patients were in US hospitals on Wednesday -- a number that's been trending up since it dipped to around 45,000 on November 8, according to Health and Human Services Department data.

The US averaged 1,324 Covid-19 deaths a day over the last week, 11% higher than a week prior, according to Johns Hopkins.

Hospital beds scarce in some parts of the country

The surge in cases has also led to a scarcity of hospital beds in pockets of the country.

In Delaware, ChristianaCare Hospital is running over 100% capacity, often reaching 110% to 115%, said its president, Sharon Kurfuerst.

"There are patients receiving care in hallways because that is the only place we have to put them in the emergency department right now," she said.

"That, compounded by the amount of Covid patients that we are seeing today is really straining our health care system and resources," she said.

In Ohio, six hospitals in the Cleveland area took out a page ad Sunday in the local newspaper, pleading for help.

"We need your help," the ad read. "We now have more COVID-19 patients in our hospitals than ever before. And the overwhelming majority are unvaccinated."

Getting vaccinated is the most effective tool to prevent serious illness. As of Tuesday, nearly 62% of the US population had been fully vaccinated, while just over 30% had received a booster shot, according to data from the US Centers for Disease Control and Prevention.

People who have been previously infected with Covid-19 and remain unvaccinated "should not assume that (they) have protection against Omicron," US Surgeon General Dr. Vivek Murthy said Tuesday.

"That's not enough to be able to come to a family gathering and say, 'This is just as good as being vaccinated,'" Murthy told CNN's Wolf Blitzer. "So, if you're not vaccinated, it is more urgent than ever to get vaccinated. If you are vaccinated, please get boosted."

As US health officials urge vaccination and boosters, Israel is rolling out a fourth vaccine dose for certain people: those ages 60 and over, medical workers and people with suppressed immune systems.

In Israel, those eligible for the fourth dose can receive it if at least four months have passed since the third dose, the nation's Prime Minister's Office said. Almost all vaccinated citizens in that country have received the Pfizer/BioNTech mRNA vaccine.

As to whether the US could move to a fourth dose eventually, CDC Director Dr. Rochelle Walensky told CNN this:

Now in the US, Covid-19 vaccine boosters mean a third shot for people who initially received two doses of an mRNA vaccine -- those made by Pfizer/BioNTech or Moderna -- or a second shot for those who received a single Johnson & Johnson dose. Adults may get boosted with any of the three vaccine brands, regardless of which they received initially; 16- and 17-year-olds are only eligible to receive the Pfizer booster.

Some local officials are again imposing new regulations to curb the spread of the virus.

In Chicago, customers at most businesses that serve food or drinks must show proof of vaccination beginning January 3, Mayor Lori Lightfoot said. The measure will apply to all customers over age 5 at restaurants, bars, gyms, theaters and other entertainment and sporting venues that serve food and drink.

"The unvaccinated are affecting the health, well-being and livelihoods of all the rest of us," Lightfoot said. "To control the spread, we have to limit the risk."

Atlanta Mayor Keisha Lance Bottoms also moved to reinstate the city's indoor mask mandate, while Massachusetts' public health department is recommending that all residents wear a mask indoors when not in their own homes, regardless of their vaccination status, officials said Tuesday.

And in New York, the police department is seeing an increase in the number of officers calling out sick, including fully vaccinated officers, according to numbers shared with CNN by a senior NYPD official.

Covid-19 isolation period could be reduced

"For example, if you get a health care worker who's infected and without any symptoms at all, you don't want to keep that person out of work too very long ... particularly if we get a run on hospital beds and the need for health care personnel," said Fauci, who is the director of the National Institute of Allergy and Infectious Diseases.

The isolation period also affects airline staffing, prompting Delta Air Lines officials to ask the CDC to reduce the period to five days as Christmas approaches -- adding that more than 90% of its workforce is vaccinated.

Officials are conducting analysis on whether it's safe to shorten the isolation period, Murthy said.