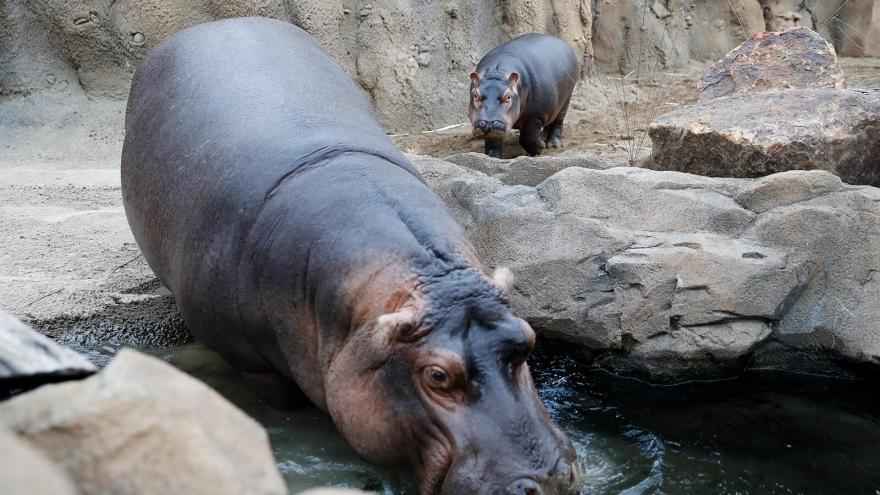 Fiona the hippo, the Cincinnati Zoo's social media darling, will soon be a big sister -- much to the zoo's surprise. Fiona, right, is shown here with her mother Bibi at the Cincinnati Zoo & Botanical Garden, in Cincinnati, Ohio, in January 2018.

(CNN) -- Fiona the hippo, the Cincinnati Zoo's social media darling, will soon be a big sister -- much to the zoo's surprise.

The zoo announced that Bibi, Fiona's 23-year-old mother, is pregnant.

"Bibi's big bundle of joy is expected to arrive late summer 2022," the zoo wrote on Twitter.

Fiona became an international celebrity after being born six weeks premature in 2017. Whereas typical hippos are born at around 100 pounds, Fiona was just 29 pounds at birth -- a record-breaking low weight for a hippo -- but managed to survive against all odds. The zoo used social media to share the vulnerable newborn's journey, attracting thousands of visitors who traveled to Cincinnati just to visit the baby hippo. Now a healthy adult, Fiona weighs a formidable 1,300 pounds.

Fiona's father, Henry, died in 2017, according to the Cincinnati Zoo. But in 2021, the zoo welcomed 18-year old male hippo Tucker, who quickly became "enamored" with Bibi, according to a press release.

Despite the couple's obvious romance, the pregnancy came as a surprise for zoo staff: Bibi was on birth control, according to the zoo.

"We weren't planning to welcome a baby this soon, but nature found a way and ignored our calendar," Christina Gorsuch, Cincinnati Zoo's director of animal care, said in the release.

"Most forms of contraception, in hippos or humans, is not 100% reliable," Gorsuch said. "The dose that was previously effective for Bibi did not prevent pregnancy this time."

Hormonal birth control has previously been used to control the population of invasive hippos in Colombia.

Although the pregnancy was unexpected, zoo staff are still excited to welcome Fiona's younger sibling.

"As most people know, Bibi's first baby, Fiona, was born six weeks premature and wouldn't have survived without the intervention of her human caregivers," Byrd said. "We are hoping for a full-term pregnancy and will be doing everything we can to support Bibi."

Scientists from the zoo's Center for Conservation and Research of Endangered Wildlife are already closely monitoring the pregnancy and have started Bibi on hormone supplements, the zoo added.