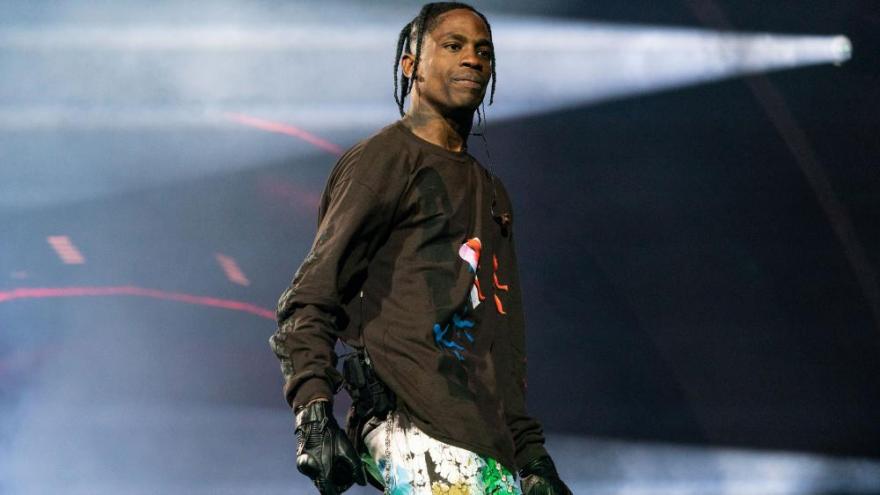 A bevy of lawsuits are being filed in civil court on behalf of those who attended headliner Travis Scott's Astroworld Music Festival. Scott is seen here in Houston on November 5.

(CNN) -- A 22-year-old woman who attended the Astroworld Festival in Houston has become the ninth person to die in the tragedy, an attorney handling her case said Thursday.

Shahani, a student at Texas A&M University, attended the concert with her cousin and her younger sister, according to cousin Mohit Bellani.

Shahani had been on a ventilator in critical condition days after she suffered injuries at the concert, which was headlined by Travis Scott.

Bharti was the glue that held her family together, said attorney Mohammed Nabulsi at a news conference announcing her death. She was a first-generation child of immigrants, he said. Bharti's sister said the concert served as her time to just have fun and let loose.

"For the first time in her life, she just wanted to have fun and that was taken from her," Namrata Shahani said.

Dozens of others were injured in a crowd surge at the music festival on Friday night.

A 9-year-old child was seriously injured, his family said, and is in a medically induced coma.

Survivors of the surge describe scenes where many attendees were pressed together and at times unable to stay upright.

Bryan Espinoza, who attended the concert with his brother Jonathan, said Wednesday he's had trouble sleeping since the tragic events unfolded.

"I saw people screaming in front of my face, just trying to fight for their lives, basically. Everyone's life was in danger and I just saw people passed out, bodies on the floor, just a lot of stuff you don't see on a daily basis," Bryan Espinoza said.

"At one point I thought I wasn't going to make it."

Jonathan Espinoza told CNN's John Berman on Thursday that as he and his brother walked to get their tickets scanned, "fans immediately bust down a fence."

"You have cops trying to stop them, but I mean, there's about 50 people that just break the fence down (and) immediately start running," he said.

"When you start off poorly, I don't get how you would expect to finish with success," said Jonathan Espinoza. The event "unraveled in chaos" from the moment he and his brother arrived, he said.

The president of the Houston Professional Fire Fighters Association said Thursday the district fire chief whose station was closest to NRG Park stopped by the Astroworld venue the morning of the concert but was denied access twice.

According to Patrick "Marty" Lancton, the district fire chief of Station 21 stopped by to walk through the venue to get a lay of the land ahead of Friday night's concert, something he said is "normal."

"As with any big, large-scale event he took a ride over and said 'hey, let's check everything out,'" Lancton said. "In the city of Houston, a district fire chief is usually over three or four stations. When a response is required in his area, he is the first to respond. He would be the one taking command if something happened and determine what resources are needed."

CNN has reached out several times to Contemporary Services Corporation, who handled security for the event, and has not heard back.

Houston Fire Chief Samuel Peña backed up the claims that the district chief was not let in.

But Peña went a step further, saying he'd like to see his teams be a part of the planning before the day of the event.

"I do need to have my people there in the planning, in the contingency planning," Peña said. "It's important for us to have a comprehensive plan that everyone understands."

The lack of professional emergency personnel at Astroworld was "absolutely a problem," Lancton said.

"What that really means is that whoever put the event on hired a third party medical company ... to handle any emergencies that are happening on the inside," Lancton said on CNN's "New Day.

The Houston Fire Department "had no command and controlled presence on this inside of the venue," but were nearby "in a support role," he added.

Lancton said the firefighters on-scene asked the hired emergency personnel if they had radios and were given a list of cell phone numbers. He said the fact the logistical emergency strategy relied on cell phones, not radios, was problematic because "seconds matter, communication matters."

"I don't know that cell phones are very reliable when you have fifty or sixty thousand people, especially when you have people that are dying," he said.

He said firefighters were primarily monitoring Houston Police Department radio traffic and noticed a growing tension from authorities on the ground. After not hearing any response over the radio to stated medical emergencies, the HFD personnel on standby chose to self-initiate a response.

"They took it upon themselves, when they started to hear radio traffic, and self-initiated a Houston Fire Department response and upgraded it to a mass casualty incident," he said.

As investigators and attendees seek to know more about what caused the deadly crowd crush, a bevy of lawsuits are being filed in civil court on behalf of those at the show.

At least 80 civil lawsuits have been filed in Harris County District Court in connection to the disaster as of Thursday, asking city officials, concert organizers and performers how the concert was ultimately allowed to continue as people were dying in the melee.

Police Chief Troy Finner said at a news conference Wednesday that the "ultimate authority to end a show (was) with production and the entertainer, and that should be through communication with public safety officials."

Authorities have said first responders began to receive word of injuries in the crowd around 9:30 p.m. and the show continued for another 40 minutes.

Finner claims their investigation has revealed police personnel told the production team in charge of the performance that CPR was underway on at least one individual and to stop the show. Finner did not specify who the production team is or the timing of the notifications.

Questions have also been raised regarding the actions of Live Nation, the show's promoter and organizer, as well as Scott, who has maintained he did not know what was happening in the crowd during his set.

"If the lights would have been turned on -- (if) the promoter or the artist called for that -- it would have chilled the crowd, and who knows? Who knows what the outcome would have been? But everybody in that venue, starting from the artist on down, has a responsibility for public safety," Peña told CNN on Monday.

Yet representatives of Scott are disputing characterizations made by city officials of his responsibility in the surge.

In a 56-page operations plan obtained by CNN this week, a clear chain of command in case of an incident is laid out, identifying the role of the executive producer as well as the festival director as the only individuals with the authority to stop the concert. The PDF obtained by CNN is marked Version: 0.1, and it is unclear whether it was the final version of the plan and when it was drafted.

"It was reported that the Operations Plan designated that only the festival director and executive producers have authority to stop the show, neither of which is part of Travis's crew," McPherson said in the statement.

McPherson also noted Finner's comments on Saturday that authorities had concerns over the show stopping early due to potential rioting from concertgoers.

Former Baltimore Mayor Stephanie Rawlings-Blake, who was introduced to Scott by a mutual friend, told CNN's Erin Burnett that Scott is "absolutely devastated" at what happened at the festival.

"His heart is bleeding for his fans," she said.

Speaking from Houston, Rawlings-Blake said that she spent over four hours with Scott on Wednesday and is working with him to ensure that they are speaking with city administration and the promoters.

"We're doing everything that he can do in his power to make sure that no fan ever loses their life at another concert," she said.

Finner said at Wednesday's news conference that it was too early to say for sure that charges would be filed over the disaster, but said investigators were "not going to leave any stones unturned."

The investigation into the crowd crush will "take weeks, possibly months," he said.

The chief clarified earlier reports and said there was no evidence a security guard at the festival had received a drug-laced injection, but rather was struck in the head and knocked unconscious.

And despite Finner saying Wednesday that an independent investigation is unwarranted, Harris County Judge Lina Hidalgo may direct a potential third party to do so.

"What happened at Astroworld this weekend was a horrific tragedy, and the families of victims deserve answers. There may well be criminal liability, and that is why we continue to fully support the Houston Police Department's criminal investigation," said Rafael Lemaitre, communications director for Hidalgo.

"At the same time, Harris County continues its process of identifying a separate independent, third party to look into any operational or administrative steps -- beyond anything criminal -- that could have been taken to prevent this from happening."

Clarification: This story has been updated with the district fire chief's full title.