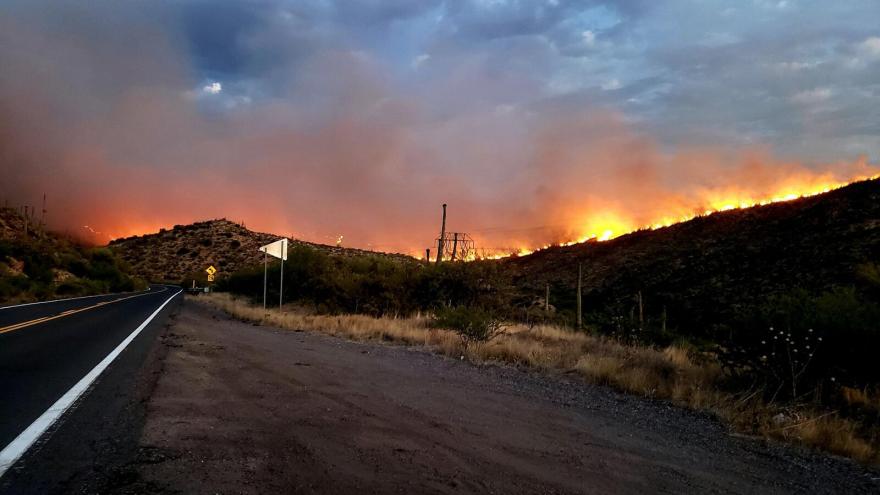 (CNN) -- Campfires and other activities were banned Friday on Arizona federal land as crews battle two massive wildfires that have charred more than 150,000 acres over the past week, officials said.

The Telegraph and Mescal Fires, both burning nearly 100 miles east of Phoenix, began earlier this month and continue to engulf the area.

The US Bureau of Land Management on Friday issued fire restrictions on the federal land it controls due to dry and hot conditions.

Under the new rules, people are prohibited from using a tool with an internal combustion engine -- such as a chain saw -- on such lands in the state. Smoking outdoors and shooting a gun other than for hunting reasons are also barred, BLM said in a statement.

"Violation of restrictions is punishable by fine, imprisonment or both. Violators may also be held personally responsible for reimbursement of fire suppression costs," the statement said.

The rules apply throughout Arizona except for the small portion of the state north of the Grand Canyon, according to BLM.

As of Saturday morning, the Telegraph Fire had scorched more than 87,000 acres and was 45% contained, according to the Interagency Incident Information Center, which described the blaze as a "fast moving and dynamic fire."

However, the fire's status was downgraded and residents of Top-of-the-World, Arizona, and the Oak Flats Campground were allowed to return to their homes, according to the Pinal County Sheriff's Office. Power was also restored to homes in the area.

Meanwhile, the Mescal Fire has burned more than 72,000 acres with containment at 82% as of Saturday.

Officials said that at one point, the area around the fires was so dry that firefighters trying to tame the blaze inadvertently sparked fires with their own heavy equipment.

The fires have been declared as emergencies, which has allowed the state to access federal funds. The Arizona Legislature is set to meet in a special session next week to consider spending more money for wildfire response.

Federal lands in Arizona are not the only in the Southwest at risk. In Nevada, the Sandy Valley wildfire in the Humboldt-Toiyabe National Forest is burning nearly 10 miles southwest of Las Vegas, BLM said.

BLM officials determined that a target shooting caused the Sandy Valley fire, which has burned more than 1,300 acres and was 40% contained as of Saturday.