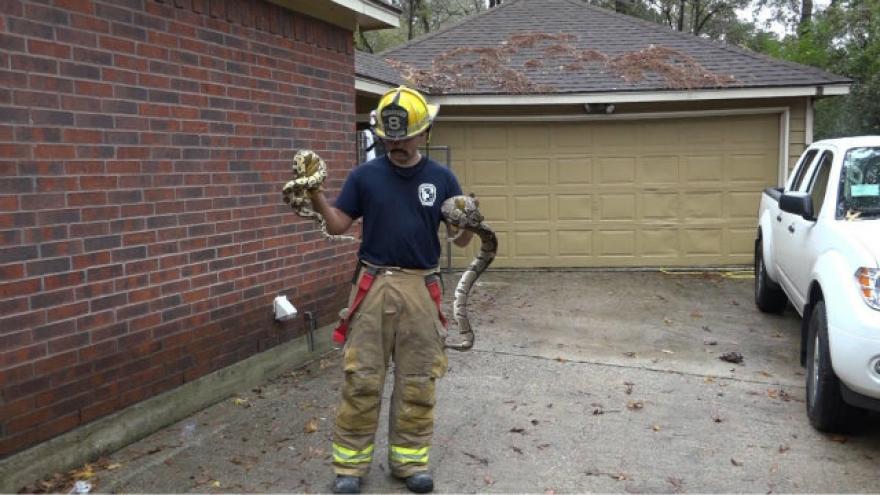 For many people, the thought of picking up a python or a boa constrictor is terrifying. But for some firefighters in Texas, no victim is too scary, or too scaly, to rescue. Photo courtesy Caney Creek Fire & Rescue / Facebook

(CNN) -- For many people, the thought of picking up a python or a boa constrictor is terrifying. But for some firefighters in Texas, no victim is too scary, or too scaly, to rescue.

Caney Creek Fire and Rescue of Conroe -- a suburb north of Houston -- responded to a house fire over the weekend that was caused by a Christmas tree left with its lights on. When firefighters entered the house they found more than 100 snakes and lizards, Fire Chief Raymond Flannelly told CNN.

"Not sure how many lizards we found, but the snakes were large enough to give anyone crawling through a smoke-filled house a heart attack," he said. Flannelly added that none of the snakes were venomous.

The reptiles -- which, according to CNN affiliate KTRK included several five- to six-foot-long pythons and boa constrictors -- were in glass cases but still needed to be carried outside the house. With the help of the home's owners, fire crews ferried the snakes to safety.

"A dog or a cat, that's one thing," Lieutenant Bobby Matthews with the Caney Creek Fire Department told KTRK. "But a snake, that's a whole other animal."

"Things firefighters have to deal with even if you don't want to!!" said Caney Creek Fire and Rescue in a post on Facebook.

The house endured severe damage and the family lost a lot of property, but they are happy the firefighters were able to rescue their pets, Flannelly told CNN.

"The homeowner wasn't willing to give a lot of information on why they had so many snakes. In fact, they told us the snakes don't like people in uniform," Flannelly added. "But as firefighters, we will do anything to help anybody."

Several reptiles died in the fire but the ones that were rescued were transferred to a local facility and are expected to be okay, KTRK reported.

"The guys that like or don't mind handling the snakes didn't mind doing it," Lt. Matthews told the affiliate. "They were more than willing to help the homeowner and the fire marshal get them out."

According to the affiliate, the family was not home when the fire started. Their two dogs were able to escape the fire as well.

And for Christmas, the Caney Creek fire department is only asking for one thing.

"We want people to make sure their smoke detectors work and just don't leave your Christmas tree with the lights on," Flannelly said. "Christmas is not here yet and we are already answering calls related to house fires caused by trees, and these are preventable fires."