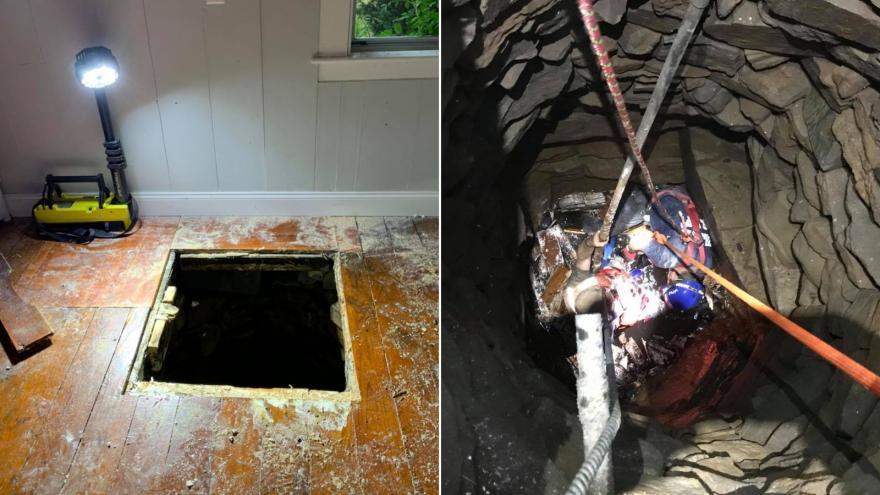 (CNN) -- Firefighters in Connecticut rescued a man that fell nearly 30 feet down into a well when the flooring of a home gave way from underneath him.

Christopher Town was helping move furniture into a friend's home in Guilford on Sunday when he fell into the well splashing into the cold water below, according to Guilford Police Department.

"So,I hear a crack and I looked down and the floor is giving way underneath me and then I'm falling, and I'm falling," Town told CNN affiliate WTIC.

He plunged into the abyss of the well, which was over 20 feet deep and 5 feet wide, according to Guilford Fire Department. The home Town's friend was moving into was built in 1843, and the well was likely located outside the home at the time, according to police. In 1981, an addition and some renovations were done to the home, the police said.

"At some point this well was covered with simple wood flooring and no subfloor or well cap," police posted on Facebook along with images of the rescue.

"It is important to note that some of these older, historical homes may have hazards that were not upgraded by current code."

Town was unable to touch the bottom of the well and was holding on to the stone wall to keep above the water as firefighters arrived onto the scene, officials said. Rescuers gave him a life jacket and set up a rope system to lift him out.

"The fire department was incredibly professional," Town told WTIC. "They did a wonderful job and saved my life basically. It's not a certainty that I would've died down there, but I was getting more and more hypothermic."

Town suffered minor injuries and was transported to the hospital. Police shared images on Facebook saying this was an unbelievable rescue and could have been fatal event.