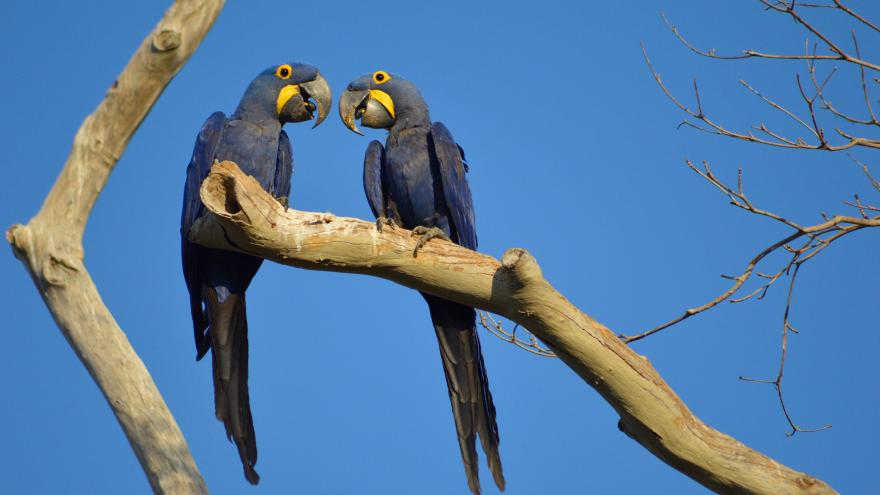 (CNN) -- A Brazilian sanctuary, home to 15% of the world's population of blue macaws, has been consumed by fires -- and there are fears for the well-being of the rare birds.

"It is very sad to see decades of my family work, years taking care and preserving nature, for this to happen," said Ana Maria Barreto, owner of the São Francisco do Perigara, a cattle ranch and bird sanctuary of more than 61,000 acres in Mato Grosso state.

More than 70% of the farm's vegetation was destroyed by the blaze, she said. "It is an unprecedented disaster."

Between 700 and 1,000 blue macaws lived on the ranch, she said. "It is the largest known population of free macaws in the world," Barreto told CNN.

The total world population of blue macaws is estimated to be about 6,500 birds, according to Arara Azul Institute, which advocates for environmental conservation. The birds are threatened with extinction and live in nature only in Brazil.

Most of the birds may have flown to safer locations, said Neiva Guedes, president of the institute. "They can manage to escape fires because they fly, but soon they will run out of food, and that is what we think will affect them most." The blue macaws survive on fruits and nuts and "as forests burn, so does their food," Guedes added.

The fires had raged since August 1. On Monday, officials said that blazes closest to the macaws' nesting areas had been brought under control, but that they could still re-ignite, given the high temperatures and parched conditions.

"Every day is a surprise," said Sergeant Rogério Perdigão, of the Mato Grosso do Sul Fire Department. "We cannot say that we won, because that is not how it works, but we will continue the battle."

He sent CNN a video showing macaws sitting on trees close to where the fire was recently extinguished.

"Any victory against the fires has to be celebrated," he told CNN. "Macaws are close to us all the time, they don't stop talking. It seems that they are thanking us," Perdigão said.

A protected region, rich in biodiversity

The sanctuary is located in the Pantanal, the world's largest tropical wetland area, which stretches across two states in Brazil, Mato Grosso and Mato Grosso do Sul. Consisting of more than 37 million acres, its rich biodiversity is recognized in Brazil's constitution and also by UNESCO.

But it's also a region that has been targeted for fires, aimed at clearing trees and brush to create pasture land.

On July 16, Brazilian President Jair Bolsonaro signed a decree banning fires in the Pantanal for 120 days, following pressure from dozens of international investors who threatened to divest from Brazilian companies unless steps were taken to curb the destruction.

But according to Brazil's National Institute for Space Research (INPE), there were 3,121 fires detected in the region in the first 15 days of August, compared with 1,690 for the entire month last year.

Carlos Rittl, the executive secretary of the Brazilian Climate Observatory, a coalition of civil society organizations, blames the government for failing to prevent fires. "The government has been reducing environmental surveillance since the beginning of Bolsonaro's government," he said.

That's compounded by the weather, which is drier than usual due to deforestation, he added. "Researchers are indicating this drier weather in Pantanal is due to the rise of Amazon deforestation, which lowers the level of humidity in Pantanal," he said.

At a meeting with leaders from neighboring Amazon nations last week, Bolsonaro insisted reports about fires in the Amazon were untrue and defended Brazil's preservation efforts. "Our policy is zero tolerance. Not only for common crime, but also for the environmental issue. Fighting illicit activities is essential for the preservation of our Amazon rainforest."

But for the owners of the São Francisco do Perigara, Ana Maria Barreto and her sister Maria Ignêz, the fires destroyed years of preservation efforts. In 2002, there were only 200 blue macaws on the farm. In recent years, they managed to quadruple that number, she said.

"It is very sad," Ana Barreto said. "We end up being very concerned about what is yet to come. If we are experiencing this in a protected area, what can we expect in the future?"