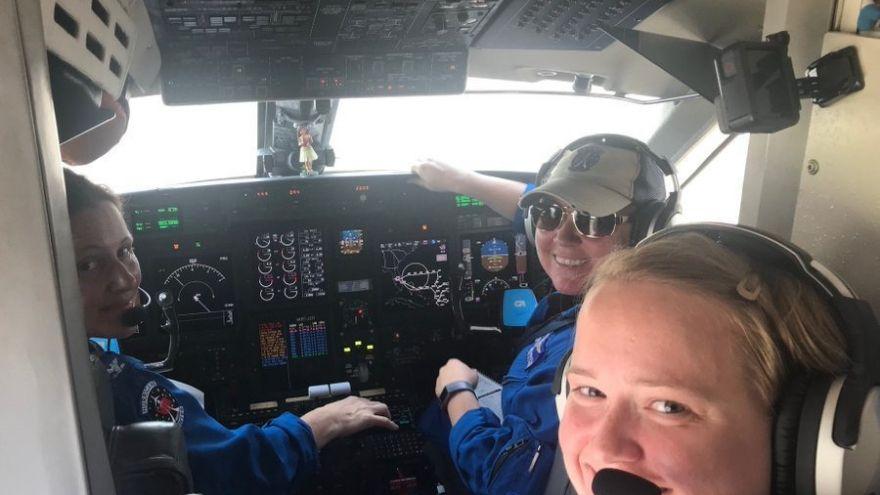 (CNN) -- The first all-female crew to conduct a hurricane reconnaissance mission for the National Oceanic and Atmospheric Administration (NOAA) took off Thursday.

The three-pilot crew -- Capt. Kristie Twining, Cmdr. Rebecca Waddington and Lt. Lindsey Norman -- were tasked with learning about Hurricane Dorian as it moved toward the US mainland.

It was a mission that lasted more than seven hours, according to Flightaware.com. The crew took off from and landed at Lakeland Linder International Airport.

Hurricane Dorian is forecast to hit the US mainland Monday evening into Tuesday morning as a Category 4 hurricane, which means it could be the strongest hurricane to strike Florida's east coast since Hurricane Andrew in 1992, according to CNN meteorologist Brandon Miller.

During the reconnaissance missions, scientists aboard NOAA's Lockheed WP-3D Orion four-engine turboprop aircraft deploy instruments that "transmit measurements of pressure, humidity, temperature, and wind direction and speed" of the hurricane and provide "a detailed look at the structure of the storm and its intensity," according to NOAA.

A state of emergency has been declared for all 67 Florida counties, and residents have been stocking up on supplies.

However, it's still not clear exactly where the storm will hit, experts say.

"There is a wide cone of uncertainty of the storm, especially since it is still days from landfall on Florida," said CNN meteorologist Rob Shackelford. The cone extends from Key West up to around Jacksonville, a distance of 500 miles, he added.