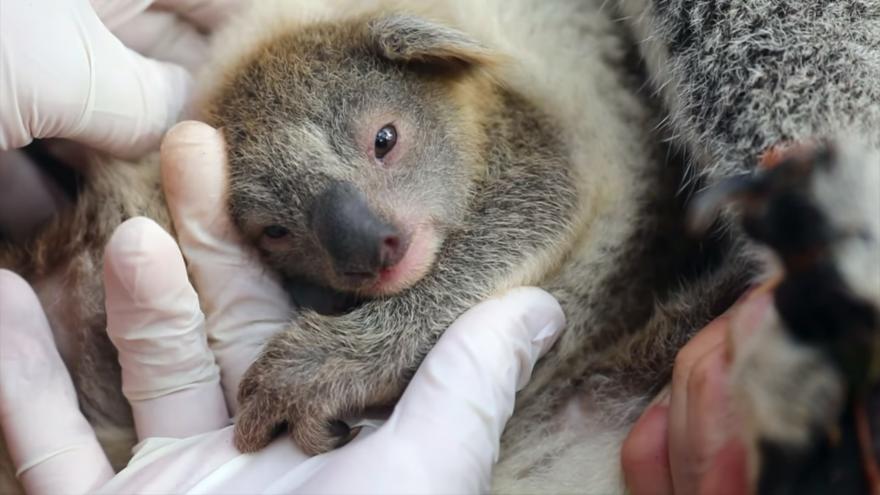 The park introduced Ash to the world in a Facebook video. Credit: From Australian Reptile Park/Facebook
By Jack Guy, CNN

(CNN) -- A wildlife park in Australia is celebrating the arrival of its first baby koala since bushfires devastated the area.

The baby koala -- known as a joey -- was revealed in a Facebook video posted by the Australian Reptile Park near Sydney, New South Wales, on Tuesday.

"We have a very special announcement... Our very first koala of the season has popped out of Mums pouch to say hello!" reads the caption.

Keepers have named the baby Ash, and the park calls her "a sign of hope for the future of Australia's native wildlife."

The park is all set to reopen on Monday, following Australia's coronavirus lockdown measures, according to another Facebook video.

Keepers have posted a steady stream of videos during quarantine, attracting millions of viewers curious to get to know the animals.

While Ash brings a ray of sunshine to the park, the bushfires that ravaged Australia in the second half of 2019 and into 2020 wrought terrible damage on koala populations.

There is now a significant and immediate threat of extinction to koalas, according to a report published in March.

At least 5,000 koalas are estimated to have died, according to the report from the global conservation group International Fund for Animal Welfare (IFAW).

"Koalas are particularly vulnerable to bushfires as they are slow moving and live in eucalyptus trees that burn quickly and intensely," IFAW Wildlife Campaigner Josey Sharrad told CNN at the time.

"When fires sweep through their homes, they often don't have time to escape, particularly in intense crown fires that rage through the treetops where they live," she added.

However there was good news for koalas at the end of April, when several animals who were injured in bushfires were re-released into the wild.

The marsupials were being treated at the world's only all-koala hospital, located in the New South Wales town of Port Macquarie.

One of the most famous of the group is Anwen, a female whose photos went viral due to the severe nature of her burns -- they covered 90% of her body.