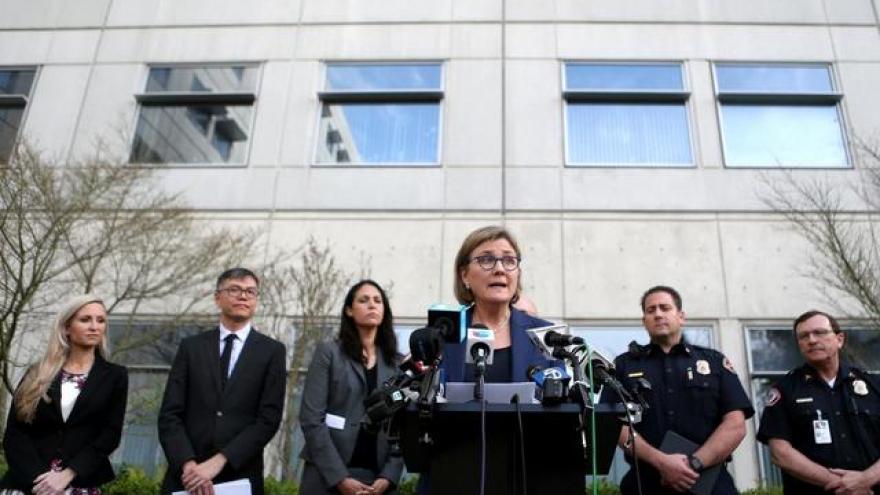 (CNN) -- A patient infected with the novel coronavirus in Washington state has died, a state health official said Saturday, marking the first death due to the virus in the United States.

The patient was a man in his 50s who had underlying health conditions, according to Dr. Jeffrey Duchin, health officer for Seattle and King County, Washington state. President Donald Trump and US officials previously said in a press briefing that the patient was a woman.

"I want to assure that family they are on the hearts of every American," Vice President Mike Pence said.

There was no evidence the patient had close contact with an infected person or a relevant travel history that would have exposed the patient to the virus, Dr. Robert Redfield, director of the US Centers for Disease Control and Prevention, said at the White House Saturday, suggesting the patient became ill through community spread.

Health officials previously said at least 4 US coronavirus patients had no travel history that would tie them to the virus.

While this is the first death in the United States from the coronavirus, it is not the first death of an American. A 60-year-old US citizen died earlier this month in the city of Wuhan, China, where the virus first appeared in late December.

US officials, including the President and Health and Human Services Secretary Alex Azar, urged Americans not to panic.

"It's important to remember," Azar said, "for the vast majority of individuals who contract the novel coronavirus, they will experience mild to moderate symptoms, and their treatment will be to remain at home, treating their symptoms, the way they would a severe cold, or the flu."

At least four US coronavirus patients have no travel history that would tie them to the virus, health officials say.

A woman in Oregon and a high school boy in Washington state are presumptive positives, which means their tests were conducted at local labs, but the results have not yet been confirmed by the CDC.

The other two cases of unknown origin are from California.

An older woman in Santa Clara County who had been hospitalized for a respiratory illness tested positive for the virus but had no relevant travel history or contact with anyone infected, health officials said.

"This new case indicates that there is evidence of community transmission, but the extent is still not clear," said Dr. Sara Cody, director of the county's public health department.

Theother California case is a Solano County woman who is hospitalized at UC Davis Medical Center and in serious condition.

The two counties are about 90 miles apart. The Santa Clara patient had not traveled to Solano County, officials said.

With an increase in cases with unknown origins and a change in testing guidelines across the country, CDC officials said they were hoping to have every state and local health department testing for the virus by the end of next week.

The World Health Organization has "increased our assessment of the risk of spread and the risk of impact of COVID-19 to very high at a global level," Director-General Tedros Adhanom Ghebreyesus said Friday, referring to the WHO's formal name for the disease caused by the virus.

"The continued increase in the number of cases," he said, "and the number of affected countries over the last few days, are clearly of concern."

Oregon Health Authority officials confirmed the state's first presumptive case Friday — a Washington County resident with no history of related travel nor close contact with another confirmed case, the agency said in a news release.

"As such, public health officials are considering it a likely community-transmitted case, meaning that the origin of the infection is unknown," the release said.

Officials said the patient is in isolation.

"We are awaiting confirmation of the test results from the Centers for Disease Control and Prevention, but at this time we are considering this a presumptive case," said state epidemiologist Dean Sidelinger in a statement.

The patient is one of two presumptive positive cases in the state.

A woman from King County tested positive at the state's Public Health Laboratory and is in home isolation, according to a release from the Washington State Health Department. Her test is awaiting confirmation from the CDC.

She visited South Korea for about two weeks earlier this month, according to Dr. Jeff Duchin, health officer at Public Health of Seattle & King County. The woman returned and worked for one day before noticing symptoms. She developed a fever, cough, some nausea, a headache and a sore throat, Duchin said in a news conference Friday. Officials are now investigating the woman's workplace and anyone she may have come in contact with, he said.

In hopes of enabling more rapid testing capabilities, the US Food and Drug Administration announced a policy Saturday allowing certain laboratories to use tests they developed and validated before the FDA has reviewed them.

"We believe this policy strikes the right balance during this public health emergency," FDA Commissioner Dr. Stephen Hahn said in a statement. "We will continue to help to ensure sound science prior to clinical testing and follow-up with the critical independent review from the FDA, while quickly expanding testing capabilities in the US."

The guidance only applies to labs that are certified to perform high-complexity testing. Once labs have validated a test, the guidance says, they must notify he FDA and submit a request for emergency use authorization within 15 business days.

The CDC, following an earlier change in testing guidelines, is working to expand the number of labs that can test for the virus.

Testing kits from the CDC arrived Friday in California, and additional kits are expected soon, according to a news release from the California Department of Public Health.

Some testing kits initially sent to state and local labs were flawed, delaying their ability to test for the virus.

"This has not gone as smoothly as we would have liked," Dr. Nancy Messonnier, director of the CDC's National Center for Immunization and Respiratory Diseases, said Friday.

Guidelines for who should be tested were broadened by the CDC earlier this week after the first case of unknown origin emerged in California.

Initial guidance called for testing only if a patient had a travel history to China or had been in close contact with someone who had been there, CDC Director Dr. Robert Redfield said.

The Solano County patient now in serious condition wasn't initially tested at UC Davis or the Northern California hospital she was transferred from because she did not fit the CDC criteria for testing at the time.

"As soon as that case was recognized, we met and we revised our case definition for persons under investigation," Redfield said.

The guidance was updated on the CDC's website Thursday.

"Today that has been posted along with a new health advisory that the recommendation should be when a clinician or individual suspects coronavirus, then we should be able to get a test for coronavirus."

Correction: A previous version of this story misspelled Washington Gov. Jay Inslee's name. It has been fixed.