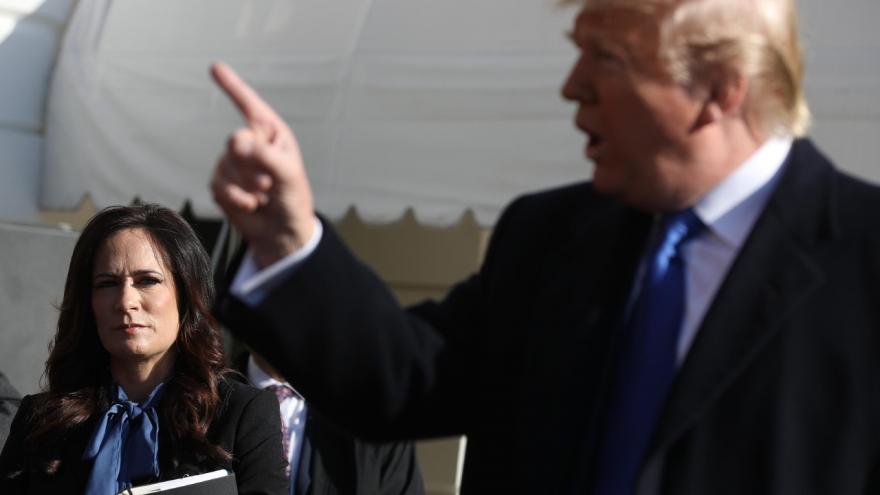 Grisham and Niceta were among the longest-serving Trump administration officials.

Grisham began her tenure working for then-candidate Donald Trump in 2015 as a press wrangler on the campaign trail. She entered the White House as deputy press secretary under Sean Spicer, but in March 2017, Melania Trump hired her for her East Wing staff. As East Wing communications director, Grisham quickly became the first lady's most prominent staffer, acting as defender, enforcer and, often, protector.

"It has been an honor to serve the country in the White House. I am very proud to have been a part of Mrs. Trump's mission to help children everywhere, and proud of the many accomplishments of this Administration," Grisham told CNN in a statement.

The first lady's office did not immediately respond to CNN's request for comment.

Niceta served as the administration's sole social secretary, assuming the post in February 2017. The social secretary conducts and oversees all events at the White House, from small meetings in the West Wing to the annual Easter Egg Roll, Halloween, state visits, and congressional picnics and galas.

Niceta did not immediately respond to CNN's request for comment.

White House press aide Sarah Matthews also resigned Wednesday night, saying in a statement that she was honored to serve in the Trump administration, but "was deeply disturbed by what I saw today."

She added, "Our nation needs a peaceful transfer of power."

President Donald Trump'sinciting and refusal to condemn the violence is causing increased discussion among his aides about resigning. Several top aides -- including national security adviser Robert O'Brien -- are considering resigning, according to multiple sources familiar with their thinking.

While there are only 14 days left in Trump's administration -- and many aides' final days will come before January 20 -- many are disgusted by the President's behavior and no longer believe they can serve him. Whether more join Grisham in resigning remains to be seen, but the level of frustration inside the White House is leading to a growing sense that Trump will be more isolated than ever in his final days in office.

In May 2019, Trump tapped Grisham to be his third press secretary, as well as take on the role of White House communications director, and maintain the same role for the first lady, a trifecta of jobs that had not prior been tasked to one person. Grisham, who replaced Sarah Sanders as press secretary, was in the role for just shy of one year, notably never once holding an on-camera press briefing, which for decades had been standard operating procedure for a White House press secretary.

Grisham eventually clashed with Trump's newly appointed chief of staff Mark Meadows, disagreeing on multiple issues, from communications strategies for the President to staffing decisions, and creating a fissure between the press office and Meadows, according to the official.

In April last year, Grisham was replaced with Kayleigh McEnany as press secretary and returned to the first lady's office in an amplified role, becoming her chief of staff, a position she held until her Wednesday departure. Grisham's decision to resign two weeks before the Trumps make their exit from the White House was precipitated by several months of consternation and struggle, said another senior White House official familiar with her thinking.

The official described Grisham as having a "very close" relationship with the first lady, though Wednesday's resignation was not the first time Grisham had considered leaving her post. The official said Grisham faced a barrage of challenges and what the source described as a "whisper campaign" and "roadblocks" launched by adversaries in the West Wing. Grisham had also in recent months expressed a desire to live closer to family in the Midwest.

This story has been updated with the resignations of White House social secretary Anna Cristina "Rickie" Niceta and press aide Sarah Matthews.