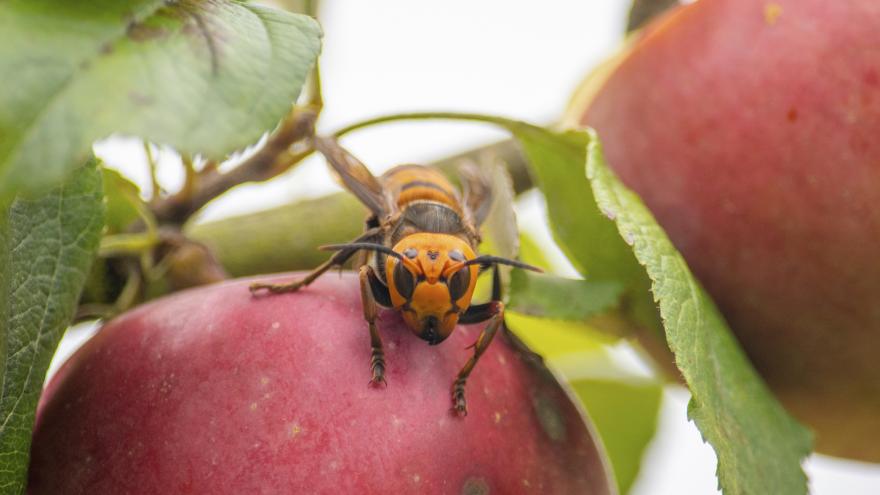 Karla Salp/Washington State Department of Agriculture via AP-An Asian giant hornet with an attached tracking device is shown near Blaine, Washington on October 7, 2020.

(CNN) -- The first nest of giant "murder hornets" ever discovered in the United States has been eliminated, two days after it was located in Washington state.

The Asian giant hornet nest was found on Thursday at 4 p.m. local time by entomologists from the Washington State Department of Agriculture (WSDA) in the cavity of a tree on a property near the town of Blaine.

WSDA staff tracked down the nest through radio trackers which they had attached to several captured hornets. They saw dozens of the insects flying in and out of the tree.

An attempt to eradicate the nest took place on Saturday and "appears to have been successful," the WSDA said in a short statement. "The WSDA Pest Program vacuumed numerous specimens out of the nest," it added

The owner of the property had given the department permission to remove the nest and also the tree if necessary, WSDA said on Friday.

The department will give more information about the removal operation, which was postponed from Friday to Saturday due to "inclement weather," at a press conference on October 26.

Asian giant hornets, which are not native to the US, were first discovered in Washington state in December last year, leading the WSDA to set up a network of traps around the state with the help of citizen scientists. The first hornet was caught in the state in July.

A small group of these hornets, which are the world's biggest, can kill a hive of honey bees "in a matter of hours," according to the WSDA. They usually nest in the ground but can also be found in dead trees.