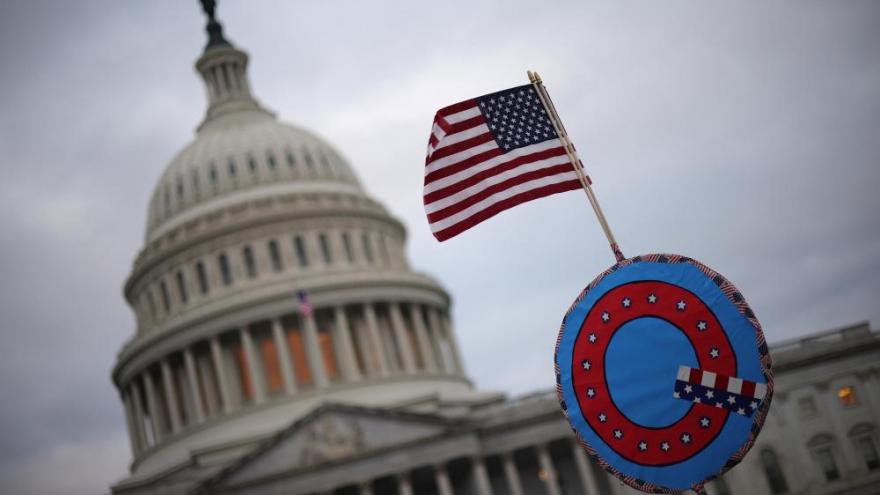 The FBI has warned lawmakers that online QAnon conspiracy theorists may carry out more acts of violence as they move from serving as "digital soldiers" to taking action in the real world following the January 6 US Capitol attack.

(CNN) -- The FBI has warned lawmakers that online QAnon conspiracy theorists may carry out more acts of violence as they move from serving as "digital soldiers" to taking action in the real world following the January 6 US Capitol attack.

The shift is fueled by a belief among some of the conspiracy's more militant followers that they "can no longer 'trust the plan" set forth by its mysterious standard-bearer, known simply as "Q," according an unclassified FBI threat assessment on QAnon sent to lawmakers last week, which was obtained by CNN.

But the report suggests the failure of QAnon predictions to materialize has not led to followers abandoning the conspiracy. Instead, there's a belief that individuals need to take greater control of the direction of the movement than before.

This might lead followers to seek to harm "perceived members of the 'cabal' such as Democrats and other political opposition -- instead of continually awaiting Q's promised actions which have not occurred," according to the assessment.

"Other QAnon adherents likely will disengage from the movement or reduce their involvement in the wake of the administration change," it adds.

Frequently described as a virtual cult, QAnon is a sprawling far-right conspiracy theory that promotes the absurd and false claim that former President Donald Trump has been locked in a battle against a shadowy cabal of Satan-worshipping pedophiles made up of prominent Democratic politicians and liberal celebrities.

Members of the violent pro-Trump mob that stormed the Capitol on January 6 had ties to QAnon, and the conspiracy theory has made its way from online message boards into the political mainstream in recent years.

Titled "Adherence to QAnon Conspiracy Theory by Some Domestic Violent Extremists," the public FBI threat assessment was provided at the request of Democratic New Mexico Sen. Martin Heinrich, who earlier this year revealed that the FBI had provided lawmakers with version of the document in February that was designated "for official use only."

"The participation of some domestic violent extremists (DVE) who are also self-identified QAnon adherents in the violent siege of the US Capitol on 6 January underscores how the current environment likely will continue to act as a catalyst for some to begin accepting the legitimacy of violent action," the unclassified FBI assessment obtained by CNN says.

"The FBI has arrested more than 20 self-identified QAnon adherents who participated in the 6 January violent unlawful entry of the Capitol. These individuals were charged with violent entry and disorderly conduct in a restricted building and obstruction of an official proceeding, according to court documents and press reporting based on court documentation, public statements, and social media posts," it reads.

Heinrich, a member of the Senate Intelligence Committee, along with Senate Majority Leader Chuck Schumer, requested a threat assessment on QAnon in December, one month before the January 6 insurrection. They received a response from the FBI in February Heinrich said during the World Wide Threats hearing earlier this spring before asking FBI Director Christopher Wray why he "cannot or won't tell the American people directly about the threat."

In April, Wray pledged to provide an assessment that could be released to the public. He also acknowledged he remained concerned about potential violence incited by QAnon but despite telling lawmakers that the conspiracy theory is something "we look at very seriously" when it is tied to a criminal act, he made clear the bureau is not investigating the online movement itself.

It was a distinction Wray was careful to highlight while testifying before the House Intelligence Committee, where he was pressed on whether the FBI is investigating elements of QAnon and asked to explain the threat it poses given its connection to the US Capitol attack earlier this year.

But despite characterizing QAnon as an online "movement" that in some instances "may be an inspiration for violent attacks," Wray reiterated that the FBI's investigative efforts regarding the conspiracy theory have been limited to instances where there are links to a federal crime.

"We're not investigating the theory in its own right," Wray told the House panel.

His comments underscored the complex challenge QAnon and other online conspiracy theories pose for the FBI as it investigates the January 6 attack and works with other federal agencies to address the threat of domestic extremism more broadly.