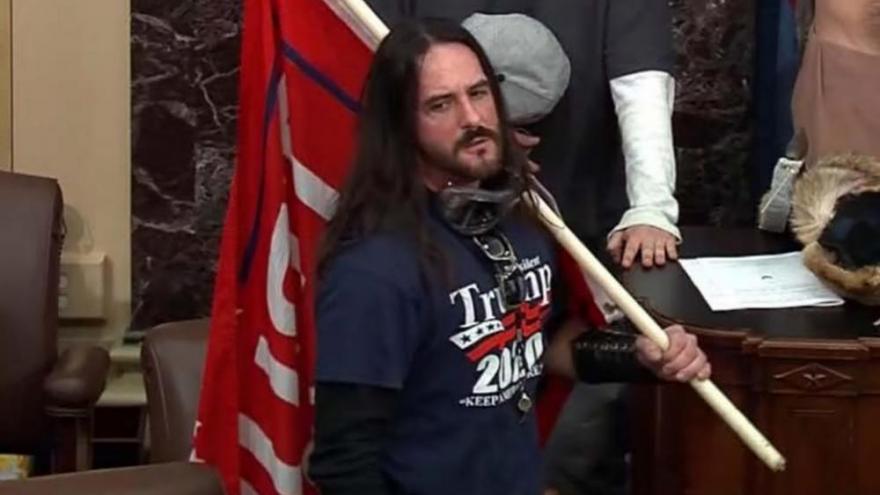 In this CCTV image obtained by the Department of Justice, Paul Hodgkins is seen on January 6 standing near the front of the Senate well. Hodgkins was sentenced July 19 to eight months in prison in a closely watched case.

(CNN) -- A man who pleaded guilty to breaching the Senate chamber during the US Capitol insurrection was sentenced Monday to eight months in prison in a closely watched case that could influence how hundreds of other rioters charged with the same felony are punished.

Paul Hodgkins, a 38-year-old Floridian, is now the first Capitol rioter charged with a felony to be sentenced. He pleaded guilty last month to obstructing congressional proceedings -- specifically, the counting of the electoral votes, which he helped delay by storming the Senate chamber on January 6. He spent about 15 minutes inside, wearing a Donald Trump shirt and carrying a Trump flag.

The sentence is less than the 1.5-year sentence that the Justice Department asked for. Hodgkins was seeking probation.

Federal District Judge Randolph Moss said Hodgkins contributed to a grave offense against democracy but deserved some leniency because he pleaded guilty "exceptionally early" in the process and was not involved in any of the violence on January 6. Still, Moss condemned Hodgkins' actions.

"He was staking a claim on the floor of the United States Senate, not with the American flag but with a flag declaring his loyalty to a single individual over the entire nation," Moss said.

"When a mob is prepared to attack the Capitol to prevent elected officials from both parties from performing their constitutional and statutory duty, democracy is in trouble ... the damage that they caused that day is way beyond the delays that day. It is a damage that will persist in this country for decades."

Moss -- and his reasoning -- could set a benchmark for other Capitol riot cases. Nearly 550 rioters have been charged overall, and the Justice Department says at least 230 of them have been charged with the same obstruction crime to which Hodgkins pleaded guilty.