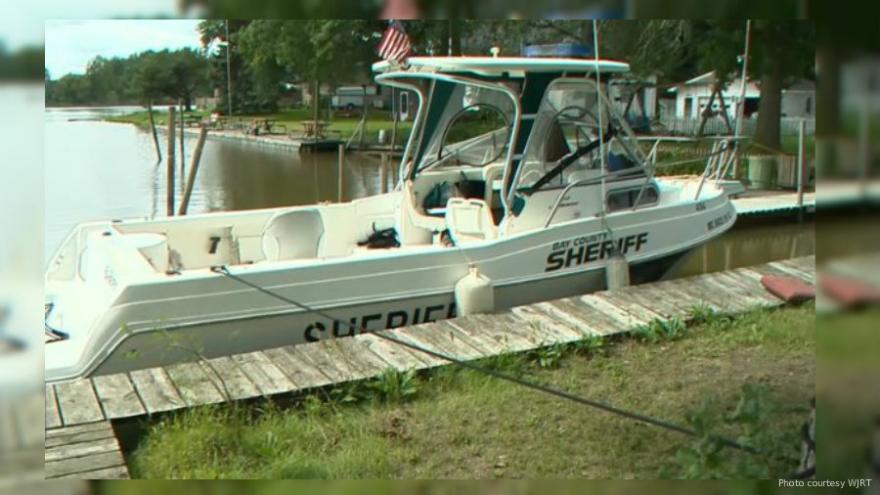 Then around 3 a.m. Thursday he crashed his pontoon into something, likely a buoy, in the Saginaw River near James Clements Airport, south of Bay City.

"His boat started to sink so he left it, swam up to shore, which wasn't a real far swim. He was outside the channel and stayed out there for the night, and apparently may have burned some of his clothes or something to stay warm and said it was very dark and as the sun came and daylight broke, he went back out and swam back out to his boat and was there when the fishermen found him," Cunningham said.

The anglers brought him to shore and called 911. He was taken to McLaren Bay Region to be checked out after receiving bumps and bruises.

When the men found him he didn't have any clothes on.

"I think he may have got in the water and possibly stripped down just so that he could swim or get to shore and wasn't weighed down. Once he got up there I think, just to stay warm, he didn't know what else to do. He said it was real dark and didn't know, you know, he didn't know where he was necessarily," Cunningham said.

The pontoon remained partially submerged as of 2 p.m. Thursday.

Cunningham said when venturing out on Saginaw Bay or the Saginaw River it's important to have the proper safety equipment, including flares and life jackets, and to know your surroundings.

"The river changes rapidly. I mean we've had a couple storms come through, there's a couple dead heads floating out behind us right now. They've just really got to know where they're navigating in the river and be very careful. Make sure they have life jackets and throwable devices and all the stuff," Cunningham said. "And even something like this, be prepared. It might be warm when you go out, but if you end up all night you should have some warmer clothes on board as well."

As investigators looked into what unfolded overnight they decided to have two marine unit boats search the area. Divers were also there. They were making sure no one else was involved in the crash.

After several hours they decided it didn't appear anyone else was involved.

Cunningham said people need to remember the river and bay can be fun, but also dangerous.

"Swimming in the river and stuff, we've had a lot of people that have been lost out in our river and our bay, and I mean, like I say, with our storms and the currents, the way the river is, if you're not real cautious, I mean this could have had a real disastrous ending -- worse than just a loss of property," he said.