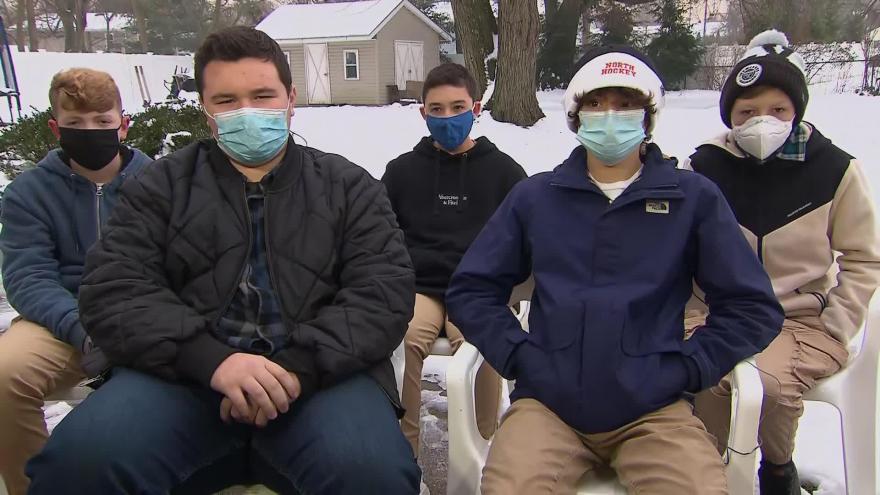 The five boys jumped to action when two children slid into an icy pond in New Jersey.

(CNN) -- Five New Jersey teens are being hailed as heroes after they saved two children from falling into an icy pond while they were sledding.

The group of high school freshmen, Tyler Armagan, Ryan Day, Joseph Dietrich, Kieran Foley and Drew Scalice, were getting ready to head home Thursday from sledding at the Beacon Hill Country Club in Middletown. Then they heard a commotion and realized the two small children were headed straight into a pond at the bottom of a hill.

Kieran, 14, told CNN's "New Day" that the two siblings, 8-year-old Olivia Heid and her little brother, 4-year-old R.J., were sledding down the hill and their dad was yelling at them to jump off the sled.

"They just went so fast right down the hill," Kieran said, adding because the two were facing backwards, "they really didn't see it coming."

The boys, all members of the same Boy Scout troop, quickly went into action to get the two children out. Kieran was into the water first and the boys formed a human chain to get them out quickly.

"I knew it wasn't that deep, the water, so I just picked them up and brought them to the side of the pond to get them as warm as possible," Kieran said.

The boys split up to get them out of the water and then consoled them as they waited.

"All I can remember is seeing the kids come down," Drew said. "When we went to the car they started to cry ... but Ryan was trying to calm the kids down, asking them what they wanted for Christmas, all that type of stuff."

The parents of the rescued children, Richard Heid and Stephanie Irlbeck, sent CNN a video thanking the young men for "their courage and bravery" and the kids gave them a hearty "thank you."

"I'm grateful that it's a good, positive impact on everyone's life and the kids were safe and no one got hurt," Kieran said.