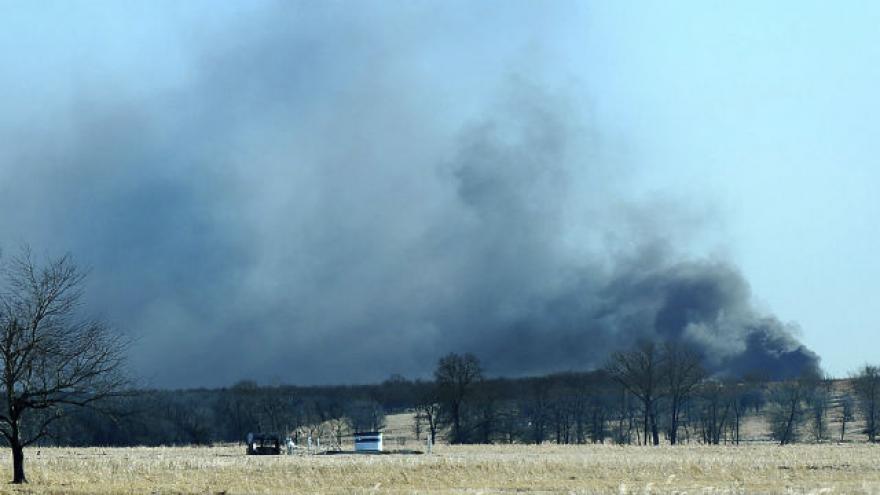 The remains of five oil rig workers were found Tuesday after an explosion that rocked an Oklahoma gas well a day before, authorities said. Photo courtesy Harvison/The McAlester News-Capital/AP

(CNN) -- The remains of five oil rig workers were found Tuesday after an explosion that rocked an Oklahoma gas well a day before, authorities said.

"All five of the missing workers have been located," Pittsburg County Sheriff Chris Morris said at a press conference. "The remains will be transported back to the medical examiner's office for identification, and we will continue to secure the site and the scene until the investigation is complete."

On Monday morning, workers reportedly heard an explosion, followed by a blaze that quickly consumed the rig site in a rural area about 100 miles south of Tulsa.

"From what I was told from many of the survivors, there was an explosion. They heard a loud boom, they saw fire and they ran," said Morris. "Everyone was trying to survive... There was one guy that was very high (on the rig). They grabbed a hold of a guideline and slid down the guideline which would have been scary in itself, but he survived."

Seventeen employees escaped the blaze with minor to no injuries. One of them was flown by medical helicopter to a hospital in Tulsa, officials said.

The five victims were too close to the source of the fire to escape, Morris said.

"The bodies were located in the area that they were presumed to be working in -- what they call the 'dog house,'" he said. "It was so hot in that area, that would have been where the fire initially started. Once it cooled off and that area was stabilized by the oil field company, the medical examiner was on scene -- they got in there and found them."

The names of the victims were listed as:

The recovery operation was initially hindered by the hot temperatures in the immediate rig area, authorities said. Search crews had to wait for the rig to cool off and for the oilfield companies to stabilize the site. Over two dozen agencies were involved in the response effort.

The cause for the explosion is unclear at this time, authorities said.

The Occupational Safety and Health Administration (OSHA) has opened a federal investigation into the incident, according to Morris.

The new well is owned by Red Mountain Operating, according to a spokesman for the Oklahoma Corporation Commission, the state's regulatory agency for oil and gas. The well was drilled by Patterson-UTI Energy, said Enloe. It is unclear if crews were drilling for oil or natural gas.

"At this moment, we are focused on the difficult days ahead," Red Mountain Operating President Tony Say said in a statement. "Our priority is the people who have been affected, and the safety of those who will be called upon to work the well site and investigate."

Patterson-UTI released a statement on Monday saying it was "deeply saddened" by the incident.

"Our hearts go out to the families of the five missing individuals, three of whom are Patterson-UTI employees," the statement said. "We've reached out to their families and are providing support during this difficult time. At this moment, no one knows with certainty what happened and it would be unwise to speculate."