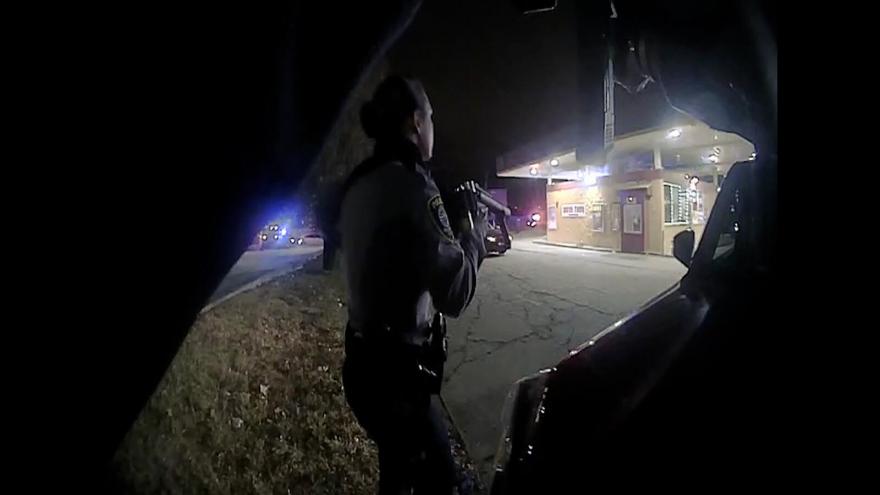 Five Oklahoma City police officers are charged with first-degree manslaughter in the shooting death of a 15-year-old in November. Bodycam footage shortly before police fired shots at Stavian Rodriguez in Oklahoma City.

(CNN) -- Five Oklahoma City police officers were charged with first-degree manslaughter in relation to the shooting death of a 15-year-old in November, according to court records filed Wednesday in Oklahoma County.

In an email sent to CNN, Dan Stewart of the Oklahoma City Police Department said that the department was informed on Tuesday that the officers would be charged.

According to the Oklahoma City Police Department incident report, officers were responding to an armed robbery call at a gas station on November 23. The report says that the store clerk fled the store during the robbery and locked the suspect inside.

Once officers arrived, they surrounded the gas station and ordered the suspect, Stavian Rodriguez, to come out. He climbed out of the drive-thru window, the report says.

Surveillance footage released by the district attorney shows Rodriguez stepping out of the window and pulling a gun out of his waistband as officers were yelling for him to show them his hands and drop the gun. He appears to be putting his hand down on his left side, and officers opened fire on him seconds later.

Bodycam footage from five of the officers provided to CNN by the police department did not show the actual shooting, but officers can be heard yelling for Rodriguez to show them his hands. It's unclear in the videos who fired the first shots but multiple shots can be heard.

The incident report states that Rodriguez "did not follow officers' commands and was subsequently shot." He died after he was transported to the OU Medical Center, the report states.

Police records show that all five officers fired at Rodriguez. Another officer at the scene fired a less lethal round, they say, and was not charged in the incident. The five officers involved have been on administrative leave since November, the report says.

"A loss of life is always a tragedy, and we know these officers did not take firing their weapons lightly," John George, president of the Oklahoma City Fraternal Order of Police, said in a statement. "The OKC FOP stands by these officers and maintains they acted within the law."

Attorneys have not been listed for the officers as of Wednesday. Currently, there are no dates set for the case.