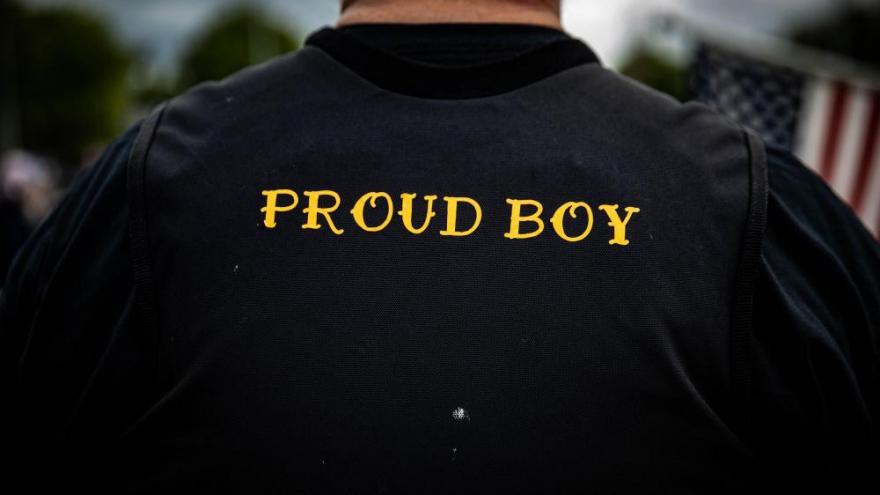 The Justice Department unsealed conspiracy charges against five people associated with the Proud Boys, in the latest and largest move against the far-right group's coordinated role in the insurrection last month.

(CNN) -- The Justice Department unsealed conspiracy charges against five people associated with the Proud Boys on Thursday in the latest and largest move against the far-right group's coordinated role in the insurrection last month.

In a criminal complaint, an FBI agent described how the group "moved closely to each other" inside the Capitol on January 6 and wore pieces of fluorescent orange tape affixed to their clothing or gear.

Some are accused of leading crowds of rioters as they pushed through multiple police lines and made their way through the Capitol grounds. They all wore tactical-style gear, including helmets and gloves. One had a wooden club or ax handle that was initially disguised as a flag.

Authorities arrested the men and women in an early morning sweep Thursday. William Chrestman, Louis Enrique Colon and Christopher Kuehne were taken into custody near Kansas City, Missouri, and Cory and Felicia Konold, brother and sister, were arrested in Arizona, according to the Justice Department.

All but Chrestman are charged in a joint conspiracy filing -- the greatest charge of organized activity by number to come out of the massive federal investigation -- underscoring authorities' focus on the Proud Boys, several of whom have already been charged in recent weeks. Chrestman is charged separately with conspiracy but grouped together with the others by an FBI agent in an affidavit.

The conspiracy charges are likely to grow. In a footnote in the affidavit, the FBI agent said they believe more people may be involved in the conspiracy and that an investigation is ongoing.

The Proud Boys, known for their aggressive men's-rights philosophy and clashes with Antifa, have become a central target for prosecutors in Washington as they piece together the extent of coordinated activity at the Capitol. Some high-profile members of the group have been arrested over the past month and investigators have built out charges related to their fundraising efforts ahead of the insurrection.

Throughout their presentation in the Senate, the managers cited the role of noted Proud Boys in the violence and tried to connect them to Trump, who had refused to condemn them during the 2020 campaign.

The five people arrested Thursday are not described explicitly as members of the group, but their affiliations are laid out in detail.

In a video that authorities believe was posted to Felicia Konold's Snapchat account, a female speaker celebrates that she had just been "recruited into a f***ing chapter from Kansas City" and shows off a challenge coin with apparent Proud Boys markings.

On January 6, the five are seen in a video marching toward the Capitol in a group that was led by two Proud Boys organizers, according to the complaint.

In another video from that day, Chrestman and Felicia Konold parade down Washington's famed Constitution Avenue in a group with the two organizers shouting "Whose streets? Our streets," the complaint says.

The FBI agent also notes that Kuehne carried rolls of the orange tape that was "strategically worn by each of the subjects as well as others in the crowd."

"Based on my training and experience, your affiant believes the use of orange tape by multiple members in the crowd was a mark that was intended to identify persons for a particular purpose. The intent and purpose of this identifying tape remains under investigation," the agent wrote.

Inside the building, surveillance video shows the group moving in close proximity and signaling "to coordinate their efforts."

Four of the five are seen thwarting the descent of metal barriers that police had tried to lower in an attempt to seal off areas within the Capitol.

In pictures included in the court documents, Felicia Konold is seen holding one of the barriers up with her hand. Kuehne appeared to place a podium in the tracks of another barrier, the complaint says.