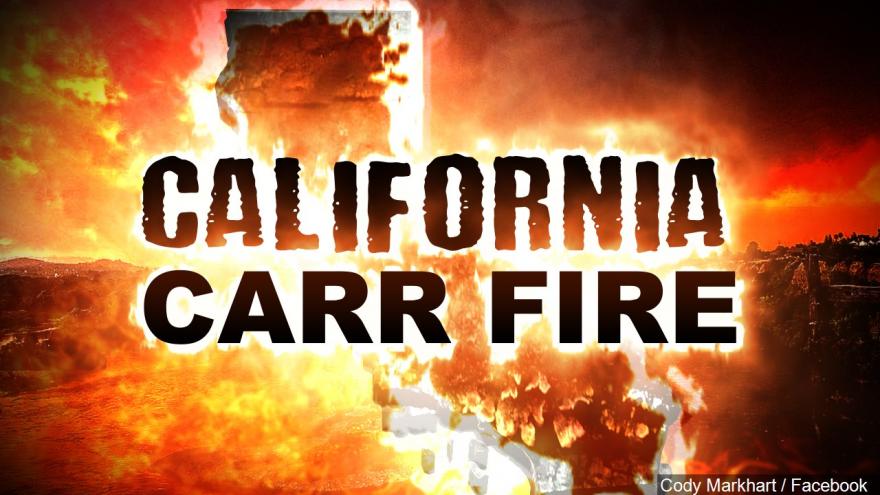 REDDING, Calif. (CNN) -- It happens countless times on roads across America: a vehicle gets a flat tire, usually just a temporary inconvenience.

But on one road near Redding, California, when a tire failed last month on a trailer and its rim scraped the asphalt, the result proved to be catastrophic for an entire region.

The sparks that shot out July 23 from that minor incident, California fire officials said, ignited what is now the sixth-most destructive wildfire in state history.

The Carr Fire blazed a fiery path along Highway 299, lighting up mile after mile of dry brush as it crept up on residential areas.

The blazed turned everything it touched into ash, mangled metal and black embers, and is still burning nearly two weeks later. It's killed six people, scorched nearly 134,000 acres -- an area larger than Denver -- and created its own weather system.

It caught residents by surprise

Ed Bledsoe lost his wife and their two great-grandchildren in the fire, all within 15 minutes.

The Shasta County resident had left home to see a doctor, unaware of the fire's erratic movement. At the time, it had burned for three days, but away from his neighborhood.

While he was out, his wife, Melody Bledsoe, 70, called and told him the fire was getting closer to their home. She begged him to come get her and their great-grandchildren: Emily Roberts, 4, and James Roberts, 5.

James took the phone and pleaded with his great-grandfather to hurry up and save them.

He dropped everything and rushed home. But the roads were congested and the heat and flames so intense, the area near his house was cordoned off. His wife and the two children were among the six people killed in the Carr Fire.

"I tried to call them back and it just went to nothing," Bledsoe said as he wept. "Poor babies and my wife."

The winds caused a tornado of fire

The day Bledsoe's family died, the winds were so strong in Redding, they uprooted trees, ripped off roofs and downed power lines. Experts described it as a "firenado," when a fire's intense heat causes the air to heat up and rise rapidly. That, combined with strong winds, creates a vortex similar to a dust devil that pulls fires in different directions.

Redding resident Dominic Galvin said he and his wife did not think the fire would get that big so fast, and scrambled to get out at the last minute.

"When we saw the fire on the ridge ... once we saw it there we knew it was coming, but it was too late then," he said.

His wife, Sylvia Castaneda, broke down in tears as she recounted their loss.

"I had a lot of photos from my childhood, from life, and everything is gone. It seems like part of my life is gone. There's nothing -- just ashes."

Firefighter David Spliethof was doing his job as a spotter pilot, flying over the fiery chaos to assess damage and flag trouble. As he flew over his neighborhood this week, he realized his home had burned to ashes, too.

He took a picture of the charred debris where his house once stood and continued fighting the blaze, at times working 24-hour shifts with some of the more than 4,300 people fighting the Carr Fire.

"I don't feel that I did anything special," he said of continuing to work despite losing his home. "Once I saw my house gone ... there's going to be plenty of time to go back through the remains and see what we can salvage."

Other firefighters lost their lives while trying to save others.

Of the six people killed in the Carr Fire, two were firefighters: Jeremy Stoke, who was helping evacuate people, and an unidentified bulldozer operator killed while fighting the flames.

To show their appreciation to firefighters and emergency personnel, Northern California communities are offering them food, water, even free haircuts. Some have posted handwritten signs all over the city. "Best first responders ever! Our heroes," one sign read.

"We wanted to show our gratitude for fighting to save our city," said Redding resident Nichole Grubbs-Miller, who posted some of the signs.

All that's left of some neighborhoods are piles of ash, concrete and charred cars. Preetha Reddy said her street in Redding looks like a war zone.

"There's nothing left. It looks like a bomb hit it," she said. Residents are not allowed to enter, and the destruction seems surreal.

"If they'd only let us in and have it sink in," Reddy said.

Fire officials said some areas in Shasta County remain under evacuation orders because shifting winds and steep terrain are creating hazardous conditions. The weather this weekend will not provide much relief for the firefighters in Redding, with temperatures forecast to be in the mid-90s and wind gusts of up to 30 mph, CNN meteorologist Robert Shackelford said.

Firefighter Rick Johnson said the humidity and triple-digit temperatures are difficult enough without adding the heat from the fire. The blaze is so large and hot, it is creating its own localized weather system with strong winds, making it difficult to predict which way it will spread.

Carr is one of 11 big fires in the state

The Carr Fire has burned about 1,500 structures to the ground and is the largest of 11 major wildfires racing through California and stretching state resources. California has already spent a quarter of its firefighting budget for the year just in July.

Firefighters are struggling to stop the blazes, with the Carr Fire 39% contained by late Friday night.

Fire officials have issued a grim prediction, warning that massive blazes will cost the state billions of dollars over the next decade.