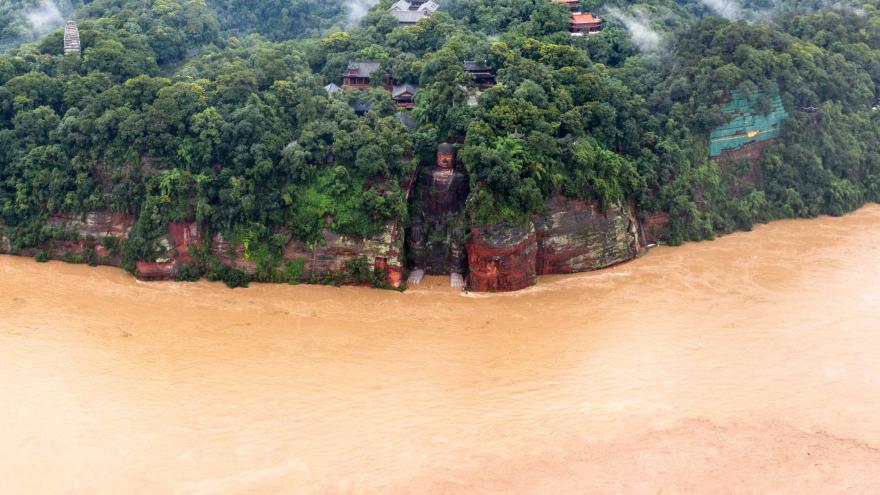 Originally Published: 19 AUG 20 08:10 ET
By Rob Picheta, CNN
(CNN) -- Floods in southern China have caused water from the Yangtze River to reach the toes of a famous gigantic statue of the Buddha -- reportedly for the first time in decades.

Flooding has engulfed much of the region this year, and the latest round forced local officials to raise the risk level and evacuate residents around the river's upper reaches.

It also caused water to touch the toes of Leshan's Giant Buddha, which state-run media outlet Xinhua reported has not happened in at least seven decades.

The 233-foot-high sitting Buddha was carved out of a hillside on Mount Emei around 1,200 years ago, and forms part of a UNESCO world heritage site in China's Sichuan province.

It usually sits comfortably above the waters of the Yangtze, and tourists gather at its base.

But the area was closed to visitors on Monday in response to the rising waters. Officials hope it will re-open later this week after safety assessments are carried out, they wrote on Chinese social network Weibo.

Summer flooding is not uncommon in the region, but recent months have brought particular difficulties.

The broader Yangtze River basin — which includes Poyang Lake and stretches more than 3,900 miles from Shanghai in the east to the Tibetan border in the west — accounts for 70% of the country's rice production.