Florence 'SeeSee' Rigney, said to be America's oldest working nurse, retires at the age of 96 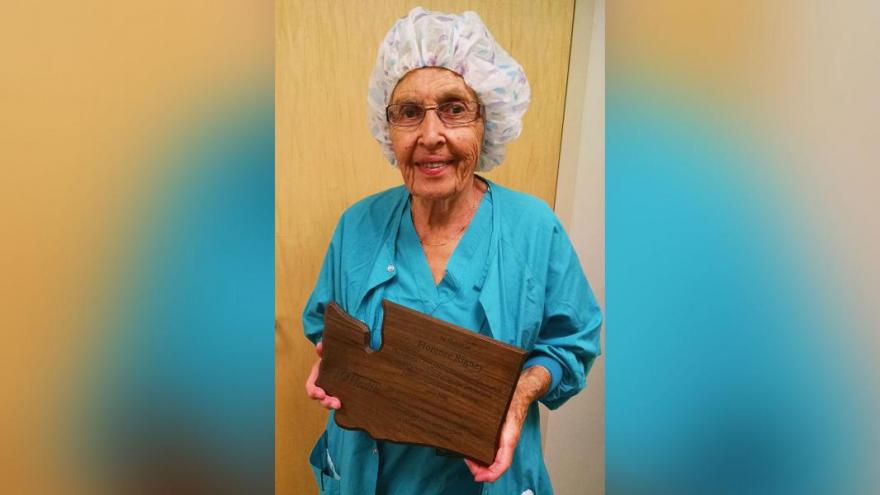 Florence 'SeeSee' Rigney is seen after receiving an award.

(CNN) -- For over seven decades, Florence "SeeSee" Rigney, a nurse in Washington, has been taking care of patients and assisting doctors. Last week, at 96 years old, she officially hung up her scrubs and retired.

Rigney, a beloved member of the MultiCare Tacoma General Hospital, served as an operation room nurse where she was responsible for setting up operating rooms to the specifications of surgeons and prepping patients for surgery, according to the hospital's press release announcing her retirement. She also served as a relief nurse when needed.

"Even working into her nineties, SeeSee has never been one to slow down," said Laureen Driscoll, president of MultiCare Tacoma General and Allenmore Hospitals, in a statement. "Some of her colleagues joked that they had to sprint to keep up with her."

Rigney's career in nursing started when penicillin had just been introduced to the medical field, according to the press release. She graduated from Tacoma General School of Nursing in Washington. She worked across the US, in Texas and Wyoming, before returning to Tacoma.

"She's continued to be a dedicated nurse and an incredible resource to her colleagues and community," said Driscoll. "It's humbling to stop and think about the thousands and thousands of lives she's cared for."

This isn't the first time Rigney turned in her retirement papers. When she was 65, she briefly retired from nursing for six months. But she couldn't stay away from her passion to help others and returned to Tacoma General, where she eventually transitioned to working part-time, according to the hospital.

"I don't like to sit around -- I've always got to have something to do. That's my nature," said Rigney in the press release. "I don't know exactly what made me want to become a nurse, but it was something that I always wanted to do. I love to interact with patients and give them the help that I can."

While her last day at the hospital was on July 16, her legacy will continue on to inspire future generations. MultiCare Health System announced they have establishing the "SeeSee Rigney Nursing Endowed Scholarship Fund."

The fund will provide scholarships to MultiCare nurses for continued learning and development and for MultiCare employees who would like to pursue a career in nursing, reads the press release.

"Everyone at MultiCare thanks SeeSee for her unmatched dedication and service, and we're proud to honor her by supporting tomorrow's future nurses," said Driscoll.

Rigney, a mother of two, said she is looking forward to spending more time with her family and friends in her retirement.