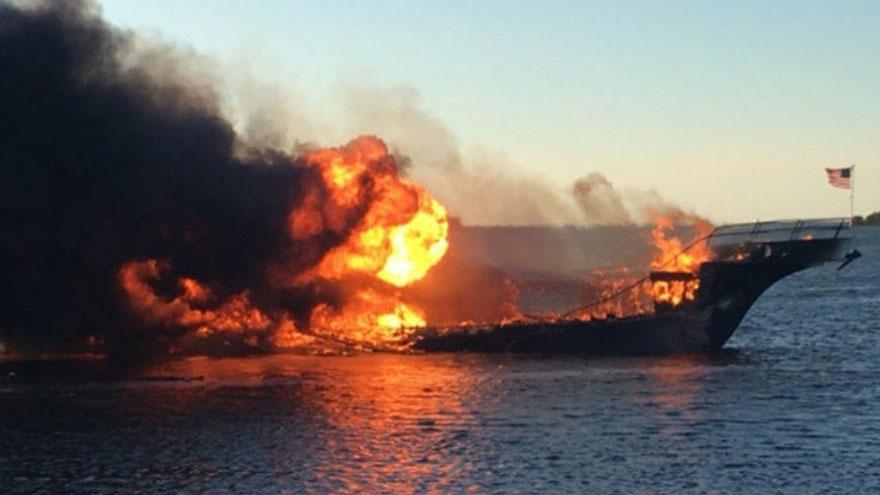 (CNN) -- A woman died and 15 people were injured when a fire broke out on a shuttle boat taking passengers to a casino boat near New Port Richey, Florida, north of Tampa.

The female passenger, 42, died at 10:42 pm on Sunday at the Bayonet Point Regional Medical Center where she was being treated for her injuries, according to Kevin Doll, Pasco County Sheriff's Office spokesman.

The extent of her injuries or the cause of death were not released.

There were 50 people on board when the fire started Sunday about half a mile from shore, said Shawn Whited, the chief of the fire division for Pasco County. Fire department officials said the fire likely started in the engine room and spread quickly.

Officials said the boat's captain saved lives because he turned the boat around when he noticed the flames, managing to get closer to shore and making it easier for first responders to reach those in the water.

Officer Jason Zimmerman of the New Port Richey Police Department said some of the older passengers were face down in the water when he reached them.

"If we didn't show up at the time we did, there were going to be serious consequences," Zimmerman said.

The 59-degree water combined with Gulf breezes created a risk of hypothermia for the passengers, emergency officials said.

"They were absolutely frigid when they got out of there," Fossa said.

The first 911 call about the fire came in around 4:15 p.m., CNN affiliate WFTS reported. The boat was still burning about two hours later.

The fire broke out near waterfront homes, and passengers who jumped out and swam to shore ended up in backyards, a witness, who gave her name only as Hala, told WFTS.

One man shot video of the burning boat as it neared the shore.

"We called 911 as soon as possible and we thought we were witnessing a tragedy happen. It was really hard to watch but we were glad they were close to shore and our whole neighborhood came together to pass blankets and whatever care they needed," Bakr Jandali of Port Richey told CNN. "The boat went from smoke to full flames very quickly as seen from the video."

Jandali said his entire neighborhood jumped into action to help the passengers, including a neighbor who offered his garage as shelter for the passengers.

"Our front door neighbor Larry opened his garage for all of them to come in and that was a huge help," Jandali said. "He offered blankets and other things as well as the other neighbors. The whole neighborhood [was] communicating and going back to our houses to get whatever they need like water or clothes like socks."