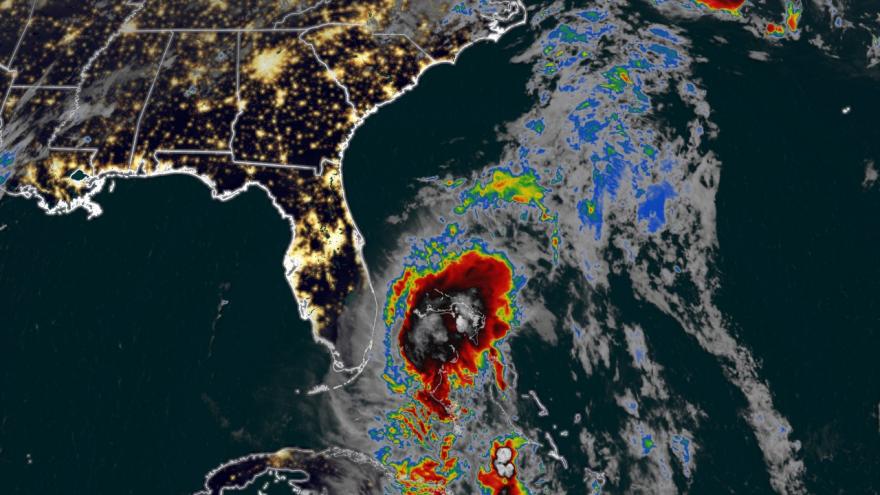 Originally Published: 02 AUG 20 05:22 ET
By Christina Maxouris and Joe Sutton, CNN
(CNN) -- Florida is now beginning to feel the first effects of a powerful storm system that is inching slowly in the state's direction.

Tropical Storm Isaias now has maximum sustained winds of 65 mph. A Hurricane Warning along the east coast of Florida has been replaced with a Tropical Storm Warning that's been extended northward along the coast to South Santee River, South Carolina.

A Storm Surge Watch is also in effect from Edisto Beach, South Carolina, north to Cape Fear, North Carolina, while a storm surge of up to four feet is expected along portions of Florida's east coast Sunday.

Forecasts show the storm making landfall between Charleston, South Carolina, and Myrtle Beach Monday overnight before continuing on to the Northeast, CNN meteorologist Rob Shackelford said. The storm is likely to strengthen throughout the day Sunday, he said.

Isaias is threatening Florida with violent winds capable of damaging roofs and buildings Sunday and destroying some mobile homes, according to the National Weather Service in Miami.

The storm will also dump up to six inches of water over parts of the state. As it treks along the coast, Northeast Florida and coastal Georgia will see up to three inches of rain.

"Heavy rainfall from Isaias could result in potentially life-threatening flash flooding in the Bahamas and flash and urban flooding along the East Coast of the United States," according to the National Hurricane Center and Central Pacific Hurricane Center.

By the time the storm moves further north Tuesday, southeast New York and parts of New England could see up to six inches of rain, according to the center.

The system already drenched the Bahamas after crossing over Andros Island as a hurricane Saturday morning, leaving in its wake downed trees and power outages.

"(Florida Power and Light) has nearly 10,000 workers deployed and ready to respond, including more than 6,500 line and vegetation personnel," Gov. Ron DeSantis said.

In parts of the southern coast of the state, some isolated tornadoes could peel off roofs and snap off branches, the weather service said.

In preparation for the storm, North Carolina and Virginia declared states of emergency, allowing officials to move resources and equipment for recovery. And in Florida, the governor issued a state of emergency for several counties and encouraged all parts of the state to accept evacuees so as not to overcrowd local shelters.

North Carolina Gov. Roy Cooper authorized up to 150 members of the state's National Guard to be used if needed in hurricane response, a news release from the governor's office said. The storm's center could affect the state early Tuesday.

"We all need to be prepared for the dangers that Isaias could bring," Cooper said in a statement.

"As we learned with Hurricane Florence, even a category one storm can bring severe impacts, and we should not take this lightly."

In South Carolina, where the governor hasn't ordered an emergency declaration, some local governments are gearing up for what the storm could bring.

The City of Myrtle Beach issued a Civil Emergency Declaration on Friday. North Myrtle Beach also declared a state of emergency Friday. In Charleston, officials said the city began reserving pumps to position in low-lying areas in the case of flooding.

In Virginia, the governor issued a state of emergency and said high winds and flooding will likely impact parts of the state.

"This state of emergency will ensure localities and communities have the assistance they need to protect the safety of Virginians, particularly as we continue to deal with the Covid-19 crisis," the governor said in a statement. "I encourage Virginians to take all necessary precautions, monitor local weather forecasts, and stay alert."