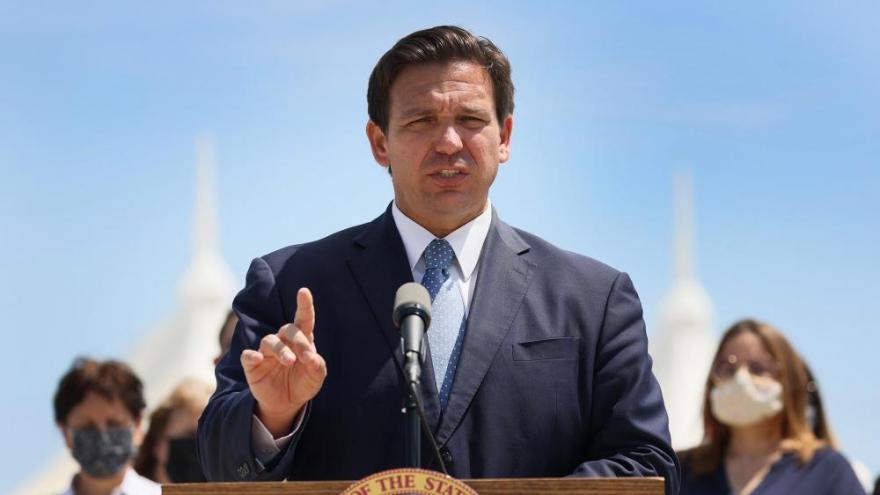 Florida Gov. Ron DeSantis on May 6 signed into law a controversial voting bill aimed at curbing access to mail-in voting in the state.

(CNN) -- Florida Republican Gov. Ron DeSantis on Thursday morning signed into law a controversial voting bill aimed at curbing access to mail-in voting in the state, joining a host of other GOP-led states pushing new limits in connection with former President Donald Trump's baseless claims of fraud in the 2020 election.

In signing the bill during an appearance on "Fox & Friends," the Florida Republican highlighted provisions of the bill including stricter voter ID requirements for voting by mail, creating limits on who can pick up and return a voter's ballot, and banning private funding for elections.

"Me signing this bill says: Florida, your vote counts, your vote is going to be cast with integrity and transparency and this is a great place for democracy," DeSantis said after signing the bill.

Local media outlets told CNN that they were not allowed to go inside the morning signing event and that it was a Fox News exclusive.

Some of the restrictions created by the bill, Senate Bill 90, also include expanding partisan observation power during ballot tabulation and creating additional restrictions for drop box use.

A coalition that includes the League of Women Voters of Florida and the Black Voters Matter Fund announced it had filed a lawsuit within minutes of DeSantis signing the law. It challenges several provisions, including its new restrictions on ballot drop boxes and the prohibition on organizations and volunteers returning ballots on behalf of voters.

A separate lawsuit filed Thursday morning by Common Cause, Florida branches of the NAACP and a disabilities rights group describes the new law as "the latest in a long line of voter suppression laws targeting Florida's Black voters, Latino voters, and voters with disabilities."

Last week, after days of contentious debate and last-minute amendments bouncing between chambers, the Florida Republican-controlled state House and Senate came to an agreement and approved SB90 along party-line votes on the eve of the state's final day of the legislative session.

The bill is part of a Republican-led effort nationwide to restrict voting access at the state level in the wake of record turnout in last November's elections. A tally by the left-leaning Brennan Center for Justice at New York University found that 361 bills with provisions that restrict voting had been introduced in 47 states as of March 24.

In the past month, the effort to restrict voting has intensified as state legislatures begin to head into the final months of their respective sessions.

Democrats frequently mentioned the continued public fallout from Georgia's recent election overhaul bill during debate on the Florida measure, which they called a "revival of Jim Crow in this state."

"That bill that was passed in the state just north of us sent us a message, and the response to that bill should let us know we should not be doing this," Democratic state Rep. Michael Grieco said during House debate, pleading, "Please do not Georgia my Florida."

Florida Republicans, who have repeatedly acknowledged that their state ran a successful and secure 2020 election, said the bill would provide "guardrails" to prevent anyone from "gaming the system" in the future.

"We've had voter ID. It works. It's the right thing to do," DeSantis said on Fox News last week, adding that the state's 2020 election was "fair and transparent, and the reforms we have coming will make it even better."

DeSantis' signature comes as former President Trump continues to cement his hold on the Republican Party.

On Monday, Wyoming Rep. Liz Cheney, the No. 3 House Republican, publicly rejected Trump's most recent false charge that he would've won the 2020 election if not for "fraudulent" votes, her latest rebuke of the former president that has put her at odds with many members of her own party.

"The 2020 presidential election was not stolen," Cheney tweeted on Monday. "Anyone who claims it was is spreading THE BIG LIE, turning their back on the rule of law, and poisoning our democratic system."

Cheney is now facing backlash from her fellow Republicans and is expected to be removed from her leadership position.