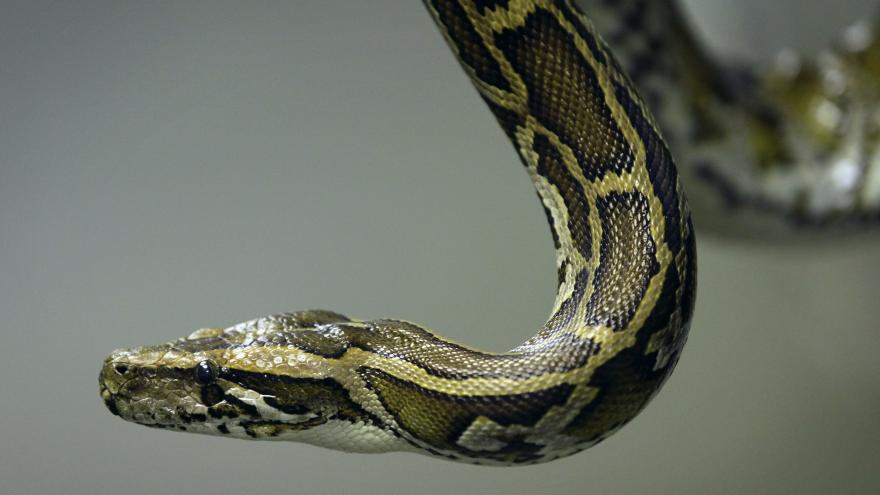 (CNN) -- No, this is not an announcement about a new reality show on TLC.

The South Florida Water Management District really is looking for a few dozen civic-minded people to join its python elimination program. The program works exactly like you think it would: Authorized citizens, known as python removal agents, are paid by the hour to track and humanely dispatch pythons and other invasive, environmentally dangerous snake species. There are bonuses to be had as well: The program pays extra for snakes measuring more than four feet or for snakes that were sent to the afterlife while guarding snake eggs.

The program was started in 2017 to curb the area's non-native Burmese python population, and while it's unfortunate the big ol' nope ropes are being marked for death, they're known to do more harm than good in the area.

Florida's Fish and Wildlife Conservation Commission describes the Burmese python, native to Asia, as "an invasive species which negatively impacts native wildlife in and around the Everglades ecosystem in south Florida."

If it helps ease your conscience, pythons are typically six to 10 feet long and -- this is a direct quote from Florida Fish and Wildlife -- "are capable of climbing."

Since the Python Elimination Program began, more than 2,500 pythons have been sent to the great beyond under its authorization. In fact, it's proved so effective the SFWMD is petitioning to add $750,000 to the program's funding.

CNN has reached out to the SFWMD by phone for additional comment and is waiting to hear back.

"We're going to be asking for 50 paid hunters," program director Mike Kirkland told the Fort Myers News-Press. "It's been a tremendous success, the most successful program in the history of the issue by a wide margin in terms of snakes caught and cost effectiveness."

In order to be considered, you must be at least 18, have all of your IDs and documentation in order, and have no recent criminal history. Removal agents use a GPS tracking app to log their time spent hunting and tracking the creatures on public land. The South Florida Water Management District's website has more information about the program, including a very Florida answer to a very Florida question:

Can firearms be used to remove pythons?