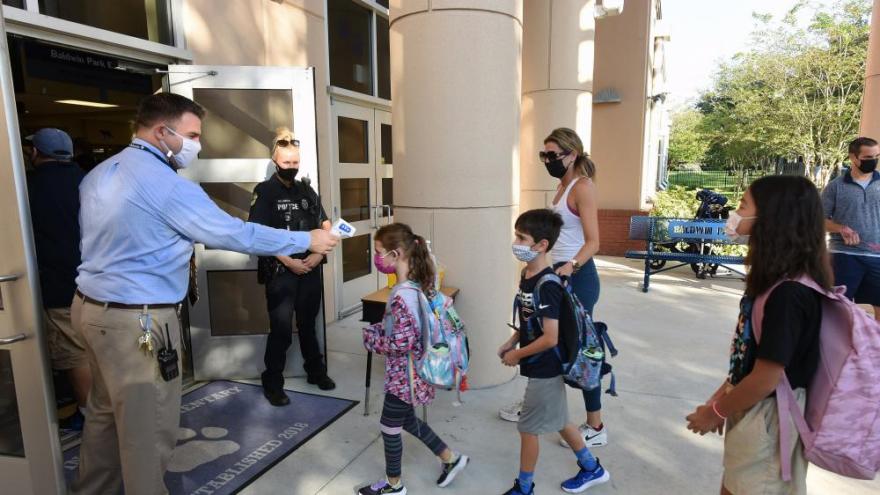 A Florida judge on Wednesday allowed schools in the state to mandate face masks while the case is appealed. Students here arrive on the first day of classes for the 2021-22 school year at Baldwin Park Elementary School.

(CNN) -- A Florida judge ruled against Gov. Ron Desantis on Wednesday and allowed schools in the state to mandate face-masks while the case is appealed at a higher level.

The ruling from Second Circuit Judge John Cooper, effective immediately, means the state of Florida must stop enforcement of banning mask mandates -- which ends sanctions against several school districts that have implemented such mandates.

The decision comes amid heated showdowns between the state and some local school districts, which have insisted on requiring students to wear masks amid a surge in Covid-19 infections.

Even so, 13 Florida school districts have now implemented a mask mandate without a parent opt out in defiance of the governor's position.

Judge Cooper ruled against DeSantis' order two weeks ago, saying the governor overreached and did not have the authority to ban school districts from implementing mask mandates without a parent opt out.

DeSantis appealed that ruling, which led to an immediate pause on school mask mandates while a ruling was made.

That pause has now been lifted. In Wednesday's ruling, Judge Cooper said there was not enough irreparable harm to set aside the automatic stay triggered by the appeal.

"It's undisputed that in Florida we are in the midst of a Covid pandemic. Based on the evidence I've heard, there's no harm to the state if the stay is set aside," Cooper said.

Cooper added that based on expert witnesses it is clear the only way to protect children who are unable to be vaccinated is to keep children isolated at home, which would cause additional harm.

"In particular for children under 12, they cannot be vaccinated. Therefore, there's really only one or two means to protect them against the virus ... either stay at home, or mask."

Cooper added that based on the evidence young students "arguably have no way to avoid this, except to stay home and isolate themselves."

"I think everybody agrees, that's not good for them," Cooper said.

The case will now go to the First District Court of Appeal.

"They'll thoroughly consider the arguments of all parties, and they'll make a decision, then it may or may not end up at the Florida Supreme Court," Cooper said.

Prior to Cooper's ruling, Gov. DeSantis said he was "very confident" he will ultimately win the court battle over his statewide ban on mask mandates.

"What we have found is, you know, in the trial courts in Tallahassee, state and federal, we typically lose if there is a political component to it. But then in the appeals court, we almost always win," DeSantis said when asked about Wednesday's hearing. "And so I don't think (the judge) is going to lift the stay ... but if it is lifted I am confident that that will be reinstated at the 11th Circuit."

DeSantis spoke from Palm Coast at an event promoting monoclonal antibody treatments as a method of preventing severe illness and death resulting from a Covid-19 infection.