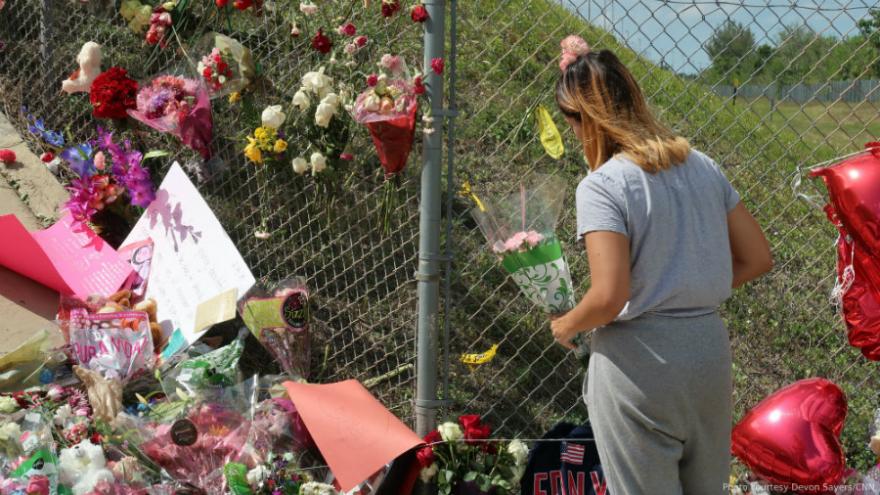 (CNN) -- Florida lawmakers are considering a series of proposals in response to the mass shooting at Marjory Stoneman Douglas High School that triggered an outcry for accountability and reform.

With the last day of the state's legislative session set for March 9, the clock is ticking for lawmakers amid pressure from young survivors of the shooting, who gathered in Tallahassee on Monday. The state House Appropriations Committee passed a stripped-down gun control bill, but the meatier Senate bill is scheduled to be taken up by the Senate Appropriations Committee later Tuesday.

As Florida and federal lawmakers debated various measures Tuesday, a law enforcement official briefed on the investigation into the Parkland massacre told CNN the gunman had 180 rounds of ammunition remaining and could have exacted a deadlier toll at the school. The official also said the shooter had swastikas etched into his rifle magazines and, at one point, attempted to break a hurricane-proof window, to no avail.

The news will surely only strengthen the calls for tougher gun laws issued by hundreds of Floridians, including Marjory Stoneman Douglas students, who converged on the state Capitol on Monday in an event called "Rally in Tally."

"My generation is saying, 'Will I survive another day? Will I be shot in a movie theater or a concert?'" said Houston Barenholtz, 18. "We're supposed to be protecting these places and now we're getting shot at."

Participants had listed a permanent ban on assault-style rifles as one of their aims, but that prospect was dashed when the provision was removed from bills being considered by House and Senate subcommittees.

After the Senate subcommittee session Monday, disappointed demonstrators in orange shirts who are pushing for gun safety pointed their fingers at the lawmakers and chanted "shame" and "vote them out."

The Florida Democratic Party slammed the Monday vote, saying it was "a shame that Gov. [Rick] Scott and Tallahassee Republicans continue to do the bidding of the gun lobby, instead of listening to the chorus of voices asking for common sense gun legislation."

The Senate subcommittee rejected the proposal, which was an amendment to Senate Bill 7022. The bill, which lets law enforcement seize firearms from people under certain conditions, advanced without the amendment.

Two more proposals advanced in Florida's Capitol on Monday. They are SB 7026, which relates to active shooter policies, including the creation of a voluntary program that provides "firearm safety and proficiency training for selected faculty and staff strategically focused on providing security" in attacks.

On Tuesday, Parkland parents were in Tallahassee to talk to lawmakers and advocate for gun safety measures.

At least five Parkland-related bills are being debated before the Florida House and Senate appropriations committees on Tuesday.

Andrew Pollack, whose daughter, Meadow, was shot nine times at Marjory Stoneman Douglas High School, said he didn't want anyone to feel the pain he felt after losing Meadow in the school massacre.

"In Florida, we have the chance to stop it," he said. "Every state in the country is watching to see what we will do."

Randi Weisselberg, whose 15-year-old daughter survived the shooting, added in tears, "The entire world is standing up and begging you to fix this problem."

In the House committee, a proposal allowing teachers the option to arm themselves failed, as did an amendment to ban assault weapons and to require mental health background checks for those licensed to carry a weapon.

A ban on the sale and possession of bump stocks -- the devices employed by the Las Vegas concert shooter to make his semiautomatic weapons fire more like fully automatic weapons -- did pass the committee, however. That bill will head to the House floor, and the Senate committee will discuss a similar bill Tuesday afternoon.

Scott is also scheduled to be in Doral later Tuesday to announce a plan that will devote $500 million to school safety and mental health programs.

In Washington, the push for new regulation and significantly strengthened background checks appeared to lose political momentum as lawmakers filtered back to the Senate and the House.

President Donald Trump is set to meet with lawmakers Wednesday, the White House said, t Though sources close to the discussions said it appears he is backing away from his call to increase the age limit to 21 for some weapons, White House press secretary Sarah Sanders said, "The President still supports raising the age limit to the age of 21 for the purchase of certain firearms."

Sanders said she expected the issue to arise during Trump's meetings with lawmakers.

Commissioners voted to ask the county attorney to explore possible gun measures they could enact, to hire an independent agency to investigate the shooting and to create a task force to review the actions of agencies that responded to the shooting.

They also passed a resolution urging state and federal lawmakers to pass gun control measures, including restricting the sale of ammunition and gun modifiers, to ban assault weapons, to limit the number of firearms a person can own and institute a universal background check. They also asked state lawmakers to provide funding to tear down and rebuild classrooms, and to create a memorial, at Marjory Stoneman Douglas.

The building where the shooting happened will remain closed as students return to campus this week.

Robert Runcie, superintendent of Broward County Public Schools, told CNN there is no date for razing the building.

"It will need to be coordinated with the State Attorney's Office as it is a crime scene and may be used in legal proceedings," he said.

Classes are scheduled to resume at Stoneman Douglas on Wednesday. At first, the school will only have half-day sessions.

Teachers returned to campus Monday and are back Tuesday for a planning day.

History teacher Greg Pittman told CNN that teachers are stressed about being able to do the right things for their students.

"I think the best thing that all of us as teachers can do is be ourselves, to let our students know we're there for them, that we love and care for them."

Meanwhile, three victims who were injured in the shooting remain hospitalized in fair condition as of Tuesday morning, according to Broward Health Systems.