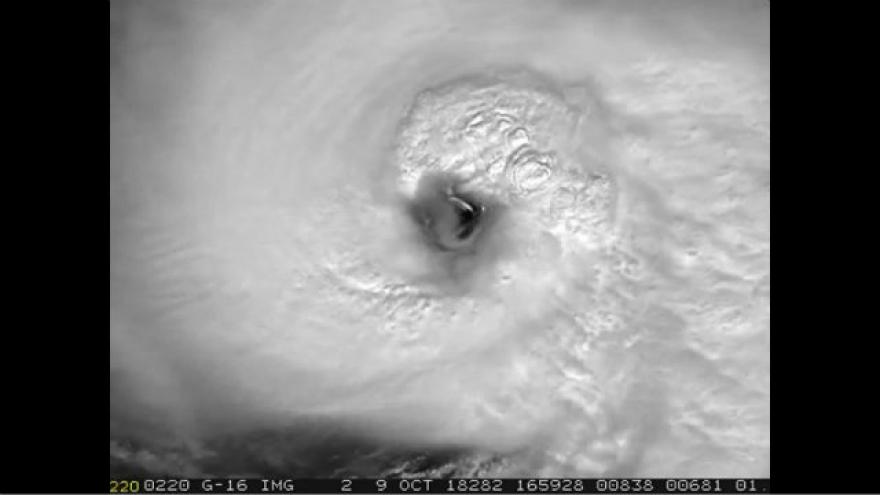 TALLAHASSEE, Fla. (AP) — Michael roared down on the Florida Panhandle strengthening into a Category 4 hurricane early Wednesday before it crashes against the region's white-sand beaches, fishing villages and coastal communities later in the day.

The unexpected brute that quickly sprang from a weekend tropical depression grew swiftly, rising in days to a catastrophic storm. Around midday it was expected to become one of the Panhandle's worst hurricanes in memory with heavy rainfall expected along the northeastern Gulf Coast and life-threatening storm surge of up to 13 feet (4 meters).

Florida officials said roughly 375,000 people up and down the Gulf Coast had been urged or ordered to evacuate. Evacuations spanned 22 counties from the Florida Panhandle into north central Florida. But fears lingered that some failed to heed the calls to get out of Michael's way as the hard-charging storm began speeding north over the warm waters of the Gulf of Mexico.

Worried meteorologists said it had the potential of becoming one of the worst storms in the history of Florida's Panhandle. 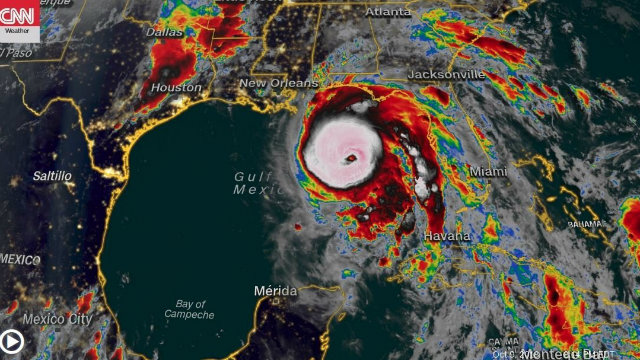 Satellite view of Hurricane Michael on Tuesday as of 8:14pm ET. CNN Weather

"I guess it's the worst case scenario. I don't think anyone would have experienced this in the Panhandle," meteorologist Ryan Maue of weathermodels.com told The Associated Press. "This is going to have structure damaging winds along the coast and hurricane force winds inland."

University of Georgia's Marshall Shepherd, a former president of the American Meteorological Society, called it a "life-altering event" on Facebook and said he watched the storm's growth on satellite images with a pit growing in his stomach.

Franklin County Sheriff A.J. Smith near the vulnerable coast said his deputies had gone door to door in some places urging people to evacuate. "We have done everything we can as far as getting the word out," Smith said. "Hopefully more people will leave."

On the exposed coast of Florida's Big Bend, most of the waterfront homes in Keaton Beach stood vacant amid fears of a life-threatening storm surge in an area that hadn't seen a potentially catastrophic major hurricane in decades. Even so, 77-year-old resident Robert Sadousky wasn't quite ready to evacuate yet.

The retired mill worker has spent more than half his life on the coast and weathered his share of storms. He chose the spot where his house stands on tall stilts overlooking the Gulf waters in 1972 after it was the only lot left dry after a storm flooded the beach that year.

While most homes around him are vacation rentals or summer getaways for their owners, Sadousky had stayed put through more than four decades of storms. No longer. Michael was expected to bring surging seas up 9 feet (2.75 meters) above ground level at Keaton Beach.

"I know it's going to cover everything around here," Sadousky said Tuesday, eyeing water lapping at the edge of a canal behind his home. He pulled two small boat docks from the water, packed his pickup and picked some beans from his garden before getting out — like hundreds of thousands elsewhere.

At 2:00 a.m. Wednesday, the eye of Michael was about 180 miles (289 kilometers) south-southwest of Panama City, Florida. It also was about 170 miles (273 kilometers) southwest of Apalachicola, Florida. Hurricane-force winds extend outward up to 45 miles (72 kilometers) from the center and tropical-storm-force winds extend outward up to 175 miles (281 kilometers). Some additional strengthening is possible today before Michael makes landfall in the Florida Panhandle or the Florida Big Bend area. Weakening is expected after the storm makes landfall.

"We don't know if it's going to wipe out our house or not," Jason McDonald, of Panama City, said as he and his wife drove north to safety into Alabama with their two children, ages 5 and 7. "We want to get them out of the way."

Florida Gov. Rick Scott warned it was a "monstrous hurricane," and his Democratic opponent for the Senate, Sen. Bill Nelson, said a "wall of water" could cause destruction along the Panhandle.

"Don't think that you can ride this out if you're in a low-lying area," Nelson said on CNN.

But some officials were worried by what they weren't seeing — a rush of evacuees.

"I am not seeing the level of traffic on the roadways that I would expect when we've called for the evacuation of 75 percent of this county," Bay County Sheriff Tommy Ford said.

In the dangerously exposed coastal town of Apalachicola, population 2,500, Sally Crown planned to go home and hunker down with her two dogs.

"We've been through this before," she said. "This might be really bad and serious. But in my experience, it's always blown way out of proportion."

Mandatory evacuation orders went into effect in Panama City Beach and other low-lying areas in the storm's path. That included Pensacola Beach but not in Pensacola itself, a city of about 54,000.

Michael could dump up to a foot (30 centimeters) of rain over some Panhandle communities before its remnants go back out to sea by way of the mid-Atlantic states over the next few days. Forecasters said it also could bring 3 to 6 inches of rain to Georgia, the Carolinas and Virginia, triggering flash flooding in a corner of the country still recovering from Florence. And isolated tornadoes were also possible.