Floridians rejoice as malls, barbershops and gyms reopen across the state 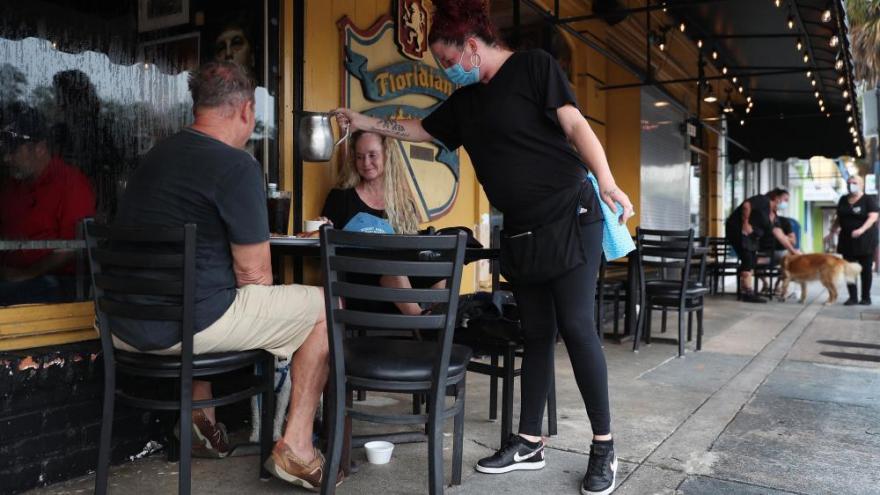 (CNN) -- Folks in the Sunshine State were eager to finally work out, eat out and go to the mall Monday as phase one of Florida's reopening plan went into full effect.

Restaurants, malls, libraries and gyms were able to open at 50% capacity. Barbershops were also able to reopen as long as they abided by safety protocols like wearing face masks and social distancing.

It's the first time many of these establishments are reopening since Gov. Ron DeSantis implemented the state's stay-at-home orders in March.

While localities such as Miami-Dade County reopened, some of south Florida's most iconic locations have not. The cities of Miami and Miami Beach -- with its famous Ocean Drive -- are still shut down.

"We are trying to go as slow and as careful as possible because we recognize that in a hospitality town like ours -- we are a crowd-based economy -- we typically want people to gather in large groups but we really can't have that right now," said Miami Beach Mayor Dan Gelber.

Barbershops reopen to flood of appointments

It's been two months since Manny Merchant got a hair cut and he said his hair was starting to look like a "disgrace."

So when he heard that The Spot Barbershop in Downtown Doral, near Miami International Airport, was reopening Monday, he didn't hesitate to go. He was skeptical, though.

Mike Risco, CEO of The Spot, opened at 8 a.m. and told CNN he was expecting to stay open until midnight.

"Our main concern is making sure our customers feel comfortable when they come in," Risco said.

The Spot Barbershop closed two months ago. There are several changes with the reopening, including social distancing and a requirement that all customers wear a mask during a haircut. The mask can be removed during a beard treatment, in which case the barber wears a face shield.

There are no walk-ins allowed at the shop, and only clients with an appointment are seen.

Merchant's skepticism subsided once he got to the barbershop, and he said the new policies reassured him that he'd be OK.

"I was glad to everyone wearing masks and gloves," he said.

Brian Griffis said he couldn't wait to get back to working Monday at Any Time Fitness in Jacksonville.

"It's like taking a two-and-a-half-month vacation without any gym, and then trying to regroup and reconnect this morning," Griffis told CNN affiliate WJXT-TV. "It's just phenomenal to be here."

Haley Ward told WJXT she was excited to be back at Any Time Fitness, too.

"I'm going to run, work off the alcohol that I've been drinking for the whole of nine weeks. It's embarrassing," Ward said. "I've gained so much weight. So I'm just going to run the whole time."

Chad Cahoy, owner of Jacksonville Strength and Athletics, opened for the first time Monday, according to WJXT.

"This is starting from scratch and a brand-new facility," Cahoy said. "I was trying to get my gym open about a week prior to the pandemic, and all the gyms (were) getting shut down, so this is my startup."

His gym focuses on Olympic weightlifting and strength training.

"Pretty much any gym that I've ever worked at, we have very high cleanliness standards," Cahoy said. "But now we're going to have to make sure that is done in between every single class -- just a little bit more work, but not a big deal."

The popular Floridian Restaurant in Fort Lauderdale has been closed for two months and employees were excited about its reopening Monday, according to CNN affiliate WPLG-TV.

The owner and staff members have made changes to how they operate.

"We took half of our seating out. You know, we're 100 seats down. You see nothing on the table -- no silverware, everything's got to be done hands-on. It's a whole new education. It's like starting a new restaurant," said owner Butch Samp.

At Sawgrass Mills, the largest mall in Broward County, cars were in the parking lot and people were waiting outside for the doors to open at 11 a.m., according to CNN affiliate WPLG-TV.

Social distancing guidelines were in effect, with markings on the floor to direct foot traffic, WPLG reported, and shoppers were being offered masks at the entrances.

Ana-Marie Codina Barlick, a developer and the CEO of Codina Partners, helped businesses in the Downtown Doral development reopen Monday.

"We have been preparing since the whole crisis began. We started first by supporting the businesses with their take-out efforts and helping promote all of that," Barlick said. "We are making sure our restaurants are following a pretty consistent approach to the guidelines so that we can inform our customers that if they come to Downtown Doral they are going to have a seamless, safe, clean experience."