Flu season soars in the United States, especially in the South 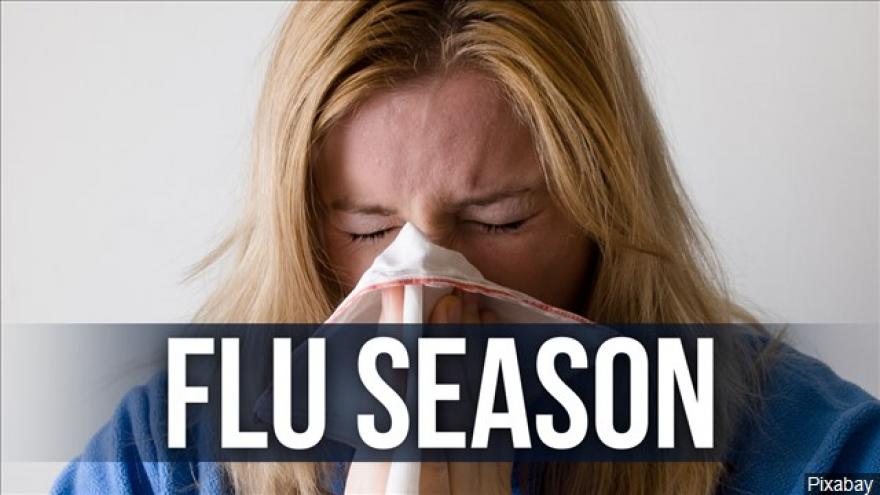 Flu is a contagious, viral illness that causes mild to severe symptoms that, in rare cases, can lead to death. Five children have died, and an additional 566 flu-related hospitalizations have occurred as of November 25. Photo courtesy Pixabay

(CNN) -- After a slow start in October, flu season in the United States is gaining speed, particularly in the South.

Flu activity, which has been increasing since the start of November, is now higher than usual for this time of year, according to a report published Thursday by the Centers for Disease Control and Prevention.

Flu is a contagious, viral illness that causes mild to severe symptoms that, in rare cases, can lead to death. Five children have died, and an additional 566 flu-related hospitalizations have occurred as of November 25.

"Flu is increasing. We're seeing a pretty steep increase in influenza activity across the US but especially in the South," said Brendan Flannery, a co-author of the new report and an epidemiologist in the CDC's flu division.

"We recommend that for everyone 6 months and older, if you haven't received your vaccine yet, now is the time to get it," said Shannon Stokley, an associate director for science in the immunization services division at the CDC.

Despite this guidance, fewer than half of Americans have received a jab this season. Common concerns focus on efficacy of the vaccine and side effects.

"Among the general population, about 39% have received the vaccine," said Stokley, co-author of a new CDC report that canvased people by phone and internet in early November.

Experts believe the flu virus is spread when a sick person talks, sneezes or coughs. Common symptoms include cough, sore throat, runny or stuffy nose, fever and chills, muscle and body aches, headaches and fatigue. Most people recover in less than two weeks.

However, as Dr. Tanya Altmann, a pediatrician and spokeswoman for the American Academy of Pediatrics, pointed out, the flu has potentially serious complications such as pneumonia, bronchitis and sinus and ear infections.

"Anything that you can do to help prevent your family from getting the flu is very beneficial," said Altmann, who was not involved in the CDC research. Her advice includes the CDC recommendation to get a flu shot, but she also adheres to low-tech techniques of contagious disease prevention: "good hand-washing techniques, teaching kids not to share their germs, staying home when you're sick and disinfecting common surfaces," she said.

Infants and pregnant women, particularly those in the second and third trimesters, are most vulnerable to developing complications, according to the CDC.

"We have some evidence that the vaccination protects the woman from influenza herself, and it can protect the infant in the six months of life from getting influenza before we are able to vaccinate the infant," Flannery said. Both the CDC and the American College of Obstetricians and Gynecologists recommend flu shots for all women who are or will be pregnant during the flu season.

Many mothers-to-be, though, have not heeded this advice.

Are pregnant women getting 'appropriate' care?

Only one-third of pregnant women have received a flu shot, even though the overwhelming majority of them visited a health care provider at least once, according to another new CDC analysis of data gathered from an internet survey conducted during the first week of November.

More than a quarter of pregnant women reported that medical staff did not recommend or offer a flu shot.

"It makes me a little sad that people across the country -- especially pregnant women -- may not be getting the recommended and appropriate health care," Altmann said.

Coverage was highest for pregnant women whose doctors recommended and offered the vaccine: Just over half of women in this category had received a shot.

Side effects and vaccine efficacy

The CDC -- which lists sore or swollen arms, hoarseness, sore eyes, cough, fever and aches among the most common side effects -- notes that these effects "are usually mild and go away on their own." Extremely rare severe allergic reactions can also occur, according to the CDC.

Among health care workers who declined the vaccine, the most common reason is fear of experiencing side effects or getting sick from the vaccine.

Not everyone agrees that the flu shot is one of the best ways to protect families and prevent serious complications, including Dr. Erika Schwartz, an internist and founder of a medical practice in New York City that focuses on wellness and disease prevention.

Schwartz, who was not involved in the CDC reports, said some of her patients take the flu shot, but others do not.

"Everybody's risk is different," Schwartz said. Flannery said highest-risk patients are the elderly, pregnant women and infants, and people who have underlying conditions, such as lung or heart conditions.

And the vaccine is no guarantee of protection. Last year's flu vaccine effectiveness was just 42%, the CDC estimated this year, while preliminary estimates published in the New England Journal of Medicine suggest that this year's vaccine may be just 10% effective.

Flannery explained that the journal article looked at Australia's most recent flu season and highlights the low vaccine effectiveness against one type of influenza: the H3N2 strain predominating in the US today. The article's authors also noted that "the vaccine prevented about a third of all illness by all of the types of flu," Flannery said. "There's still some protection against all flu illness in Australia last season.

"We do see a predominance of the H3N2 virus that was common last season," Flannery said. "H3N2 seasons have been more severe in terms of hospitalization and death, especially in the elderly and young children; that's a concern."

Dr. William Schaffner, an infectious disease specialist at Vanderbilt University, said that vaccine effectiveness is not a simple measure.

"When we measure vaccine effectiveness, that's effectiveness against protecting against disease completely," said Schaffner, who was not involved in the CDC research, though he is a liaison representative of the Advisory Committee on Immunization Practices, which develops recommendations on the use of vaccines for the CDC.

"What's not measured is that, even if you get the flu in spite of the vaccine, your flu case is likely to be milder; you're less likely to have the complications of pneumonia, having to be hospitalized and dying," he said.