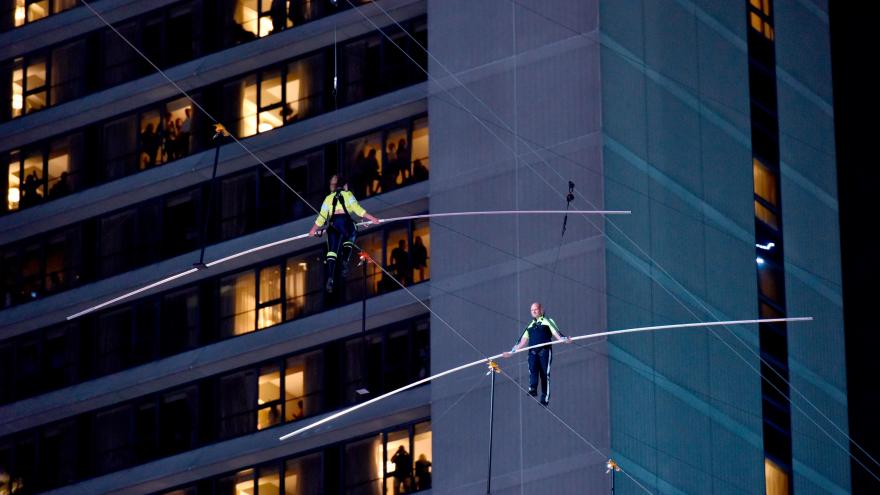 (CNN) -- The Flying Wallendas astonished the world once again, becoming the first to cross New York's Times Square on a tightrope 25 stories above the city streets.

A huge crowd at the iconic New York square was pulling for famed daredevil Nik Wallenda and his sister Lijana as they made the nerve-racking 1,300 foot crossing between 1 Times Square and 2 Times Square.

Nik started first from 2 Times Square at 9:20 p.m. Lijana started about a minute later at 1 Times Square. The two slowly made their way toward the other, chatting with each other, Lijana singing at times, and talking to their father via a communications system as the world listened in a live ABC broadcast.

"This has been my life, longer than I've been alive," Nik said at one point during the wire walk.

The breathtaking feat was Lijana's first time performing since she was seriously injured in a 2017 fall, when she and four others fell 30 feet from a tightrope during a rehearsal.

About 17 dramatic minutes in, the two met. Lijana then sat down on the wire, and Nik crossed over her. After a few tense moments when Lijana realized she had rehooked her pole wrong, they went on to finish at the opposite end from where they started.

For Nik, it was the fulfillment of a lifelong dream of "paying homage" to his family's performance at Madison Square Garden in 1928, he told ABC.

Before the performance, Lijana said she was really nervous because it's so high up.

Nik and Lijana are the seventh generation of the Great Wallendas. Their great-grandfather, Karl Wallenda, brought the family to America from Germany to perform for The Ringling Brothers and Barnum & Bailey Circus, according to ABC. Karl Wallenda was killed at the age of 73, attempting to walk between two buildings in Puerto Rico in 1978.