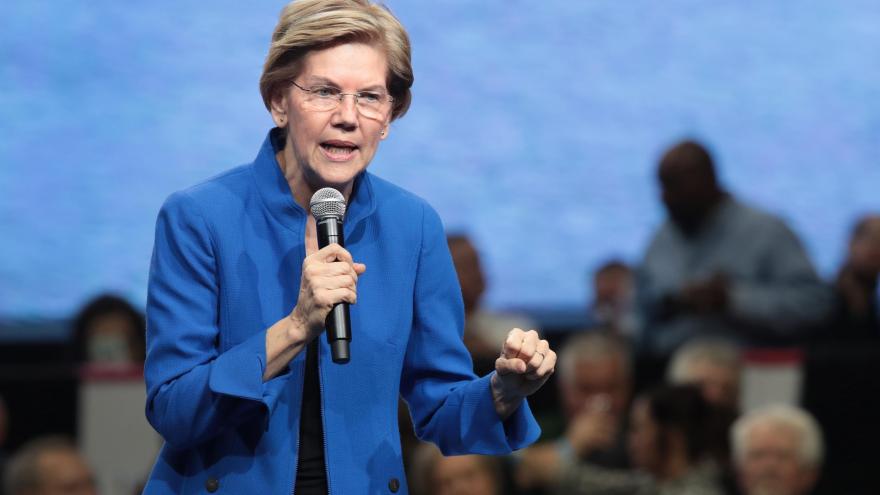 If she's elected president, the Massachusetts senator would provide free health care for everyone. She would wipe out student loan debt for tens of millions of people and give free child care to millions of kids. She would increase Social Security benefits by $200 a month and invest heavily in clean energy technology.

These big ideas -- along with others the 2020 Democratic candidate has announced -- come with an equally big price tag: More than $30 trillion over 10 years.

If enacted, her proposals would balloon federal spendingby more than 50% over a decade -- on top of the nearly $58 trillion already projected by the Congressional Budget Office. To pay for it, Warren would increase taxes on the wealthy, corporations and Wall Street, while expecting employers and states to chip in too.

"She's got a very, very ambitious -- you might almost call it a muscular -- program of what government should do," said William Gale, senior fellow in economic studies at the Brookings Institution. "It's firmly based on the ideathat some problems lend themselves to government solutions better than others do. It's a no-apologies approach to policy."

Warren and her 2020 Democratic rival Sen. Bernie Sanders are proposing a major expansion of government involvement in Americans' lives as a way to boost the middle and working classes. They stand in contrast to former Vice President Joe Biden and South Bend, Indiana, Mayor Pete Buttigieg, whose plans call for a more moderate broadening of federal spending.

In addition to her spending proposals, Warren also wants to wield the government's power to help consumersand smaller businesses. Her "Accountable Capitalism" plan would require very large corporations to consider the interests of all stakeholders, not just shareholders, and she would mandate that workers at big companies elect no less than 40% of board members. Warren also wants to use federal power to break up large industries -- such as Big Tech and Big Ag -- and increase oversight on Wall Street.

"It's not about big government or small government," said Bharat Ramamurti, the campaign's deputy policy director for economic policy. "It's about who government works for."

Warren's vision harkens back to the major social programs of earlier eras. President Franklin D. Roosevelt launched a series of federal initiatives, known as the New Deal, in the 1930s to stabilize the nation and help it recover from the Great Depression. Some efforts, such as the Works Progress Administration, which provided jobs for the unemployed, were short term. But others, including Social Security, unemployment insurance and federal agricultural subsidies, still exist.

Roughly three decades after the New Deal, President Lyndon B. Johnson spearheaded the Great Society, which wove the government even deeper into the nation's social fabric. It created Medicare and Medicaid, as well as Head Start and other anti-poverty, environmental and consumer protection initiatives.

Warren continues in this tradition, taking the view that government involvement can be beneficial, said Julian Zelizer, history professor at Princeton University and CNN contributor. What's more, he said, one of her central issues is that America's free market philosophy has left the middle class struggling-- which is why government needs to step in to provide crucial services.

"She wants to make the argument that's why we need a different path right now," Zelizer said.

The largest of Warren's proposals is her "Medicare for All" plan, which would create a national health insurance system that would cover everyone at no cost. But it would increase federal spending by $20.5 trillion over a decade, which she plans to cover mainly by requiring contributions from employers and by raising taxes on the wealthy, corporations and Wall Street. She says she'd aim to implement the program, the brainchild of Sanders, by the end of her first term.

Warren also wants to invest $2 trillion in researching, developing and manufacturing clean energy technology to slash greenhouse gas emissions by 2030. Warren would spend another $1 trillion on additional protections for workers and transitioning American infrastructure and industry away from fossil fuels.

She would beef up Social Security benefits, at a cost of $3.1 trillion, and provide free or subsidized universal child care, which comes with a $1 trillion price tag. And Warren would make all public colleges tuition-free, while eliminating the student loan debt of tens of millions of Americans. She also wants to invest in K-12 education and affordable housing.

Warren maintains all this additional spending would be covered by taxes and would greatly boost economic growth by helping millions of middle class Americans.But some budget watchers are worried that her plans do not include reining in the nation's debt. The US budget deficit soared to nearly $1 trillion for the 2019 fiscal year, the Treasury Department reported last month, largely due to the 2017 Republican-backed tax cuts.

"You still, after doing all this, haven't addressed the fundamental problem that is the long-term fiscal unsustainability of our current policies," said G. William Hoagland, senior vice president of the Bipartisan Policy Center, a think tank.