Ford wants its cars to 'talk' with traffic lights and pedestrians 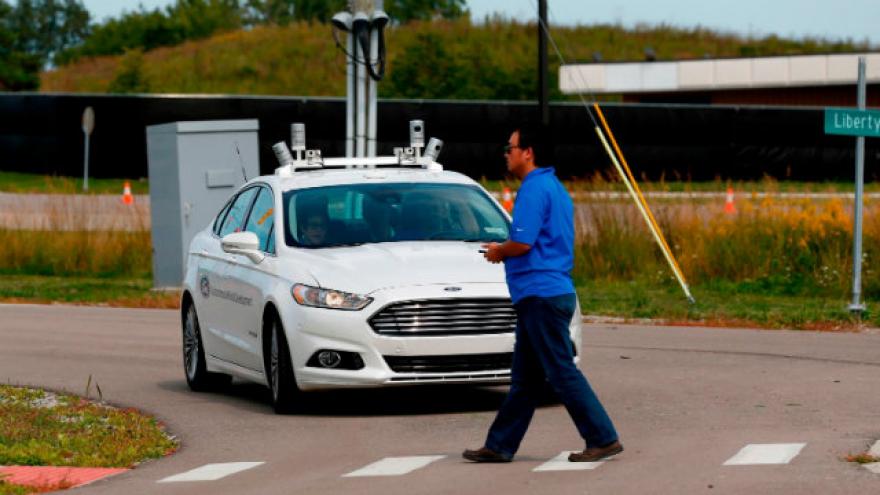 At CES 2019 in Las Vegas on Monday, the automaker announced plans to start selling cars that feature this type of technology in 2022.

The technology, called cellular vehicle-to-everything (or C-V2X for short), uses wireless signals to share road data, such as a car's location or the color of a traffic light, with other vehicles.

Ford believes it will make cities safer by better informing drivers of their surroundings, and compares the innovation to the invention of the traffic light in the 19th century.

"The world's first traffic light [helped] people move through a congested London intersection that had become dangerous for pedestrians due to the popularity of horse-drawn carriages," Don Butler, executive director of Ford Connected Vehicle Platform and Product, wrote in a Medium post. "At Ford, 150 years later, we are excited to continue advancing this type of thinking."

Ford said it is still determining how the technology would work, but a driver might receive an alert — or their car could automatically brake — if a red light or pedestrian was detected ahead. Eventually, Ford envisions C-V2X as an aid for its self-driving cars. (Ford's 380-person self-driving team, Argo AI, is testing vehicles in Pittsburgh.)

But critics says the cost of installing the technology will be burdensome for cash-strapped governments. Corinne Kisner, deputy director of the National Association of City Transportation Officials, called the expense of installing and maintaining vehicle-to-everything technology a major concern. Many municipalities struggle to fill their potholes, let alone install smart city technology. She also described any effort to require a pedestrian to carry a smartphone to guarantee safety as a dangerous paradigm shift.

"It's an unreasonable burden to ask or require people walking in their streets and cities and in front of their homes to carry a signal transmitting device," Kisner said. "The burden needs to be on the driver of the two-ton vehicle, whether it's a human or autonomous technology."

Ford sees things differently. Butler described to CNN Business the example of a pedestrian walking on a dirt road who might be identified by a car with C-V2X because they were carrying a smartphone. Traditionally, a driver would rely on their headlights to see the pedestrian. But Butler stops short of expecting smartphones to be recommended or required for pedestrians.

"It's like the question of will people be permitted to drive once autonomous vehicles become prevalent," Butler said. "That's something we can only speculate about."

Ford isn't the first company to explore outfitting pedestrians with sensors. Siemens, the German conglomerate, began a US Department of Transportation pilot test in Tampa, Florida, last year using pedestrians' smartphones to communicate their location to vehicles. But Siemens officials found the smartphone location data to be so inaccurate that it wasn't useful.

The pilot was reworked to focus on outfitting 1,000 vehicles with sensors, and notifying drivers of nearby vehicles with audio alerts, according to Dave Miller, the head of connected vehicles at Siemens.

Bicycling advocates also argued it was unrealistic to require someone to carry a phone on roads.

"We think the way things are headed, what we need is more smart sensors [built] in the roadway, or infrastructure," Miller told CNN Business.

This is something Ford wants, too. It sees the coming arrival of 5G networks -- the next-generation of internet speed -- as a chance to install vehicle-to-everything technology throughout cities.

"We think there's an opportunity for a win-win that helps offset to a significant degree the cost a city might have to otherwise undertake to deploy this infrastructure," Butler said.

Ford is urging other automakers to install C-V2X in their vehicles.

But there's a long road ahead for Ford to make C-V2X as widespread as the traffic light, which took decades to be popularized.