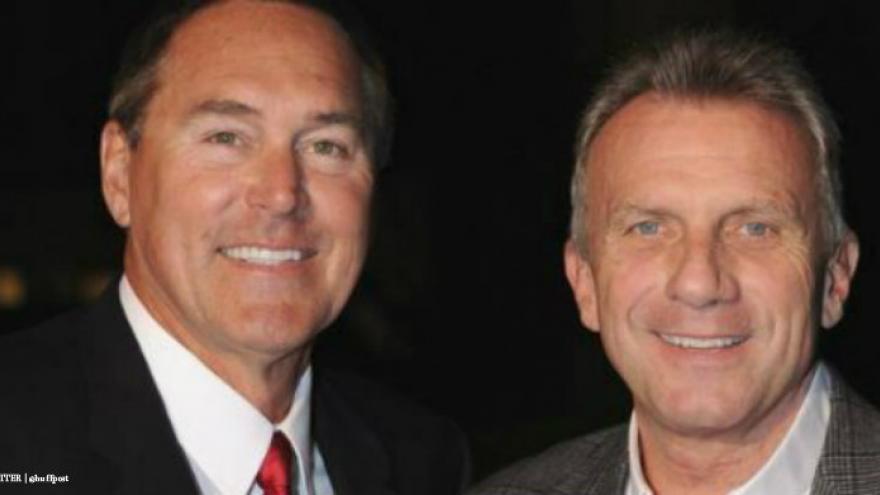 SANTA CLARA, Calif. (AP) — Dwight Clark will forever be remembered for one iconic moment, his leap in the back of the end zone to make a fingertip grab of a game-winning touchdown that launched the San Francisco 49ers dynasty and is one of the most indelible images in NFL history.

Clark, the author of one play simply known as "The Catch," died Monday just more than one year after revealing he had ALS. He was 61.

"My heart is broken," former 49ers owner Eddie DeBartolo Jr. said in a statement. "Today, I lost my little brother and one of my best friends. I cannot put into words how special Dwight was to me and to everyone his life touched. He was an amazing husband, father, grandfather, brother and a great friend and teammate. He showed tremendous courage and dignity in his battle with ALS and we hope there will soon be a cure for this horrendous disease.

"I will always remember Dwight the way he was — larger than life, handsome, charismatic and the only one who could pull off wearing a fur coat at our Super Bowl parade. He was responsible for one of the most iconic plays in NFL history that began our run of Super Bowl championships, but to me, he will always be an extension of my family. I love him and will miss him terribly."

Clark said in March 2017 that he had amyotrophic lateral sclerosis (Lou Gehrig's disease), which attacks cells that control muscles. He suspected playing football might have caused the illness.

The team said he died Monday surrounded by friends and family.

DeBartolo recently hosted a reunion in Montana where many of Clark's former teammates came for one final goodbye.

"It was beautiful because we got to see him smile," said former teammate Roger Craig, who said he almost fainted when he heard the news of Clark's death.

"That's all I wanted to see him smiling. We cried, we all got a taste of Dwight, all we wanted to do is see him smile the whole time we all were there and he smiled the whole time. He made us feel good and I know he felt good knowing he had all those teammates there to support him."

Clark won two Super Bowls with the 49ers during a nine-year career that ended in 1987. He memorably pulled down the winning touchdown pass from Joe Montana in the NFC championship game against the Dallas Cowboys following the 1981 season, a play remembered simply as "The Catch ."

It's considered one of the most significant plays in NFL history and sent the Niners to their first of five Super Bowl titles in a span of 14 seasons.

The play happened on Jan. 10, 1982, when the upstart 49ers hosted the Cowboys in the NFC title game. With the 49ers facing a third down at the Dallas 6 with less than a minute to play, coach Bill Walsh called "Sprint Right Option."

Montana rolled out and retreated under pressure from Ed "Too Tall" Jones and Larry Bethea before lofting the ball toward the back of the end zone. Clark leaped to make a fingertip catch over Everson Walls and the 49ers went on to win the game 28-27 and then their first Super Bowl two weeks later against Cincinnati.

Clark memorably wore a fur coat to the parade.

"Start of a dynasty," said former 49ers president Carmen Policy, who later hired Clark as general manager of the Cleveland Browns. "I don't let myself go down the road of what would have happened if he doesn't make that catch? As Joe Montana says, what would have happened if I didn't throw that pinpoint pass perfectly angled to be in the only spot where he should catch and no one else would be able to interfere with it.

"But without that play, I wonder where we would have been. And I stopped thinking about it, because so much happened after that. And yet, Dwight seemed to handle it in stride and the two of them, The Butch Cassidy and the Sundance Kid, they used to have fun playing off of each other, or who would take the credit, and this and that and so forth. But it was a special day."

Clark joined the Niners as a 10th-round pick out of Clemson in 1979 in the same draft class that brought Joe Montana to San Francisco. He got there by good fortune after only 33 catches in three college seasons as former 49ers coach Bill Walsh needed someone to catch passes from Steve Fuller at a pre-draft workout.

Clark impressed Walsh enough to get drafted and eventually made the team even if he never felt comfortable despite playing on two Super Bowl winners, making two Pro Bowls and catching 506 passes for 6,750 yards and 48 touchdowns in nine seasons with San Francisco.

"He's meant the world to me for so many years," Montana said last year after a street near the site of Candlestick Park was named for him. "We came into the league together and we laugh about things that he did all the time. I don't think he ever unpacked.

Clark made his last public appearance in October when the 49ers hosted "Dwight Clark Day" at Levi's Stadium. Clark spoke to the crowd from a suite that afternoon in a weakened voice, calling his disease a "little thing" he was dealing with at the time. He also thanked the fans and dozens of teammates who came back for the event.

Clark is survived by his wife, Kelly, and three children, daughter Casey, and sons Riley and Mac, from a previous marriage.

"I'm heartbroken to tell you that today I lost my best friend and husband," Kelly Clark said on Twitter. "He passed peacefully surrounded by many of the people he loved most. I am thankful for all of Dwight's friends, teammates and 49ers fans who have sent their love during his battle with ALS."