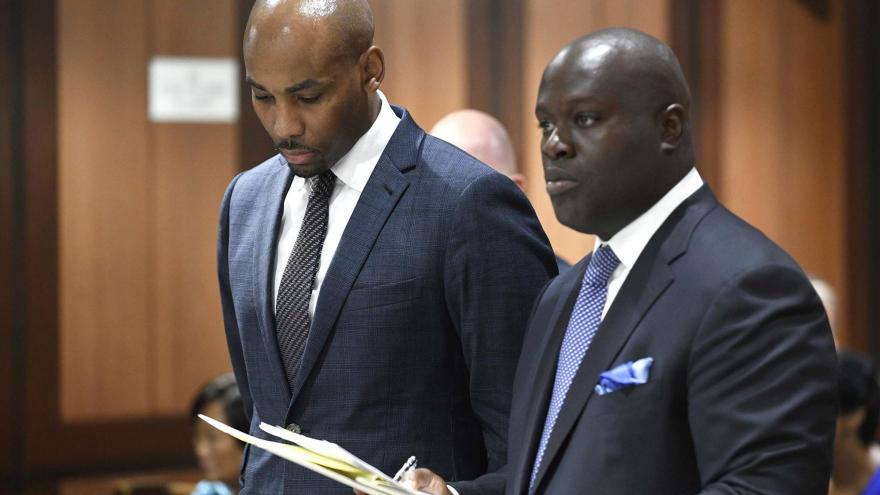 Jamill Jones, left, appears in court in New York in 2018. Jones is a former assistant coach for Wake Forest University's men's basketball team has been sentenced to probation and community service in New York over an incident in 2018 when he punched a man who later died.

(CNN) -- A former assistant coach for Wake Forest University's men's basketball team has been sentenced to probation and community service in New York over an incident in 2018 when he punched a man who later died.

Jamill Jones, 37, was convicted of third-degree assault in February in connection with the death of Sandor Szabo of Boca Raton, Florida, Queens District Attorney Melinda Katz announced. As part of his sentence, Jones will serve three years' probation, must complete 1,500 hours of private community service and pay a fine of $1,000, Katz said.

The two men got into a confrontation around 1:40 a.m. on August 5, 2018, in the borough of Queens and Jones allegedly struck Szabo in the face, according to the New York Police Department.

According to trial testimony, Szabo was walking in the neighborhood after exiting a ride-sharing vehicle. He allegedly wandered over to the back of Jones's car and banged on the window and then ran away.

Jones got out of his car and chased Szabo, ultimately catching up with him and punching him in the face, according to prosecutors.

Szabo fell back, hit his head on the pavement and lost consciousness, according to police. Police say Jones drove away from the scene, and Szabo was transported to a hospital, where he died two days later from his injuries. Szabo had been treated for fractures to the left side of his face and the back of his head, and for bleeding on the brain, according to the complaint filed against Jones.

"This was a tragic incident that ended the life of a man and devastated his family, a violent run-in that should never have happened," Katz said. "Violence is never the answer to settling a dispute."

Jones's attorney Christopher Renfroe told CNN that he found Jones to be a great man and client.

"I wish him the best, and I hope the Szabo family can find some peace," said Renfroe.

Jones resigned from Wake Forest in April 2019. He had been placed on leave after the incident occurred.