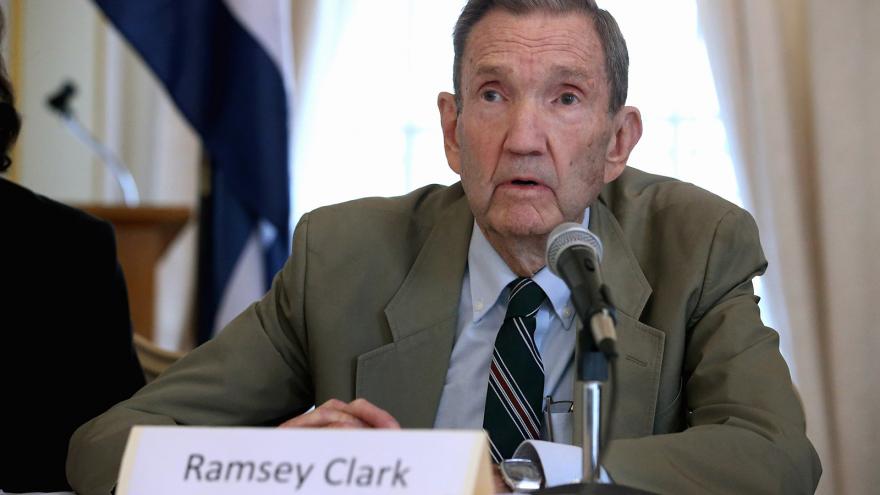 Ramsey Clark, the former US attorney general and legal activist, has died at the age of 93, his granddaughter told CNN. - Chip Somodevilla/Getty Images

(CNN) -- Ramsey Clark, the former US attorney general and legal activist, has died at the age of 93, his granddaughter told CNN.

Clark served as attorney general in President Lyndon B. Johnson's administration in the late 1960s and is recognized for supervising the drafting of the 1968 Civil Rights Act. He later defended controversial international figures, including former Iraqi dictator Saddam Hussein in his trial for crimes against humanity by the Iraqi interim government following his overthrow.

President John F. Kennedy appointed Clark assistant attorney general of the Lands Division in 1961. He investigated integration of schools across the South, first helping supervise the federal presence at the University of Mississippi, according to the Department of Justice. He was promoted to deputy attorney general in 1965 and remained in the role until 1967 when Johnson appointed him attorney general.

After serving as attorney general, Clark -- who had become a vocal critic of the Vietnam War -- twice ran unsuccessfully for Senate in New York. In 1992, he founded the International Action Center, an organization that is "committed to building broad-based grassroots actions opposing U.S. wars abroad while fighting racism and economic exploitation of workers at home," according its website.

Born in Dallas, Texas, in 1927, Clark was the son of former US Attorney General and Supreme Court Justice Tom C. Clark, who resigned from the high court after swearing in his son as attorney general to avoid conflicts of interest. As a member of the Marine Corps, Ramsey Clark served in Europe during World War II. He graduated from the University of Texas and later earned a law degree from the University of Chicago. He worked at his father's Texas firm, Clark, Reed and Clark, before joining the Justice Department.

Clark received the Gandhi Peace Award in 1992 and was a recipient of the Peace Abbey Courage of Conscience Award.