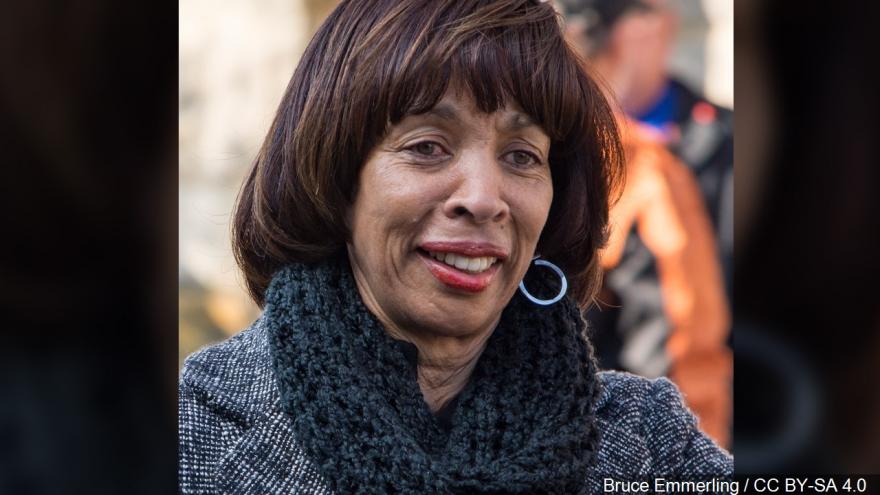 BALTIMORE (AP) — The disgraced former mayor of Baltimore pleaded guilty Thursday to federal conspiracy and tax evasion charges in a case involving sales of her self-published children's books and exposing once again the depths of corruption in the city.

Catherine Pugh pleaded guilty in federal court in Baltimore to conspiracy to commit wire fraud, conspiracy to defraud the government and two counts of tax evasion. She pleaded not guilty to seven counts of wire fraud that were included in the indictment unsealed a day earlier.

The case centers on sales of her self-published "Healthy Holly" books to nonprofits and foundations to promote her political career and fund her run for mayor. Pugh, a longtime Democratic politician who was elected mayor in 2016, resigned under pressure in May.

Pugh faces up to 35 years in prison. U.S. Attorney Robert Hur said she could be sentenced to about five years based on sentencing guidelines, but a judge would make the final determination. Her sentencing is set for Feb. 27.

Pugh only spoke to answer questions from the judge. She mostly rested her face on her hands, occasionally spoke to her attorney and swiveled on her chair.

"I do," she said after U.S. District Judge Deborah Chasanow asked her whether she agreed that several facts presented by prosecutors, including how books were shuffled from a city warehouse, were true.

Wearing a pinstriped dark coat and scarf, she silently walked out of the courthouse flanked by attorneys after the hearing and left in a waiting SUV. Defense attorney Steven Silverman declined to comment.

Hur said Pugh's admissions of guilt "demonstrated that she betrayed the trust placed on her."

Prosecutors explained how Pugh, helped by her aide Gary Brown Jr., double-sold the illustrated paperbacks and failed to deliver them to institutions they were purchased for, including the Baltimore City Public Schools. They said Pugh used the proceeds to fund straw donations to her mayoral campaign and to renovate a house.

Assistant U.S. Attorney Martin Clarke detailed how the University of Maryland Medical System — one of the state's largest employers — came to be Pugh's biggest book customer. The system paid Pugh a total of $500,000 for 100,000 copies that were meant to be distributed to schoolchildren, but about 60,000 of those books were sent to a city warehouse and a Pugh office from where thousands were later removed to give to other customers.

Pugh never delivered the other 40,000 books that the health system purchased for city schools. The system wrote the first check for the books in 2011 and the last one last year.

Pugh, 69, had previously served in the state Senate, where she sat on a committee that funded the medical system. She also sat on the hospital network's board from 2001 until the scandal erupted in March.

The system described some of the purchases as "grants" in federal filings. Pugh returned the last $100,000 payment and described the deal as a "regrettable mistake" after the scheme was uncovered.

Brown and another city employee, Roslyn Wedington, have pleaded guilty to conspiracy to commit wire fraud, conspiracy to defraud the government and filing a false tax return. Their sentencing hearing hasn't been scheduled.

Pugh became Baltimore's second mayor in less than a decade to step down because of scandal. Former Mayor Sheila Dixon left office in 2010 as part of a plea deal for misappropriating about $500 in gift cards meant for needy families.

The charges against Pugh came as the city has struggled with violent crime and other cases of public corruption, as well as a major police scandal. This is the fifth consecutive year the city has had more than 300 homicides.

State Sen. Nathaniel Oaks, a Democrat, was sentenced in 2018 to three and a half years in prison in a bribery case. This year, former Police Commissioner Darryl De Sousa pleaded guilty to three counts of failing to file federal tax returns.

Baltimore also is still grappling with another police scandal: A task force created to get illegal guns off the streets spent years ripping off drug dealers and stealing money from citizens.

Meanwhile, the police department remains under a federal consent decree requiring sweeping reforms. It was authorized in January after the U.S. Justice Department released a scathing report detailing longstanding patterns of racial profiling and excessive force within Baltimore's police force.

Federal authorities began investigating city police following the April 2015 death of a young black man, Freddie Gray, while in the custody of officers.

Baltimore Police Commissioner Michael Harrison, who entered the job in March, has unveiled a plan to lower the high rates of violent crime. He also is seeking to transform a police department that is distrusted by many citizens because of past police misconduct.

In April, Maryland Gov. Larry Hogan signed emergency legislation to overhaul the University of Maryland Medical System's board of directors, after Pugh's shadowy book deals became the public face of a wider self-dealing scandal in the system.

"The people of Baltimore, and all Marylanders, should be able to have confidence in the honesty and character of the people they elect to office," Hogan, a Republican, said Wednesday. "It is completely unacceptable anytime a public official violates the public trust. That's why I pledged to put an end to business as usual, clean up the mess, and restore integrity in government."