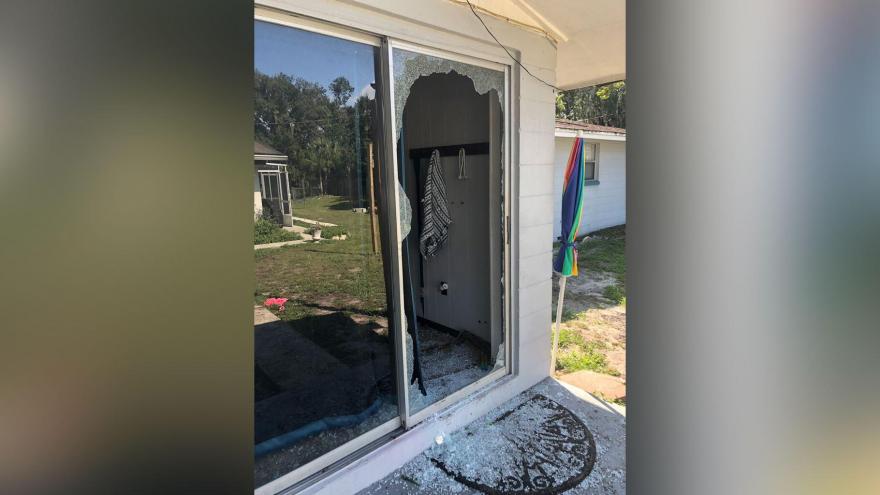 A photo from the Polk County Sheriff shows the aftermath of a quintuple shooting outside Lakeland, Florida, on September 5.

(CNN) -- A former Marine outfitted in body armor fatally shot four people, including a baby, mother and grandmother, at a property outside Lakeland, Florida, early Sunday morning in what the local sheriff called an "active shooter rampage."

The suspect, identified as Brian Riley, 33, then engaged in a firefight with law enforcement officers before surrendering to authorities, but he later attempted to take a gun from an officer at a hospital, Polk County Sheriff Grady Judd said.

Afterward, deputies found four people dead: a 40-year-old man, a 3-month-old baby and the baby's 33-year-old mother inside the home, and the baby's 62-year-old grandmother in a second house on the property, Judd said. The family's dog, Diogi, was also fatally shot, he added.

An 11-year-old girl had been shot multiple times and was airlifted to Tampa General Hospital for surgery. She is expected to recover. Another child who had earlier been missing was located alive and well, Judd said.

"This man killed four people this morning, tried to kill our deputies and then gave up," he said.

In an interview with deputies, the suspect described himself as "a survivalist" and confessed to being on methamphetamine, Judd said. The suspect's girlfriend told authorities that he had been diagnosed with PTSD and had been acting erratically in the past week, saying that he was receiving visions from God, according to the sheriff.

"She said he had PTSD. I've seen him depressed. I've never seen him violent, she said," Judd said. "But a week ago today, meaning last Sunday, he did security at a church in Orlando. And he came home and he said, you know, God spoke to him and now he can talk directly to God. And she said I've never seen that kind of behavior."

The suspect lives in Brandon, Florida, about 20 miles from where the shooting took place. At a press conference Sunday afternoon, Judd said there did not appear to be any connection between the suspect and the victims, and he struggled to explain why the suspect chose that particular family and property.

"We just know we had a madman with a lot of guns that shot and killed innocent people," he said.

The quadruple murder began Saturday evening when a woman called authorities about a suspicious vehicle and said that a man who was parked outside her house told her, "God sent me here to speak with one of your daughters," Judd told reporters on Sunday.

A deputy responded within six minutes and did not find the suspect or the car at the residence, he said.

About nine hours later, at about 4:30 a.m., a deputy two miles away heard two volleys of automatic gunfire. Deputies responded and calls reporting an active shooting began coming in as well, the sheriff said.

On arrival, deputies discovered a truck on fire and heard popping noises from the vehicle. A series of glow sticks were laid out on the yard forming a path, Judd said. There, they saw a man wearing camo who quickly fled inside the home. Then they heard disturbing sounds.

"At that moment in time, we heard another volley and a woman scream and a baby whimper," Judd said.

A lieutenant tried to make entry into the front of the house, but it was barricaded. The lieutenant then went to the back of the house and entered and came upon the same suspect, now outfitted in a bulletproof vest, camo, knee protection and head protection, according to the sheriff.

There was a period of silence, and then the suspect came out with his hands up, Judd said. The suspect, who had been shot once, was taken into custody.

The suspect was taken to Lakeland Regional Hospital where, at one point, he jumped up and tried to grab an officer's gun, Judd said. He was eventually subdued and is being treated. Judd said the suspect will be booked upon release.

Judd said there were "at least dozens if not hundreds" of rounds fired between the suspect and deputies.

"It was a tough situation and it entailed at least two shootouts in close quarter with the suspect," he said.

Photos posted by the Polk County Sheriff showed the extent of the damage to the home on Sunday morning. A glass door appears completely shattered, two windows and a wall are riddled with bullet holes and a burnt truck sits outside the home.

What we know about the suspect

Riley served four years in the Marines and was honorably discharged, and then he did another three years in the reserve, Judd said. He was deployed to Iraq in 2008 and Afghanistan in 2009-2010 as a designated sharpshooter, the sheriff said.

Riley was employed by ESS Global Corp as a body guard and to provide security, Judd said. He has a concealed weapon's license and virtually no criminal history.

"We're not dealing with a traditional criminal here. What we're dealing with is someone who obviously had mental health issues at least this last week, had PTSD," Judd said.

While in custody, the suspect told deputies that he was a "survivalist," the sheriff said. The term generally refers to a person who proactively prepares for a post-apocalyptic world.