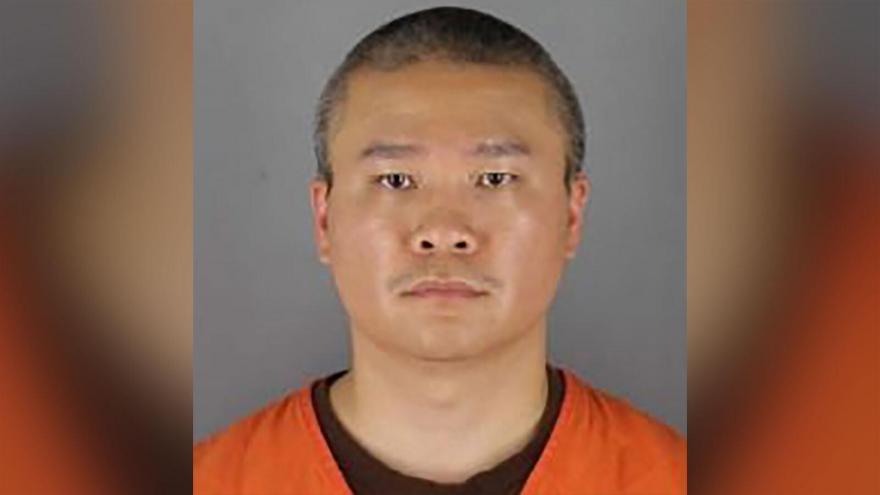 Minneapolis police officer Tou Thao responded on May 25 to the scene where officers Thomas Lane and J. Alexander Kueng were trying to detain George Floyd for allegedly attempting to cash a phony bill.

(CNN) -- A now-fired Minneapolis police officer told federal investigators looking into the death of George Floyd that a call for backup from one of the officers on the scene sounded "like it was urgent," according to a video of the interview released Friday.

Minneapolis police officer Tou Thao responded on May 25 to the scene where officers Thomas Lane and J. Alexander Kueng were trying to detain Floyd for allegedly attempting to cash a phony bill.

Floyd was later restrained on the ground. While Thao stood nearby, Lane, Kueng and officer Derek Chauvin kept Floyd pinned to the ground while Floyd pleaded with officers that he couldn't breathe.

During the roughly hour and a half long interview, Thao told FBI agents the call for backup from an officer on scene sounded "like it was urgent in his voice." He said he heard that there was "a forgery in progress."

Thao told investigators that after he arrived, he saw a police vehicle's door open and that Floyd resisted efforts to voluntarily sit in the vehicle.

"Floyd is a bigger guy. He's bigger than all of us," Thao said. "He's yelling... doesn't want to go into the squad car."

As the other officers struggled to get Floyd in the car, Thao said he suggested putting Floyd on the ground. He told agents he said: "Alright guys, it's pointless to do this. Let's put him on the ground."

Thao described the crowd gathering around the scene as "hostile," saying he had to tell people several times to get off the street and that he even had to push someone back toward the sidewalk.

It led Peterson to ask, "Is that them being hostile or was that them trying to alert your attention that something was going on with Mr. Floyd?"

Thao said that while he was talking with Kueng after paramedics arrived and began performing lifesaving efforts on Floyd that, "It looks like this guy is being worked on so this could potentially be a critical incident if he dies ... I don't know his status but they're doing CPR."

Thao said that much of his time on the scene was spent backing up the officers and keeping an eye on the crowd that had gathered on the sidewalk, some of whom were yelling at the officers.

When asked by the FBI agents if there was ever any suggestion that the officers just talk to Floyd and see what the problem is, Thao said that he assumed the officers did that, and that he was not the contact officer. He said he did not attempt to do that.

The video cuts off toward the end of the interview. Agents also asked Thao if he ever saw Floyd cease to struggle. Thao responded that he maybe peaked a couple of times while watching the crowd. He told the agents that Floyd was just lying there.

The release of this footage comes the day after video from Thao's bodycam was released showing him trying to control a crowd of bystanders who had become increasingly upset as police held Floyd down, pleading with officers to get off him and check his pulse.

Thao said that although a dispatcher had waved him off while he was halfway to the scene, he continued to add support because he knew that the area was dangerous.

Thao said that even though he had known Chauvin for roughly three years, the two didn't talk much when off duty.

"We really don't talk much outside of work," he told the agents.

None of the officers have entered formal pleas. Attorneys for Thao and Lane have asked the cases against them be dismissed, and Kueng's attorney says his client intends to plead not guilty.

CNN reached out to attorneys representing the four former officers for comment on Friday.

Attorneys for Chauvin and Kueng did not wish to comment, while lawyers for Thao and Lane did not immediately respond.