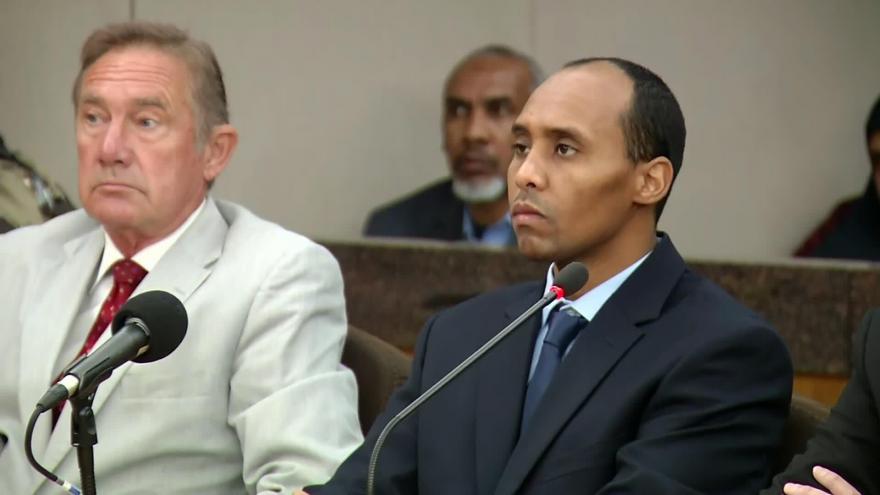 (CNN) -- The former Minneapolis police officer who fatally shot a woman while responding to her 911 call in 2017 was resentenced Thursday to 4 years and 9 months in prison after Minnesota's highest court threw out his third-degree murder conviction last month.

Mohamed Noor was originally sentenced to 12.5 years in prison for shooting and killing Justine Ruszczyk in July 2017. Last month, the Minnesota Supreme Court vacated Noor's third-degree murder conviction, ruling there was insufficient evidence to sustain the conviction and ordering Noor be sentenced on his conviction for second-degree manslaughter, a lesser charge.

The new sentence is at the top of the range of state sentencing guidelines, which provide for a punishment of 41 to 57 months for someone with no prior criminal record. Noor's attorney had asked the court to impose a sentence of 41 months, while prosecutors sought the maximum sentence for the remaining second-degree manslaughter conviction.

Noor will receive credit for the 908 days he's already served, the judge said Thursday. According to Minnesota law, he is required to serve two-thirds of his sentence before he will be eligible for supervised release. Noor has been incarcerated since his conviction in 2019, according to records from the Minnesota Department of Corrections.

In handing down the sentence, Judge Kathryn Quaintance pointed to the fact Noor shot "across the nose" of his partner and also endangered residents in the surrounding community.

"These factors of endangering the public make your crime of manslaughter appropriate for a high-end" of the sentencing guidelines, she said.

Noor's lawyer argued at trial that a "perfect storm" of events led to the officer opening fire on Ruszczyk, who had called 911 the night of July 15, 2017, to report a possible assault in progress in an alley behind her home.

Noor feared for his partner's life, he testified, as Ruszczyk approached their squad car in an alley. But Hennepin County prosecutors argued Noor overreacted and failed to properly assess the situation before firing a gunshot into Ruszczyk's abdomen.

The death of Ruszczyk, who moved to Minneapolis from her native Australia to live with her fiancé, attracted widespread attention in both the United States and Australia.

Ruszczyk's fiancé, Dan Damond, appearing in court via video call, publicly forgave Noor on Thursday, saying it was what Ruszczyk herself would do.

"Justine was and is still my greatest teacher," Damond said. "Given her example, I want you to know that I forgive you, Mohamed. All I ask is that you use this experience to do good for other people. Be an example of how to transform beyond adversity."

Prior to his resentencing, Noor said he was "deeply grateful" for Damond's forgiveness and apologized for the pain he'd caused Ruszczyk's family.