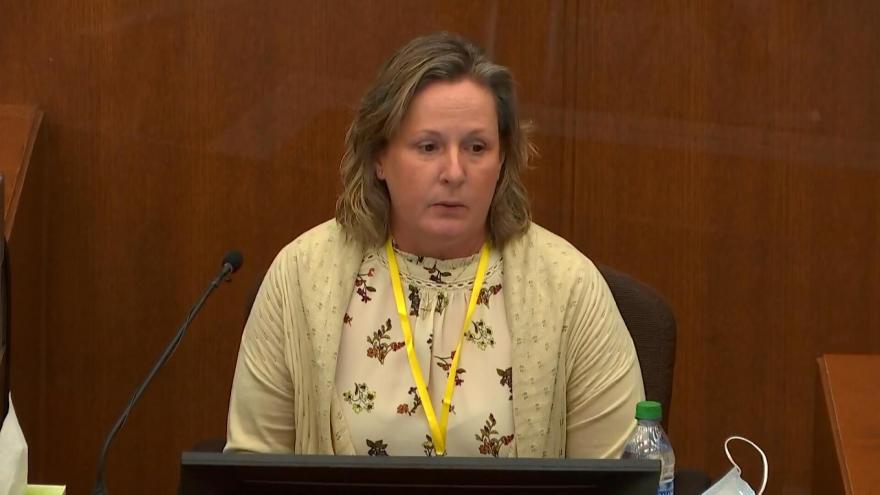 Former Brooklyn Center police officer Kim Potter testified in her own trial. Potter is due back in court February 18 to be sentenced.

(CNN) -- Kim Potter, the former Minnesota police officer who mistakenly drew a gun instead of a Taser and fatally shot Daunte Wright during a traffic stop, was sentenced on Friday to two years in prison.

The sentence comes nearly two months after Potter was convicted of first- and second-degree manslaughter. Prosecutors had requested seven years and two months while Potter's attorneys argued for a lesser sentence, pointing to her lack of a prior criminal history and remorse for Wright's death.

Potter will be required to serve two-thirds of her sentence in prison, or 16 months, according to state law. With good behavior, she will be eligible for supervised release for the remaining third.

In justifying it, she pointed to several mitigating factors, saying it was undisputed that Potter never intended to use her gun. Chu told the court she took into account the four reasons for incarceration -- retribution, incapacitation, deterrence and rehabilitation -- saying retribution would be the only purpose served in Potter's case.

"There rightfully should be some accountability," she said.

But Potter is a "cop who made a tragic mistake," the judge added. "She drew her firearm thinking it was a Taser, and ended up killing a young man."

"The other officer cases tried in this court are distinguishable," she said, alluding to the cases of Derek Chauvin, who was convicted of murdering George Floyd, and Mohamed Noor, who was convicted in the death of Justine Ruszczyk.

Wright's family was "completely stunned" by the sentence, their attorney Ben Crump said in a statement.

"While there is a small sense of justice because she will serve nominal time, the family is also deeply disappointed there was not a greater level of accountability," the statement said. "The Judge's comments at sentencing showed a clear absence of compassion for the victim in this tragedy and were devastating to the family."

Shortly before she was sentenced, Potter tearfully apologized to Wright's family, saying, "I am so sorry that I brought the death of your son, father, brother, uncle, grandson, nephew, and the rest of your family," adding, "I'm sorry I broke your heart."

"I do pray that one day you can find forgiveness," the former officer said, "only because hatred is so destructive to all of us."

Potter also apologized to the city of Brooklyn Center, saying she loved working for the community and that those who still do are "good, honorable people."

After Friday's hearing, Wright's mother told reporters her family was "very disappointed" with the sentence.

"This is the problem with our justice system today. White women tears trumps justice," Katie Wright said. She thought her own "White woman tears would be good enough," she said, "because they're true and genuine."

"They were so tied up into her feelings and what's going on with her," Arbuey Wright said, referring to Potter, "that they forgot about my son being killed."

Earlier Friday morning, Wright's parents, two siblings and the mother of his child stood at a podium in court and urged the judge to impose the maximum possible sentence. Wright's mother said Potter was a "police officer that took an oath to serve and protect for 26 years."

"But not on this day. On this day, she did not protect," she said. "She failed Daunte, our family and our community."

Chyna Whitaker, the mother of Wright's son, Daunte Wright Jr., said in her own victim impact statement that Potter had taken away her son's best friend.

The 2-year-old doesn't fully understand his father's absence but he senses it, she said. She sometimes finds her son staring at a poster of his father in his bedroom. And when shown photos or videos of Wright, the child smiles, she said, and says "Dada."

"My son shouldn't have to wear a 'rest in peace' shirt of his dad," Whitaker said, asking for the maximum sentence.

Under Minnesota law, an offender convicted of two or more charges from the same act is sentenced on their most serious conviction. The maximum penalty for first-degree manslaughter predicated on reckless use/handling of a firearm is 15 years in prison and/or a $30,000 fine.

However, under the state's sentencing guidelines, a judge has discretion to sentence convicted offenders with no prior criminal history, like Potter, to between roughly six- and eight-and-a-half years in prison.

Minnesota Attorney General Keith Ellison asked Chu to impose the presumptive sentence of 86 months in a sentencing memo filed Tuesday. That sentence, he wrote, would reflect the "seriousness of the loss of (Wright's) life" as well as Potter's "culpability" in causing Wright's death.

Friday was a "somber day," Ellison said in a statement, but he accepted Chu's decision, urging everyone to do the same.

"I don't ask you to agree with her decision, which takes nothing away from the truth of the jury's verdict. I know it is hurtful to loved ones of Daunte Wright," he said. "I ask that we remember the beauty of Daunte Wright, to keep his memory in our hearts, and to know that no number of years in prison could ever capture the wonder of this young man's life."

The attorney general hopes more can be done to prevent weapons confusion, he said, adding Potter could "make a powerful contribution."

Officer said she mistook her gun for Taser

Wright's shooting occurred as Chauvin stood trial in Minneapolis for murdering Floyd and prompted days of unrest in Brooklyn Center, reigniting demonstrations in a metropolitan area that has time and again found itself the epicenter of conversations about policing and use of force.

Wright was pulled over by police on April 11 for an expired tag and illegal air freshener, according to authorities. During the stop, police learned Wright had an outstanding warrant, and when Potter and a trainee officer attempted to arrest him, Wright tried to drive off.

Video of the incident shows Potter, a 26-year police veteran, repeatedly yell "Taser" before she shot Wright with her handgun.

Potter's trial focused on her fatal error: Prosecutors attributed it to Potter's recklessness and negligence, while defense attorneys argued it was an honest, tragic mistake -- but not a crime.

"Accidents can still be crimes if they occur because of recklessness or culpable negligence," Assistant Minnesota Attorney General Erin Eldrige said in her closing argument. "It's not a defense to the crimes charged."

Potter's attorney Earl Gray argued the former officer was within her rights to use deadly force to protect a fellow officer, who was reaching into the vehicle when Wright attempted to drive away.

More than 30 witnesses testified during eight days of testimony, including Potter, who broke down in tears as she described the shooting and the moments leading up to it, telling the court, "I didn't want to hurt anybody."

"I was very distraught. I just shot somebody. I'm sorry it happened," she said after a prosecutor asked about her behavior following the shooting. "I'm so sorry."

The jury ultimately found Potter guilty after deliberating for about 27 hours.

Potter has been incarcerated since her conviction at a correctional facility in Shakopee, about 25 miles southwest of Minneapolis, according to records from the Minnesota Department of Corrections.