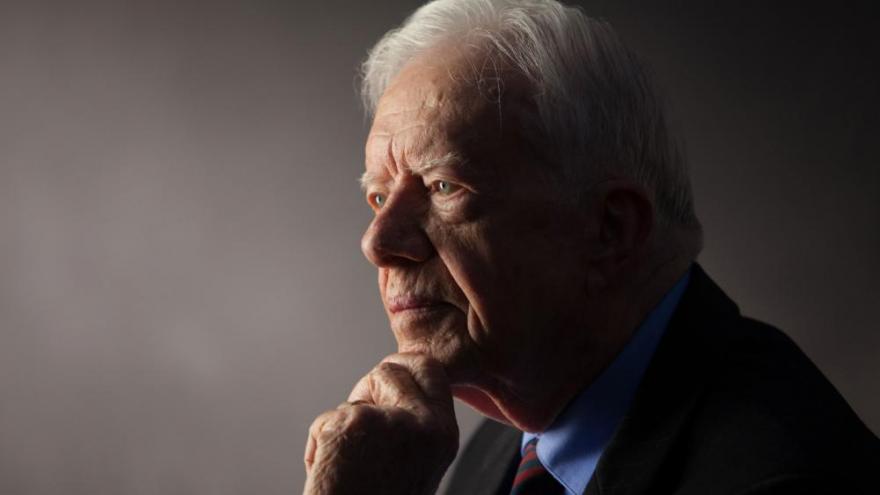 Former President Jimmy Carter was discharged from a Georgia hospital on Wednesday afternoon, according to the Carter Center.

(CNN) -- Former President Jimmy Carter was discharged from a Georgia hospital on Wednesday afternoon, according to the Carter Center.

"He said he looks forward to further rest and recovery at home in Plains, Georgia. He and Mrs. Carter wish everyone peace and joy this holiday season," according to a statement from the Carter Center.

The 95-year-old Carter was admitted to Phoebe Sumter Medical Center in Americus, Georgia, last weekend for a urinary tract infection.

Carter had previously been admitted to the hospital on November 11 for a procedure to relieve pressure on his brain. The pressure was caused by bleeding from his recent falls, the Carter Center said at the time. He was released from that stay the day before Thanksgiving.

Carter, who has survived brain and liver cancer, was also hospitalized twice in October and needed 14 stitches above his brow after his first fall, when he hit his forehead "on a sharp edge." He then received treatment for a minor pelvic fracture after his second fall.

"I would definitely not want to say that this is the beginning of the end," he said.

Despite his age and the health complications, Carter hasn't eased off his unrelenting volunteer schedule.

Along with his wife, Rosalynn Carter, he has volunteered for Habitat for Humanity for 35 years, building homes all over the United States and around the world.

"I fell down and hit my forehead on a sharp edge and had to go to the hospital. And they took 14 stitches in my forehead and my eye is black, as you've noticed. But I had a number one priority and that was to come to Nashville and build houses," Carter said to a group of volunteers the same day he was hospitalized last month.

Carter also said in November that he had found he was "was absolutely and completely at ease with death" after doctors told him in 2015 that his cancer had spread to his brain.

"I assumed, naturally, that I was going to die very quickly," Carter said during a church service in his hometown of Plains, Georgia. "I obviously prayed about it. I didn't ask God to let me live, but I asked God to give me a proper attitude toward death. And I found that I was absolutely and completely at ease with death."