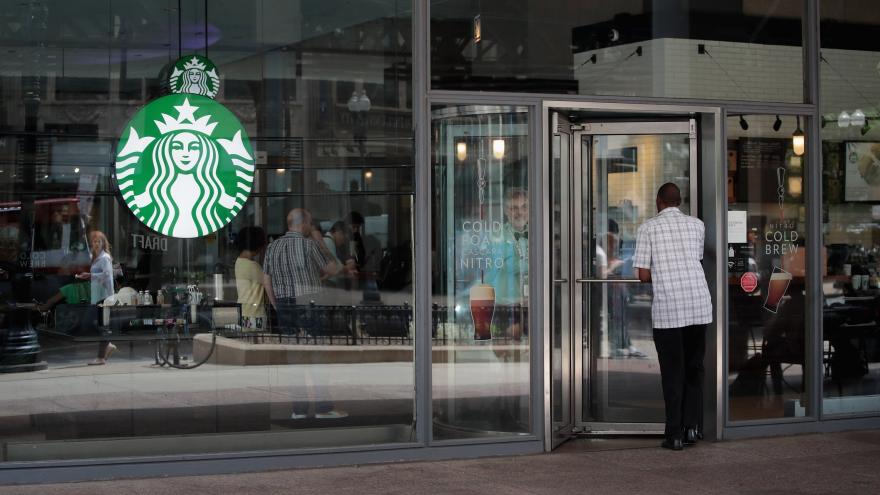 (CNN) -- A former Starbucks regional director has sued the company for wrongful termination, alleging the company discriminated against her in the aftermath of a highly publicized arrest of two black men at a Starbucks store in Philadelphia in April 2018.

Shannon Phillips, who is white, alleges she was fired the following month after 13 years with the company because she opposed placing a white employee on administrative leave for unrelated alleged discriminatory conduct.

That employee had not discriminated, Phillips says, and he was not connected to the store where the two black men were arrested.

Phillips believes Starbucks "took steps to punish white employees who had not been involved in the arrests, but who worked in and around the city of Philadelphia, in an effort to convince the community that it had properly responded to the incident," the lawsuit states.

A spokesperson for Starbucks said Friday: "We deny the claims in this lawsuit and we are fully prepared to defend our case in court."

Street protests occurred in April 2018 because of the incident at a Philadelphia Starbucks.

Donte Robinson and Rashon Nelson were asked to leave the coffee shop after sitting at a table without ordering anything. The men, who declined to leave because they were waiting for a business associate, were escorted out of the coffee shop in handcuffs after a store manager called police on them.

Robinson and Nelson later reached settlement agreements with Starbucks and the City of Philadelphia.

Phillips' lawsuit was filed this week in US District Court in New Jersey.

The regional director was told 'the situation is not recoverable'

Phillips was formerly tasked with overseeing operations of Starbucks stores in Southern New Jersey, the Philadelphia region, Delaware, and parts of Maryland, her complaint states. Two district managers who oversaw stores in Philadelphia reported to her, including the district manager who was responsible for a group of stores containing the one where Robinson and Nelson were arrested.

Phillips says she assisted in Starbucks' community response to the incident and was encouraged to apply for a temporary position to support the company's Government and Community Affairs Unit - a position she was later told was put "on hold," according to the lawsuit.

After a settlement was reached with Robinson and Nelson in early May, Phillips claims she was asked to put one of her district managers, a white male, on suspension for allegedly paying non-white employees less than their white counterparts.

Phillips' lawsuit says that was "factually impossible" because district managers could not determine salaried employee compensation due to Starbucks' own policies and procedures.

Her lawsuit states that the district manager had worked for Starbucks for 15 years, and that she had never observed any racially discriminatory comments or conduct from him.

In the lawsuit, Phillips said the district manager was not responsible for the store where the two black men were arrested and had no involvement in the incident, but that a black district manager who did oversee that store was neither fired nor placed on suspension.

On May 8, Phillips was told she would be fired and that the only reason given for her termination was that "the situation is not recoverable," according to her complaint.

She alleges she was replaced by "substantially less qualified employees who had not complained of race discrimination."

Phillips is seeking an unspecified amount of compensatory and punitive damages, as well as money for legal fees. She is also asking the court to declare that Starbucks violated her civil rights through unlawful employment discrimination, the lawsuit states.