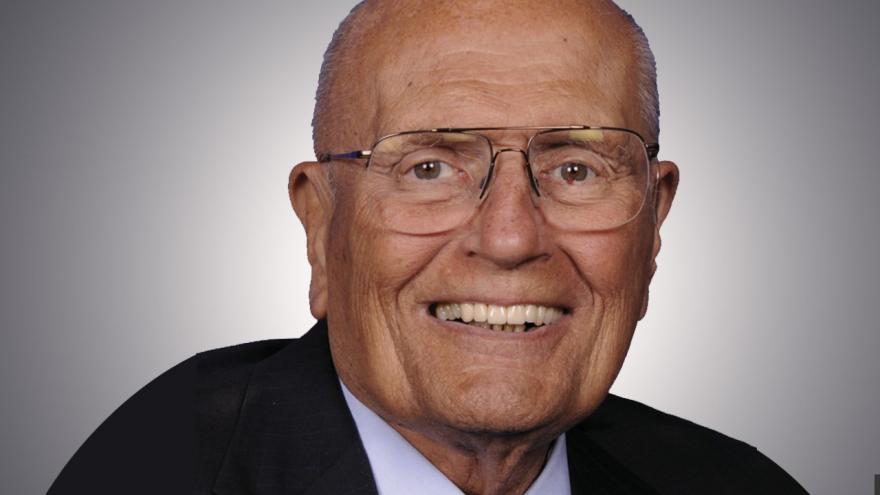 (CNN) -- Former Rep. John Dingell, the longest serving member of Congress on record and a politician whose voice loomed large even after he left Capitol Hill, passed away Thursday. He was 92.

"It is with a heavy heart that we announce the passing of John David Dingell, Jr., former Michigan Congressman and longest-serving member of the United States Congress," the office of his wife, Rep. Debbie Dingell, D-Michigan, said in a statement. "Congressman Dingell died peacefully today at his home in Dearborn, surrounded by his wife Deborah. He was a lion of the United States Congress and a loving son, father, husband, grandfather, and friend. He will be remembered for his decades of public service to the people of Southeast Michigan, his razor sharp wit, and a lifetime of dedication to improving the lives of all who walk this earth."

The Michigan Democrat was a lion in the House for decades and a longtime committee chairman. In more recent years, he became known for his witty Twitter account and criticism of President Donald Trump's administration.

"John Dingell was a giant legislator on behalf of the people," said House Majority Leader Steny Hoyer. He described Dingell as a "tireless advocate" who fought for clean air, clean water, consumer protections and financial regulations throughout his nearly six decades in Congress.

Of that time, he served on the Energy and Commerce Committee for nearly 58 years, making Dingell the longest serving member on any congressional committee. He served as chairman of the committee for more than 15 years.

Dingell, whose district was home to the Ford Motor Company, had long been a strong supporter of the auto industry but also stressed environmental issues over the years. He played a key role in helping pass signature pieces of legislation such as the Civil Rights Act, Medicare, the Clean Water Act, the Clean Air Act, the Endangered Species Act and the Affordable Care Act, more commonly known as Obamacare.

"I think he will go down in history as one of the most impactful members of the United States Congress," said Democratic Caucus Chair Hakeem Jeffries of New York. "And he's a great tweeter as well."

With the expansion of Twitter, Dingell became known for his commentary on current events through snarky and sometimes hard-hitting tweets that often went viral. He built a following of more than 250,000 users, dwarfing that of many current members of Congress.

Trump has been the subject of his criticism in recent years, but more broadly, Dingell has been knocking what he describes as a decline in institutionalism.

"In my six decades in public service, I've seen many changes in our nation and its institutions. Yet the most profound change I've witnessed is also the saddest," he wrote in a December op-ed for The Atlantic. "It is the complete collapse in respect for virtually every institution of government and an unprecedented cynicism about the nobility of public service itself."

Dingell favored abolishing the Senate, where legislation faces a higher threshold for passage, and combining the two chambers into one.

"It will take a national movement, starting at the grassroots level, and will require massive organizing, strategic voting, and strong leadership over the course of a generation," he wrote. "But it has a nice ring to it, doesn't it? 'Abolish the Senate.' I'm having blue caps printed up with that slogan right now. They will be made in America."

John David Dingell Jr. was born July 8, 1926 in Colorado Springs, Colorado. He was exposed to politics at an early age when his father was elected to the House in 1932. The young Dingell then served as a House page and attended the Capitol Page School from 1938 to 1943.

"We saw some rather great things," Dingell said in a 2012 oral history interview with the office of the House historian. "The President (Franklin D. Roosevelt) declared war the day after the Japanese bombed Pearl Harbor (December 8, 1941). We saw Winston Churchill on the 26th of December, 1941, when he came to address the Congress."

When he was 18, Dingell enlisted into the US Army, almost three years after he watched Roosevelt deliver his famous "Day of Infamy" address to Congress.

After his father died while in office 1955, Dingell was elected to the seat in a special election at the age of 29. He was then re-elected to 29 more congressional sessions, until he decided not to run for re-election in 2014. His wife, Debbie, succeeded him and remains in the seat today.

Dingell's service, combined with that of his father and his wife, marks the longest consecutive service in Congress for a single family: nearly 86 years.