Biden eulogizes Madeleine Albright: 'She turned the tide of history' 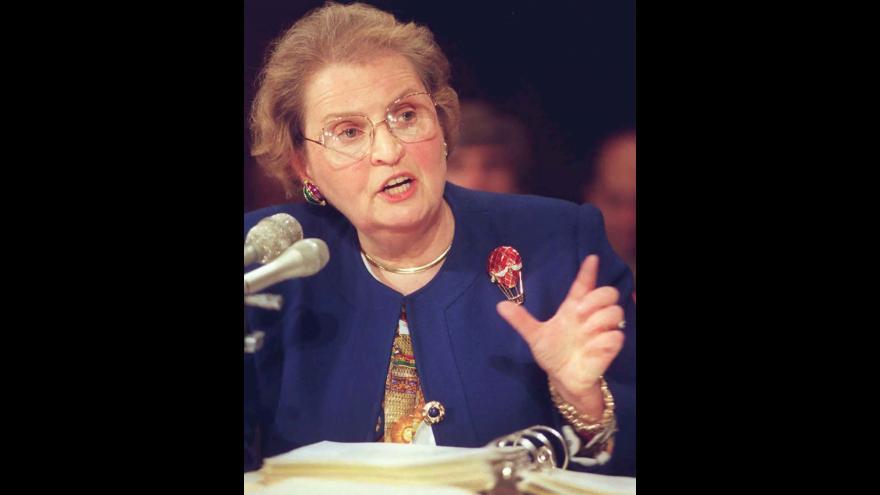 President Joe Biden pays his respects at the casket of former Secretary of State Madeleine Albright during a funeral service at the Washington National Cathedral in Washington, DC, on April 27.

(CNN) -- President Joe Biden on Wednesday eulogized Madeleine Albright, describing the first female US secretary of state as a "force of nature" and a champion of democracy.

"With her goodness and grace, her humanity and her intellect, she turned the tide of history," Biden said during the funeral service at the Washington National Cathedral.

The President said, "She always had a knack for explaining to the American people why it mattered to them that people everywhere in the world were struggling to breathe free."

The President said he learned of Albright's passing as he was traveling to Europe for an emergency meeting with NATO allies to discuss Russia's invasion of Ukraine.

"It was not lost on me that Madeleine was a big part of the reason NATO was still strong and galvanized, as it is today," Biden said.

The President said Albright remained a "nexus of the foreign policy community" in the decades after she left office.

Albright, Biden said, was "always, and I mean always, on top of the latest developments. Always speaking out for democracy, and always the first to sound the alarm about fascism."

"Presidents and leaders around the world continued to solicit her advice, including me," Biden said.

The President praised Albright's diplomatic skills and said part of the reason he believed she was so effective is that "she understood something I've always believed: That all politics, especially international politics, is personal."

Biden described Albright as an advocate for young women in national security, always ensuring they had a seat at the table, and a mentor to "generations of rising foreign policy experts."

Albright, who died in March from cancer at the age of 84, is expected to be remembered by her friends and family, several current and former US government officials, American presidents, secretaries of state, foreign leaders and diplomats, as well as several Democratic and Republican members of Congress. More than 1,400 people were expected to be in attendance.

Albright was a central figure in former President Bill Clinton's administration, first serving as his US ambassador to the United Nations before he picked her in his second term to be the first female secretary of state. In office, she championed the expansion of NATO, pushed for the alliance to intervene in the Balkans to stop genocide and ethnic cleansing, sought to reduce the spread of nuclear weapons and promoted human rights and democracy across the globe.

Several current and former federal officials are included in the lineup of readers and intercessors, including Wendy Sherman, a US deputy secretary of state; Condoleezza Rice, a former secretary of state and a former student of Albright's father; and Susan Rice, who leads the White House Domestic Policy Council.

Several other Biden officials were also in attendance, including Secretary of State Antony Blinken, Secretary of Defense Lloyd Austin, Secretary of Veterans Affairs Denis McDonough and US climate envoy John Kerry, a former secretary of state.

Along with several honorary pallbearers, the pallbearers at Wednesday's service will be comprised of Albright's diplomatic security service and protective detail during her time as an ambassador and as secretary of state.

Born Marie Jana Korbelova, the daughter of a Czechoslovakian diplomat, in Prague in 1937, Albright escaped her home country with her family 10 days after the Nazi invasion. Her experience growing up in communist Yugoslavia and then fleeing to the US made her a lifelong opponent of totalitarianism and fascism.

Albright became a face of US foreign policy in the decade between the end of the Cold War and the war on terror triggered by the September 11, 2001, attacks -- an era heralded by President George H.W. Bush as a "new world order." The US, particularly in Iraq and the Balkans, built international coalitions and occasionally intervened militarily to roll back autocratic regimes. Albright -- a self-identified "pragmatic idealist" who coined the term "assertive multilateralism" to describe the Clinton administration's foreign policy -- drew from her childhood experiences growing up in and fleeing Yugoslavia to shape her worldview.

Following her tenure as secretary of state, Albright served as chairwoman of the National Democratic Institute for International Affairs in Washington from 2001 to her death, and she taught at Georgetown University. Albright was also a prolific author, penning seven New York Times bestsellers.

At Wednesday's service, former teaching assistants who worked in Albright's classes at Georgetown are expected to serve as ushers.