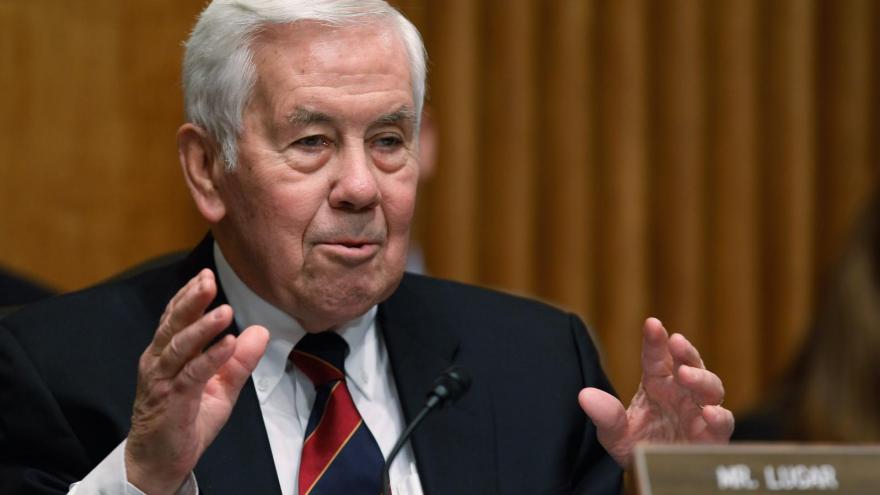 "His loving wife Char, his four sons Mark, Bob, John, and David and their families were with him throughout his short illness in the hospital," the center's announcement read.

Lugar, a longtime Republican senator and foreign policy leader, served in the Senate from 1977 to 2013. He was unseated in a 2012 primary and went on to helm the Lugar Center, whose work focuses in part on nonproliferation.

"Senator Richard Lugar is a towering figure in Hoosier history and one of the greatest statesmen ever to serve in the U.S. Senate. As our longest serving Senator, he worked tirelessly with leaders across the globe to better the state and the country he loved," Indiana Republican Sen. Mike Braun said in a tweet on Sunday. "Maureen and I are praying for the Lugar family in this difficult time."

Purdue University President and former Indiana Gov. Mitch Daniels, who served for years as Lugar's chief of staff before becoming governor, said in a statement later Sunday that Lugar was "not just the finest public servant I will ever know, he was the finest person."

"He embodied all we can hope for in our leaders: brilliance of mind, purity of motive, stainless in character, tireless in the pursuit of duty. Incomparably knowledgeable about the world, he was first and always a patriot, utterly dedicated to the security and wellbeing of his fellow Americans," Daniels said. "His voice is now silent, but he is still with us. Indianapolis is a thriving and vibrant city because of him. The world is safer from nuclear danger because of him. And so many of us, while falling far short of the standards he set, are vastly better people because of him."

A Rhodes Scholar and member of the Navy, Lugar was mayor of Indianapolis before his move to the Senate, where he worked for decades, according to a biography from his center.

Members of both sides of the aisle praised Lugar during his time in the public sphere, and months after he left office, then-President Barack Obama named him a recipient of the Presidential Medal of Freedom, saying in a statement at the time that the former Indiana Republican was an "internationally respected statesman."

In a statement marking Sunday's news, Obama recalled his ties with Lugar dating back to his time as a freshman senator, when Obama said Lugar took him under his wing. Obama heralded the late senator as a "problem-solver" rather than a partisan whose nonproliferation efforts increased global safety.

"Today, thousands of warheads, bombers, and submarines no longer threaten us because of Dick's work," Obama's statement said. "America is safer because of Dick; the world is, too. His passing is a reminder of the constant and pressing need to expand international nonproliferation agreements. And it's a call to remember what a public servant can be."

Former Vice President Joe Biden offered condolences from himself and his wife Jill Biden in a tweet mourning Lugar as a "dear friend."

And Vice President Mike Pence, a former Indiana governor, issued a statement on Sunday lamenting the loss of a fellow Hoosier who he counted as "a friend and mentor."

"He leaves behind a legacy of public service that will inspire Hoosiers for generations," Pence's statement said.

Lugar's 2012 primary loss was seen at the time as part of a trend of establishment figures losing ground to insurgent conservatives. After his defeat, he defended his decisions in office -- including some that may have hurt him in the primary race -- as "the right votes for the country."

"I stand by them without regrets," Lugar's post-primary statement read.

His successful challenger, Richard Mourdock, would later lose to Democrat Joe Donnelly, who in turn lost the seat to Braun last fall.